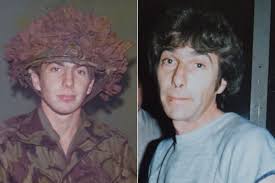 The following is a powerful political poem from Alan Morrison’s upcoming collection of poetry Tan Raptures:

Her son, compelled, the country’s foes had fought,
Had bled in battle; and the stern control
Which ruled his sinews and coerced his soul
Utterly poisoned life’s unmingled bowl,
And unsubduable evils on him brought.

‘A Tale of Society as It Is: From Facts, 1811’ by Percy Bysshe Shelley

‘Sorry for your loss but no errors were made’
Only those within the margins of human decency –
Well outside the remit of the Dee Double-u Pee,
Only Work Programmes and the worst laid schemes;
No searching of consciences, only search engines on bogus
Job sites of phantom vacancies, and plenty of penalties,
Plethora of sanctions, interrogations, black spots –
And threats of all these; dockets for food banks,
Sticks without carrots, punishments, punishments,
Roll up, roll up for punishments –all at the expense
Of soul-and-body nourishments: treat the poor and
Unemployed as if they were pirates ransacking
The public purse (supplied by “hardworking taxpayers”),
Daylight-dodgers rolling giros, Black Dog “Scroungers”;
Make the unemployed walk the plank, Nudge ’em, nudge ’em,
Keelhaul ’em; and as for those malingerers, keep on
Their case, badger them –Sheriff stars for badges, Targets,
Targets, throw Atos darts at ’em, “disrupt and upset” them;
Cap their benefits, splice the mainbrace, clap them in
Irons of no income, as they did with Clapson:
Penalised for missing a jobcentre appointment, stripped
Of his £71.70 weekly allowance, died penniless
And half-starved at 59, collapsed from ketoacidosis
Because he couldn’t chill his life-sustaining insulin
In the fridge for the electricity had been cut off
As a result of losing his benefits, all for missing
One single appointment on the Work Programme…

(Mark Wood, a painter, poet and music composer,
Went the same way after Atos declared him “fit for
Work” and stopped his benefits, a verdict he sleepily
Accepted –since he always worked at his poetic
Occupations, soul’s vocations– and one which sapped
His appetite; fitting, since he could no longer afford
To feed himself: when he finally passed out, then passed
Away, aged 44, six stone was all he weighed…)

Clapson, a diabetic ex-soldier, had served in Northern
Ireland at the height of the Troubles, but whom no tours
Of duty on fractious bullet-cracking Belfast streets
Could prepare for the front line of domestic cuts
Under Iain Duncan Smith’s punishing welfare regime;
So much for poppies and patriotism, for saying “We
Will remember them”, when this vindictive government
Is so quick to forget them; countless souls as Clapson:
No “scrounger”, he’d worked and paid his taxes for 29
Years –done Cameron’s “right thing”– and looked after
His sick mother, thus saving thousands for “the taxpayer”,
Then, on her entering a care home, he lost his carer
Status and was put on precarious benefits while
He looked for jobs, and took up unpaid work placements…
Clapson’s body was discovered in a sea of CVs and
Job applications, just £3.44 to his name, a tin of soup,
Half a dozen tea bags and an out-of-date can of sardines,
All that was left in his larder –during the post-mortem
The coroner noted no food in his stomach, no food in…
Nothing…“Something for nothing”, something for no tins,
But nothing in compensation for his petitioning sister,
No formal acknowledgement of ‘administrative manslaughter’,
Simply a paltry ‘apology’ as if issued from impartial mourners
Implicitly divorcing themselves from any culpability:
‘Please Omit Flowers’, Please Omit Powers, Please Omit Responsibility…

‘Sorry for your loss but no errors were made’
The loss is to all of us, to our collective soul,
Our sense of “good old English decency” –what values
Have they who throw away the lives of the victims
Of impoverishment and incapacity
For the sake of saving corpses’ pennies for the taxpayers?
We say not simply we will remember Clapson
And the tens of thousands of fiscal sacrifices
At the Satanic altar of Austerity –but we say,
All of us, afflicted by the aristocratic Chancellor
And Iain Duncan Smith’s administrative massacre
Of the claimants, brandishing our black triangles,
Giro stigmas, stars of David, with rustling wings
Of ominous brown paper envelopes, in the name
Of the Spartacus Report: We are Clapson, We are
Clapson, We are Clapson, We are Clapson, We are…

‘Sorry for your loss but no errors were made’

Sorry for the errors but no loss was made

Here is a 2014 Guardian article which provides some background on David Clapson’s needless death: https://www.theguardian.com/commentisfree/2014/sep/09/david-clapson-benefit-sanctions-death-government-policies
Posted by BOLD MONKEY at 12:07 PM