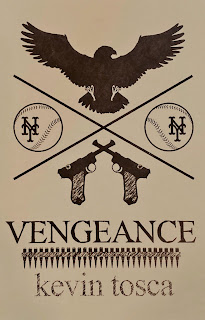 Vengeance is a 24-page, single-story chapbook by Kevin Tosca, published by Two Key Customs in May this year. The story begins in a small apartment, a quarter mile from the Holland Tunnel. Max and Carol, a married couple, wake to the threatening sound of a flock of black birds that have taken over the chestnut tree just outside their open window.

There is little summary or backstory. The characters of Max and Carol and the dynamics of their relationship are revealed gradually through dialogue. The plot too progresses very naturally through the couple’s conversations.

Max is clearly more distracted and threatened by the unexpected invasion of birds. He studies them through the open window as if he is watching the January 6thinsurrection on CNN. Carol is also preoccupied. It is the couples only day off, and Carol is fixated on enjoying the one day they have together. She wants to wake up slowly, make morning love, go shopping, get drinks and watch the Mets game. Her character is determined to meet these expectations and her long-term goals are made obvious as well. Carol wants a baby. Max, however, is not so sure they are ready to start a family.

“You can’t hear this? This accusation? This threat?” The birds’ “music” sounded like a sadistic mass of helter-skelter screeching. “Is this one of those female selectivity whatchamacallits you’re always lecturing me about?”

“Come on, don’t get bitchgrumpy. It’s our only day off. Seduce me, turn the radio on, you can even put on Morrison Hotel…”

The strength of the dialogue and the clear division of the piece into six scenes give this narrative an almost movie-like or play-like quality. It is a short story, but with the constant, humorous exchanges of Max and Carol it also reads like a theatrical battle of the sexes.

The following is from the fourth scene, after Carol returns from shopping and finds that two of the black birds are occupying the couple’s bathroom and there are crumbs of food all over the table and floor.

“You tried to feed them, didn’t you?”

“Have a wonderful life,” she said.

“Oh no,” Max said, blocking her path, “no way. We’re in this avian shitstorm together. You signed up, remember? Pledged allegiance to my flag.”

“Besides this is what it’s all about. This is one of the moments.”

“Did you start drinking without me?”

“Are you ever going to impregnate me?”

While the problems that the birds cause for the couple exist throughout the story, it is quickly understood that Tosca intended the dilemma to be symbolic. Vengeance is more about the relationship of Max and Carol, the urgency Carol feels to become pregnant, and the fear Max has trouble expressing about starting a family at this time. He isn’t ready, and now with the birds, it doesn’t feel safe.

There is an obvious subversion of traditional gender roles in Vengeance. Max is helpless when it comes to dealing with the dilemma of the birds, while Carol is hell bent on solving the problem and putting an end to Max’s nonsense. And if Max would have simply shut the window, as Carol asks him to at the start of the story, their only day off together could have been much less eventful, even pleasant.

It seems Max requires some distraction from domestic life, like the problem of the birds provides meaning to his existence. There is evidence of this in the third scene when Carol has gone shopping and left Max at home with the birds.

In Macy’s Carol received this text: We’ve got PROBLEMS!!!

That was it. All he sent, all he would send, having argued – for years – that such minimalist, muddy, mildly frightening texts added the spice and mystery necessary to conjure life’s magic.

For Max, the birds are “the vanguard of the animal revolution”and they have come for revenge. This seems highly fanciful, but it is coming from Max whose dealings with the birds can be seen as irrational, sparked by fear and fueled by anxiety and superstitions.

What the problem of the birds represents to Carol is entirely different, and there is a reason she is more prepared to deal with them. It is curious that Carol is the only woman in the story. There are only men in the barroom when they go to watch the Mets, and the Mets too are a team of men. Even the sex of the birds is only identified as male.

As for the vengeance the title refers to, you’ll have to read the book to find out. You can still buy a copy from Two Key Customs: https://www.etsy.com/listing/1231463083/vengeance-short-story-by-kevin-tosca 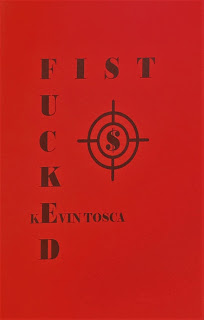 Kevin Tosca’s Fist Fucked is a single-story chapbook published by Between Shadows Press earlier this year (2022). The cover is simple, red with black print, displaying the title, author, and a U.S. Dollar sign caught in the crosshairs of a firearm scope.

The narrator of Fist Fucked is an unnamed member of the Brewtopia restaurant staff. His persona is deliberately insignificant, and the story begins by labeling his insignificance as well as the worthlessness of his fellow employees:

Tosca’s use of biting, bitter language and sarcasm fuel the energy in Fist Fucked, further exposing the lack of value and success experienced by the exhausted narrator and kitchen staff.

…when you look around at the hundred plus faces (servers, bussers, bartenders, hosts and hostesses included) belonging to your fellow employees and see an army of the bored, the stupid, the insane – a legion of twenty-first century slaves – most decked out in a similarly ragged and pathetic stage of inebriation.

The story peaks with a pointless, monthly staff meeting that occurs early Saturday morning and ends in violence. The real violence, however, is disclosed later by one of the younger staff members the narrator has come to trust.

This chapbook is a short, riveting read. A rant dedicated to the ghosts of kitchens past. Tosca’s first-person, stream-of-consciousness prose forces this piece down your gullet and hands you the bill.

Posted by BOLD MONKEY at 8:44 PM No comments: 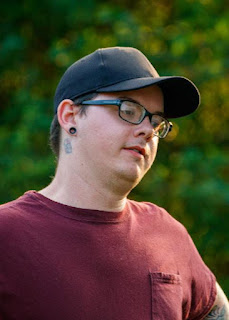 while shaving,
I catch a glimpse
of myself
in the bathroom mirror.
the black bags
under my eyes,
the stubble
on my chin,
the gray patch
in my hair,
the distant expression
on my face—
it all reminds me
too much
of my father,
so I look away
and go back
to rinsing off
the razor.
just my luck
a couple of
my kitchen appliances
stopped working
recently.
but I'm broke,
and I don't see that
changing
anytime soon.
so now what?
I don't know.
all I do know
is that the universe
has a funny way
of kicking me
when I'm already down.
Gabriel Bates is a poet living in Tiffin, Ohio. His work has appeared in several publications, online and in print. Keep up with him at gabrieljbates.blogspot.com.
Posted by BOLD MONKEY at 3:30 PM No comments: 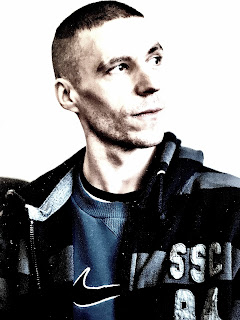 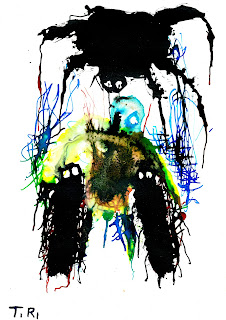 Caught in The Crack 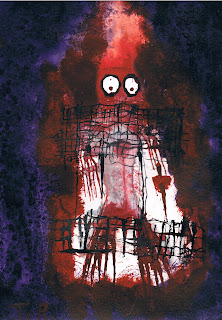 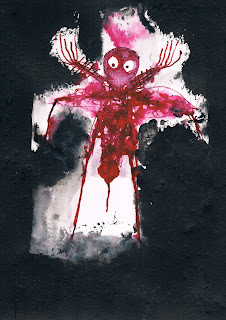 Trapped in the Tunnel 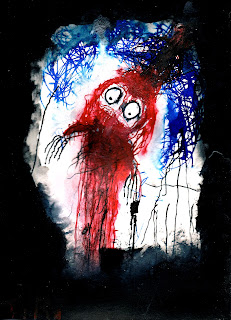 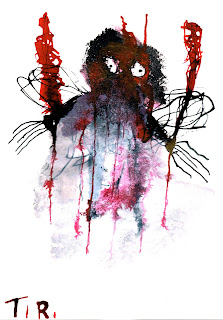 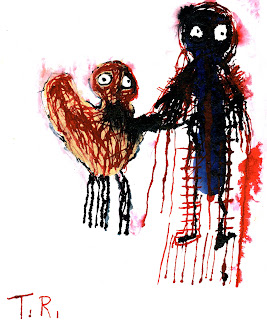 Thomas Riesner was born in Leipzig in 1971. He has been self-taught and intensively painting since 1990. In addition to acrylic and ink paintings, drypoint etching is one of his artistic means of expression. It literally gushes out of him spontaneously and abruptly. His expressive, intuitive painting style is reflected in his archaic-looking figures and pictorial elements. His pictures exude an atmosphere of originality and spontaneity, although most of the motifs depict torture, death, murder, rape, illness, end times and ritual cruelty.https://www.facebook.com/thomas.riesner.dehttp://www.thomasriesner1.wordpress.com
All painted on Paper with ink
Width 30cm
Length 41cm 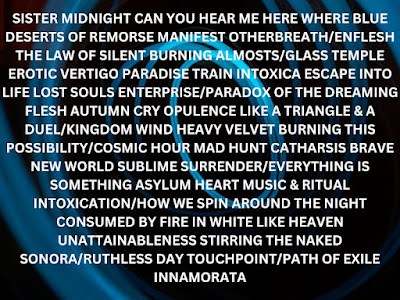 Posted by BOLD MONKEY at 6:07 PM No comments: 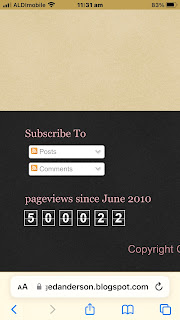 Just noticed the milestone at the bottom of the blog. Quite an achievement for this tiny blog. Been quiet lately but watch for upcoming posts on work by John Steinbeck, Kevin Tosca (with help from Jason Gerrish), Joseph Ridgwell and John Yamrus.