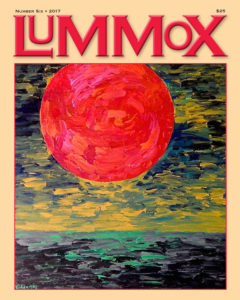 Overall, the anthology includes 169 contributors- some whom you might recognise as regular voices in the small press, such as, t. kilgore splake, Bill Gainer, John Sweet, Alan Caitlin & several others. But the vast bulk of writers will be largely unknown, typing away behind the scenes, yet who are intensely loyal supporters of Lummox Press.

The 8 x 10 inch book is a joy to flip through and read at your own pace. You can start anywhere and the gems of concentrated power tend to hit you best when you drop your guard and loosen your expectations.

The book is a good money-spinner for Lummox Press but Editor-in-Chief RD Armstrong has a low bullshit threshold and consistently maintains a high standard in the anthology.

Find my review of Ron Lucas's chapbook The Mother Goose Market on pages 188-191.

Find more details of the list of contributors and where to buy the book: https://www.lummoxpress.com/lc/lummox-6/

Find a generous sampling of the book here: https://issuu.com/poetraindog/docs/lummox6_sampler 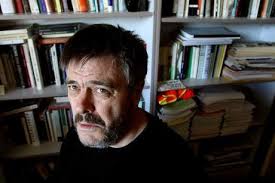 I recently posted on Bold Monkey parts 2 'Moriartys' and part 3 'Bluestocking' of Alan Wearne's epic verse novella IN OUR FOUR DOMINIONS. Told by an English journalist it charts his 60 year friendship with an Australian 'bluestocking' and her family, whom he meets on a tour of the British Empire's dominions in 1913-1914. The work also charts Anglo-Australian relations in the context of the Empire's decline.

A noted historian recently informed Wearne that there were actually five British dominions- Newfoundland was also one from 1911 to the mid 1930s when it reverted to a Crown Colony before it joined Canada in 1949.

Alan Wearne is the publisher of Grand Parade Poets: http://grandparadepoets.com


His latest volume as a poet These Things Are Real was published by Giramondo in 2017: http://giramondopublishing.com/product/these-things-are-real/

The concluding 6 parts of IN OUR FOUR DOMINIONS will be published in 2018. 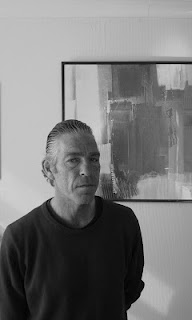 WATCH-OUT
We opened up all the windows
of the moving car, the fly was
ignoring this and flew around
the vehicle, irritating and
annoying:
‘Kill it!’ I said as my wife
swiped at it across the steering-
wheel: the fucker was quick:
I saw it coming towards me, I
didn’t want to murder it:
I karate chopped it with my
right hand, stunning the
thing and knocking it
towards an open window,
instantly, I followed up with
a lightning left back hand
karate strike that knocked
the fly clean out of the car:
it was awesome, it took me
by surprise and I knew this
was a performance never to
happen again, I felt like a
codeine-hash stoned
Bruce Lee;
‘Did you see that?’ I asked
my wife,
‘See what?’ she said,
‘What I did with that fly’ I
said:
‘Fuck the fly!’ she said,
sadly ignorant of my
breath-taking artistry.
THE RUBBER
‘This is awful: can you
help me? I don’t like
this: shit! this doesn’t
help the moment’ I said:
‘Calm down’ she said
‘Let me put the damn
thing on’
with such poise, timing,
touch and sensuality she
put the durex on my
excitement:
it felt odd and alien and
looked hideous:
‘Don’t lose it now’ she
said moving in close and
making the right moves:
and then afterwards,
‘Look at this fucking
thing!’ I said as I peeled
it from my pecker and
then holding the thing up
in the air like a sordid
trophy and then tossing
the thing towards the
trash can, where many
lives can often end up.

BUK AND I
Back in the early 1980’s
I was published in an english
language text book for
german students:
also featured in this
publication was a poem by
Charles Bukowski:
I was paid $15:00 for my
poem:
I don’t know how much
Bukowski was paid for his:
anyhow, for a teenage
poet being between the
pages with Buk
was payment enough.

SHE WAS TAME
She was a little older than
my mother and she had
red-fire hair and she’d
sunbathe in her back
garden in black or purple
bra and panties:
I’d looked at her with
13 year old eyes and
marvelled at her flesh
and shapely curves and
my imagination would
torment me wildly and a
little later I’d hear her
screaming appalling abuse
at her husband and
children, horrid and vile
words that stained the
air and destroyed any
sense of sensuality:
my very first encounter
with a woman with the
body of Aphrodite with
the tongue of the fallen
angel but she was tame
compared to some of the
ladies I was later to meet
THE CONFRONTATION
I was hopeless at the work
and fucked things up; the
foreman cursed me and I
came back with some young
thoughtless comment:
I was grabbed and pulled
away and told to walk
off the site, whilst I still
could and that’s what I
did and my thoughts
played heavy on backing-
down: it’s a bitter taste
but sometimes it just
makes sense to give it up
to avoid a useless
confrontation and defeat,
a beating, the pain and
humiliation: to walk away
and get ready and stronger
and prepared for the
next asshole.

Posted by BOLD MONKEY at 4:04 PM No comments:

New Release: Charles Bukowski Storm for the Living and the Dead: Uncollected and Unpublished Poems, Edited by Abel Debritto (Ecco, 2017) Hardcover only, 272 pages. 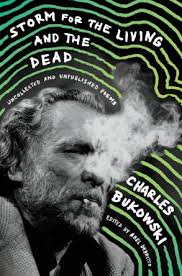 Unsurprisingly, Ecco has unearthed more errant stubble from Buk’s spent writing ashes. This most recent internment by scholar Abel Debritto, will be released on 7 November 2017 in a hardcover edition. If previous Ecco publications are any indication, this book will probably be a further watering down of Bukowski’s work and perhaps another posthumous kick into the balls of his reputation as an artist.

We need to consider, however that Bukowski wrote so much undocumented material during his lifetime. He posted hundreds, perhaps thousands of poems to small publishers without keeping carbon copies or accurate records of what went where or to whom. Several hundreds of poems/ stories were never returned or were eventually lost or stolen. Has Debritto sourced some more of these?

A source within Bukowski.com reckons Storm for the Living and the Dead consists of 72 previously unpublished and 26 previously uncollected.

Black Sparrow Press editor John Martin published most of Bukowski’s best work during his lifetime but continued to edit and churn out more of his stuff over a dozen or so volumes for Ecco after Buk’s death in 1994.

Find here a 2013 BM review of the Best & Worst of ECCO books: https://georgedanderson.blogspot.com.au/2013/09/the-best-and-worst-of-charles-bukowskis.html

Debritto has edited recent publications, such as, Bukowski on Writing (2015), Bukowski on Cats (2015) and Bukowski on Love (2017). On Writing gathers together some of Bukowski’s previously uncollected letters about writing whereas the other two books collect Buk’s previously published work on the themes of cats and love.

These are excellently researched books but not as interesting, nor in the same league as the City Lights publications, edited by David Stephen Calonne, such as, Portions From a Wine-Stained Notebook (2008), Absence of the Hero (2010), More Notes of a Dirty Old Man (2011) and The Bell Tolls For No One (2015). As reviewed in Bold Monkey, these books collect in a scholarly fashion the best of Bukowski’s previously uncollected poems, short stories and essays.

Debritto has also edited for Ecco Essential Bukowski Poetry (2016) which includes about 100 of Bukowski's 5000 or so poems and has published a critical study Charles Bukowski, King of the Underground: From Obscurity to Literary Icon (2013) which carefully documents Bukowski's rise to fame prior to quiting his post office job and writing his first novel Post Office.
As a Bukowski tragic, I’ll certainly be having a close look at what Debritto has now uncovered in a decade or more of research. Should be interesting how he structures and sources Buk’s previously uncollected or unpublished work.

On another note, I wish John Martin would release his full take on Bukowski’s publishing career & relationship within my lifetime.

A timeless selection of some of Charles Bukowski’s best unpublished and uncollected poems Charles Bukowski was a prolific writer who produced countless short stories, novels, and poems that have reached beyond their time and place to speak to generations of readers all over the world. Many of his poems remain little known, material that appeared in small magazines but was never collected, and a large number of them have yet to be published.

In Storm for the Living and the Dead, Abel Debritto has curated the very finest of this material—poems from obscure, hard-to-find magazines, as well as from libraries and private collections all over the country—most of which will be new to Bukowski’s readers and some of which has never been seen before. In doing so, Debritto has captured the essence of Bukowski’s inimitable poetic style—tough and hilarious but ringing with humanity. Storm for the Living and the Dead is a gift for any devotee of the Dirty Old Man of American letters.