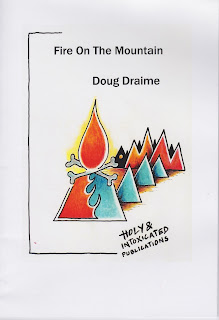 The latest Holy Intoxicated publication features the posthumous poetry of the late, great American poet Doug Draime (1943-2015). The poems were selected by his wife Carol and his son Aaron in this special limited chapbook edition. The book follows the publication of Farrago Soup (Pedestrian Press, 2016), a major retrospective of Doug's poetry.

In Fire On The Mountain you will find a wide mix of content, form and style amongst the 36 poems in the collection. The chapbook predominantly combines political poems with highly personal anecdotes. Also included is a reflection on Draime's writing life ("Tit ForTat, Or You'll Find Out Who Your Friends Are When You Need $5"), a song parody ("Poem, Love Me All The Time") an Animal Farm fragment ("One Connected And Disconnected"), a creation myth/allegorical poem ("Dragons On The Cliffs"), a philosophical exploration into the notion of reality ("Forming Words Inside And Outside Time", an alternative historical take on Christ's crucifixion ("This Side Of The Mystery/Game") and many other interesting experiments in language and subject matter.

In the political poems, such as, "Slaves Of The Harvest", "What It Is, Man!", "24 Hour Surrender", "For The Movie Star Who Wants To 'Help'", "Professing Love", "Poems For A Political Poet" and the rant "Offing Uncle Sam", Draime deeply expresses his rage, frustration and disgust at humankind's stupidity, insane greed, callousness and hypocrisy.

The powerful poem "Insanity of Peace" is perhaps the best of his political poems in the chapbook. Draine expresses a scathing appraisal of our ability to find a lasting peace. Our apathy, our misplaced faith in our leaders and the worship of "false prophets" greatly diminishes our attempts to achieve  peace.

Yet the poem's message can be read as positive and transformative overall. To move beyond our "continuing nightmare-movie", Draime implies that we need to dispel our illusions and to realise that peace is more than an abstract notion, and is possible, if we act:

We wait for peace in hunched anticipation,
believing it will somehow come from somewhere,
at some future time, someday, maybe a Monday.

We wait in pulsating anxiety, ready to lunge forward
to grab it hard like the proverbial brass ring on the
spinning merry-go-round we think is life.

We look to our “leaders” hoping beyond hope that
someone will come along who doesn’t lust to cut
our pathetic throats and sell our blood for the stagnant ethers.

We franticly thumb through thousands of books of false prophets.

We elect liars, butchers, and idiots who worship war, not peace.

We dream it will be brought about by some bloodied hero of our continuing nightmare-movie.

We think that peace will occur in some abstract manner outside ourselves, separate from our own thoughts.

We search for peace in our brutal illusions where peace can never be found.

(all poems have been published with the permission of the publisher)


In the chapbook, you will also discover several intimate, personal poems written about the poet's family, friends and casual sexual encounters. I was especially drawn to anecdotal poems which revealed his joy in experiencing everyday events- watching South Park with his step-grandsons and laughing their "asses off"("Possible Signs Of Life On Earth"), observing tongue-in-cheek, a robin crapping on his lawn ("A Bird's Gift") and quietly watching a woman place flowers around the house ("A Flower For You On Savage Creek Road").

Draime is clever and sensuous in describing intimate relationships. Memorable are the poems "Drinking Wine With A Beautiful, Raving Lunatic", "Dream On Christmas Day", "Memory Of A Place I Have Never Been With A Woman Who I Never Knew", "Sentimental" and the micro poem "Memory of Love Dying".


Sex With The Hippie Palm Reader

Now, looking down at the palms of my hands,
I remember one day in the early 70’s
when I was full of mescaline and
marijuana, a beautiful young woman
read my palm. She was high too; and I
remember the lovely curve of her
inner thigh as her flowered dress rode up
when she moved forward on
the chair, holding my right hand and she
moved closer and her breath was slightly
garlic, but mainly Scope mouthwash and was hot
on my palm. She told me many things, pointing out
the lines on my palms which indicated them.
I disregarded most of the predictions and openly
laughed at one.: she said I would always be
dependent on other people for money, that I would never
have any of my own. At the time I had a good job running
a bookstore, and pocket change from writing.
But now, I think of the hard times over the last several years
in Oregon. and I can’t help but think of Dante, Chatterton,
Poe, Hamsum, Miller, and St. Peter, begging for a crumb of bread,
unable or unwilling to secure a livelihood through their own
efforts, because of their passion, because of their
obsession, because of their worldly perceived
unworthiness, because of the their undeniable destiny.
I thought of these men and I thought of
my former homelessness, remembering her grim forecast,
as I studied the lines of my hand,
as I remembered her dress ridding up on her further
and my hand on her moist warm upper
thigh, and I remember her closing her eyes and shuttering.
And now, nearly 25 years later, yes, there has been
desperate poverty, even homelessness,
but I know that the
big picture on that day was sex, dizzy and frantic,
on the floor between our chairs, not any lines on my hand or
knots on my head. There was just her lovely face
and supple body, with the deep, wet lines of
her vagina, spelling out our destiny for an hour
and this memory.

The cover is designed by the Swedish artist Janne Karlsson, a long-time collaborator of John D. Robinson of Holy & Intoxicated Publications and Wolfgang Carstens of Epic Rites Press. The front cover is minimalist in an abstract, symbolic way. In the foreground a candle burns brightly crowned by crossbones. In the distance there is a black mountain in which a small window appears to observe the candle.

Towards the end of his life, Doug Draime struggled with lung cancer and a few of the poems allude to death, particularly in the final poem in the collection "This Side Of The Mystery/Game" begins:

Death is the bottomless pit, a ravenous
beast that
gets us all in the
end.

Yet Doug Draime lives on through his poetry and in the rare didactic poem "Existence" he points to the reader how we should lead our lives:

The lesson
of this
is to
prepare
yourself
for the
light
to wake
from the
nightmare.

The lesson
of this is to
give up
the bloodied
ghosts of
your
own
creations.

The lesson
of this
is to
let the
demons go
watch them
fade
back
into
nothingness
like
phantoms.

The lesson
of this
is to
bust out of
your
shackles
into bright
limitless
creation where
death
is no more
because
it
never
was.

The lesson
of this
is that
love is
the only
thing that
perpetuates
the breath
of spirit,
love
being the
only
vehicle
of your
liberation.

In Fire On The Mountain, Draime Draime shows that he is a witty, playful, deeply human poet. His work is original, highly varied and he seamlessly weaves between the mundane and the big issues: love, politics, time, poetry, death.


Check out Doug Draime's official website where you find a wealth of information about his writings and where you can buy Fire On The Mountain & some of his earlier work: https://www.dougdraime.com