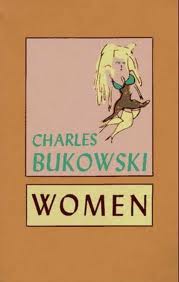 This is Bukowski’s third novel and explicitly recounts Henry Chinaski’s life as a poet, a drunkard and lover. It is written in Bukowski’s characteristic terse, matter-of-fact style and is considered largely autobiographical despite the blurb at the front of the book which cautions that 'this novel is a work of fiction and no character is intended to portray any person or combination of persons living or dead.’

Chinaski is over fifty and has published about twenty-five books and makes enough money to pay his rent in East Hollywood. He eats well and can afford good wine but is still struggling for wider literary fame. He flies around the continent giving usually ineffective, drunken readings of his poetry and in between he hops into bed with his young female readers.

If you are familiar with Bukowski’s writing, you will enjoy this book. The numerous interchangeable groupies Chinaski befriends becomes rather repetitive but never predictable. Any idiot can get drunk, fuck & write free verse but it takes a special talent like Bukowski to write about it credibly and with great humour & spirit. Bukowski is a disgraceful role model for any aspiring writer but he writes with extraordinary candor and conviction.

The incidents which Chinaski recounts are fascinating in themselves, but what lifts his words above the page, what makes this book great- is how he is able to distil in a few sentences, in between his alcoholic beverages, wanks and bonks his unique take on life.

Here is an overview of some of Chinaski’s best lines in Women. I’ll call this section ’The Beast with Three Legs’ after Chinask’s fictitious book of short stories of the same name he imagines in this novel. It is an apt metaphor to describe the animal in Bukowski.

WARNING: Some of the following quotes include adult references. Recommended for 18 years + only.

‘The Beast With Three Legs’

On Women
Chinaski has undertaken a lot of 'research' for this book. He originally craved whores but since he has gained attention for his writing, he has developed a soft spot for more sensitive and caring woman. Against his will, he is ruled by his 'third leg':

‘I had to taste women in order to really know them, to get inside them. I could invent men in my mind because I was one, but women, for me, were almost impossible to fictionalize without first knowing them.’

‘Basically I craved prostitutes, base women, because they were deadly and hard and made no personal demands. Yet at the same time I yearned for a gentle, good woman, despite the overwhelming price.’

On Relationships
Chinaski is not interested in long-term relationships which involve personal commitment and responsibility. He views love cynically and sees relationships largely in terms of lust:

‘Human relationships were strange. I mean, you were with one person a while, eating and sleeping and living with them, loving them, talking to them, going places together, and then it stopped.’

‘Only the first two weeks had any zing, then the participants lost their interest…the most one could hope for in a human relationship, I decided, was one year.’

On Love
‘I accepted them for what they were, and love came hard and very seldom. When it did it was usually for the wrong reasons…Then usually there was trouble.’

‘It’s like trying to carry a full garbage can on your back over a rushing river of piss.’

On Sex
Bukowski is highly inventive and varied in his many descriptions of fucking. He often describes intercourse as ‘murder’ or ‘murdering’ his partner. It is seen as a violent, animal activity as sometimes attempting to break a women in two:

‘The thought of sex as something forbidden excited me beyond reason. It was like one animal knifing another into submission. When I came I felt it was in the face of everything decent, white sperm dripping down over the heads and souls of my dead parents. If I had been born a woman I would certainly have been a prostitute.’

‘Then I gave up trying to please her and simply fucked her, ripping viciously. It was like murder. I didn’t care: my cock had gone crazy. All that hair, her young and beautiful face. It was like raping the Virgin Mary.’

‘I gave her a long slamming gallop full of unexpected variables and inventiveness before I finally shot into her.’

On Drinking
It’s amazing Bukowski lived to 72 considering the excessive drinking he did throughout his life.
Be interesting to carefully examine his original drafts and how Martin edited them:

‘I hated it when the beer wouldn’t stay down.’

‘I’m just an alcoholic who became a writer so that I would be able to stay in bed until noon.’

On Old Age
Bukowski was a dirty old man until the end:

‘I was old and I was ugly. Maybe that’s why it felt so good to stick it into young girls. I was King Kong and they were lithe and tender. Was I trying to screw my way past death?

On Life
‘People just blindly grabbed at whatever there was: communism, health foods, zen, surfing…backpacking, yoga, copulating, gambling, drinking…People had to find things to do while waiting to die.’

Like Bukowski, he paints himself as a loner who has no god or politics. After mauling dozens of mostly young, naïve women Chinaski surprisingly sees himself for what he is: a ‘selfish, spoilt fucker’ and cries pathetically to himself near the end of the novel. This sudden change is not adequately prepared for and does not ring true:

‘I was naturally a loner, content just to live with a woman, eat with her, sleep with her, walk down the street with her. I didn’t want conversations, or to go anywhere except the racetrack or the boxing matches.’

‘I was drawn to all the wrong things: I liked to drink, I was lazy, I didn’t have a god, politics, ideas, ideals. I was settled into nothingness, a kind of non-being, and I accepted it.’

‘I ate meat. I had no god. I liked to fuck. Nature didn’t interest me. I never voted. I liked wars. Outer space bored me. Baseball bored me. History bored me. Zoos bored me.’

‘I was simply letting things happen without thinking about them. I wasn’t considering anything but my own selfish, cheap pleasure. I was like a spoiled high school kid. I was worse than any whore; a whore took your money and nothing more. I tinkered with lives and souls as if they were my playthings. How could I call myself a man? How could I write poems? What did I consist of? I was a bush-league de Sade, without the intellect.’

‘I had imagined myself special because I had come out of the factories at the age of 50 and become a poet. Hot shit. So I pissed on everybody just like those bosses and managers had pissed on me when I was helpless. It came to the same thing. I was a drunken spoiled rotten fucker with a very minor fame.’

On Writing
Chinaski portrays himself as someone who is compelled to write. He hates other writers and attends book readings only because they help pay the bills:

‘There’s no way I can stop writing, it’s a form of insanity.’

“Art takes discipline. Any asshole can chase a shirt.’

‘I write fiction. Fiction is an improvement on life.’

On Writers
‘The worst thing for a writer to know is another writer, and worst than that, to know a number of other writers.’

‘You could be sure that the worst writers had the most confidence, the least self-doubt. Anyway, writers were to be avoided.’

On Poetry Readings
'Readings diminished me. They were soul-sucks…Readings got you a piece of ass sometimes.’

‘Drunk as they were they could immediately detect any false gesture, any false word. You could never underestimate an audience.’

Bukowski makes writing look easy but it is obviously a skill which he has honed from writing thousands of short stories & poems. This book is long but it doesn't really have the feel of a novel. It is rather a series of short anecdotes loosely tied by the woman Chinaski is 'researching'. Chinaski never forces himself on any woman but still comes across as a brutal opportunist. He really doesn't have the empathy for the working poor he strongly expressed in Factotum and only when it is far too late does he show any regret or compassion for his actions.

Wild & Wooley had a license from Black Sparrow Press to publish Women in Australia in 1979. Only 750 copies were printed. A book in good condition will now fetch $150 and upwards.