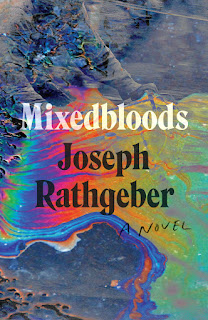 Chapter 4
By the time Exley arrived in Cragmere, the skies were darkish—the avenues illumined only by the flowers of Callery pear trees, smelling not so much semen-sweet this late in June as poison. His car stalled out at the LED-fringed stop sign, flashing red. As he pumped the gas pedal, turning over the ignition, he stared out the window at the cobblestoned curbs.
The address of the party was on a tear of paper on the dash—83 Masonicus Roadflickered against the odometer. Exley was halting, iffy as he gathered a backpack of over-the-counter medicines out of the trunk. He was only welcome at the party because of the tangible items he could provide to his peers.
The paver walkway leading to the side gate was trimmed with artificial flowers—asters and freesias. Pesticide flags poked up from the lawn. A Slomin’s Shield placard was conspicuously positioned below a bay window. The gate opened onto a vast yard.
Brash music blared from a small stereo on the deck rail. Nobody was letting a song finish. Kids were just pecs and breasts and necks and arms and heads and mist-damp hair in the jacuzzi—the rest of their bodies submerged in the froth and the foam of the jets.
“DeGroat!” one of them belched. Exley wasn’t sure who it was.
There was an inground pool—heated and recently shocked. The smell of chlorine even overpowered the rank keg spills and skunk stink of weedsmoke. The deep end of the pool boasted a grotto with a stone waterfall. And there was a group huddled around a diving board listening to some whiteboys freestyle—all doing arrhythmic head nods. A girl Exley recognized from study hall, clanking her rainbow bangles, asked if he’d paid for a cup.
Exley scoped Womack further off by a manmade koi pond. He and others were feeding handfuls of Chex to the fish. Womack greeted Exley with a gut punch.
“Where’s your squaw at?”
“Who you talking about?” Exley asked.
“Your squaw—Sue.”
“Fuck you, yo.”
They walked along the privet hedges at the far end of the property. Several dudes were yellowing the fringes of the lawn with piss. They stopped next to a storage shed and Exley unzipped his backpack.
Womack emptied a bottle of whiskey into an antique flagon. “It’s the only thing Aubrey said she could find in the kitchen,” he explained. They squeezed raspberry Kool-Aid through the strawholes of juiceboxes into the mix. And then the dextro, which is dextromethorphan, which is over-the-counter Dimetapp DM, of which Exley provided five bottles. It made for a treacly potion.
No fewer than four meatheads were playing hard-to-the-body beneath a trellised arch with plastic ivy and a hose mister woven in and through the latticework—another attempt to outglitter the neighbors, Ex figured. The louts ordered up two rounds of the sticky elixir. Womack poured into their Solos; Exley collected the profits.
They entered the sunroom through a screen door that thwacked shut after them. Exley was unhappy to see Adams in there, sunk into a well-pillowed patio sofa with his feet on a glass table.
“DeGroat,” Adams started, “how’s the meniscus?”
Nelson Adams played JV with Exley, but—unlike Exley—sat varsity. They’d played rec together in middle school and even went further back to elementary. Adams used to inside-out his eyelids, and Ex would shudder at the pinkness. Exley hated much of what Adams did or said.
“Healing, but still hurting like a motherfucker,” Exley answered.
“This guy,” Adams said, smacking Hitch’s chest, “shreds his knee to shit the last game of the season—the last two minutes!”
Hitch toadied to Adams. He paid for his dextro and removed the cancer paper from his Black & Mild.
“Good looks on the jungle juice, DeGroat.”
Adams tried to palm the three-legged floor globe next to him and—thanks to the raised-relief landmasses—did. He made a show of it. Hitch worked on a blunt with the slow delicacy of an entomologist dissecting a chrysalis with a scalpel.
“Hitch, what the fuck—,” Adams said, “let DeGroat, my Injun, roll that shit and light it up. Your people make them good fires, am I right?”
Aubrey, whose house it was, staggered through the screen door, freaking.
“No smoking in the solarium!” she clamored. “What the fuck is wrong with you people?” She ran into the house.
“Fuck’s a solarium?” Womack said.

They reconvened by the storage shed. Kids were stacked on shoulders, splashing, fully-clothed in the pool. The reek of chlorine was still strong. Someone had killed a koi. Exley flame-sealed the blunt with a white lighter. “Check that!” Adams snatched the lighter and tossed it into the pool.
“What gives, Nelson?”
“Bad luck, DeGroat—white lighter. You should know that shit.”
Exley stared at Adams as though he could see the pink under his eyelids.
The cipher proceeded but with Adams speaking ceaselessly on all matters of bullshit. About assist-to-turnover ratios. About copping feels. About—as Adams put it—Exley’s people in the hills. Ex tried to toke and to ignore.
“What you pulling on, DeGroat? That a calumet?” Adams doubled over, stomped his feet. Exley passed the blunt to Womack.
“Your shit ain’t even funny, dude.”
“Relax, DeGroat,” Adams coughed and smiled through it. “Don’t get all big brother on me.” Adams smacked Hitch in the chest again. “You know about DeGroat’s brother back in the day, right? Big goth-looking motherfucker. Dude went off the fucking reservation at school. Some dude called DeGroat’s brother a fucking ogre or Grendel or Swamp Thing or some shit like that, and this guy pulls the fucking porcelain water fountain from the wall and smashes it over dude’s head, nearly kills him. Fucking brains leaking out. DeGroat’s brother got expelled a week before graduation.”
Exley’s eyes burned like he’d been swimming underwater.
“Retard strength, yo.”
The crowd gathered just as fast as Exley stepped to Adams. Womack was as quick to split them apart, stretching Exley’s t-shirt collar in the process. A siren bleeped and the side of the house lit up red.
Aubrey came running out of the solarium, bawling, “Hitch!Can you come?”
Hitch’s father was Mahwah police captain; his uncle was a municipal judge. He headed to the side gate with the blunt still in his hand.
Haggard and reasonably high, Exley parted the privet hedges, hopped a composite split-rail, and circled back toward his car. Sue was just arriving, still in her CVS polo, albeit untucked. She waved stiffly with her sprained wrist.
“Party over already, Ex?”
“Maybe not,” Exley pointed to the cop cars parked pell-mell a few houses down. “Hitch is talking to them. But I gotta be out.”
He reversed down Masonicus Road until he hit the intersection he’d stalled at earlier. Then he headed for home.

Bio: Joseph Rathgeber is an author, poet, high school English teacher, and adjunct professor from New Jersey. His story collection is The Abridged Autobiography of Yousef R. and Other Stories (ELJ Publications, 2014). His work of hybrid poetry is MJ (Another New Calligraphy, 2015). His debut novel is Mixedbloods (Fomite, 2019). He is the recipient of a 2014 New Jersey State Council on the Arts Fellowship (Poetry) and a 2016 National Endowment for the Arts Creative Writing Fellowship (Prose).

Cops don’t respond to calls on Stag Hill. Neither does the fire department. The Ramapough Lenape, a destabilized people—origins uncertain, debated and mythologized—are struggling to survive in the face of an ecological devastation visited upon them by the neighboring Ford plant, which has dumped paint sludge in the abandoned mines for decades. The EPA hasn’t lived up to its promise of a cleanup, and the woods in which they hunt and play are toxic.

Exley DeGroat is an apathetic Ramapough teenager trying to define himself and his people, wrestling with the revenants of his past and the horrors of his present. Mixedbloodsis a story of identity, of a cultural history under attack, and of destructive—often violent—behavior. It documents a class struggle between the rich and poor, but also between the organic and the inorganic, and thus between the forces of life and the forces of death.

Find out more about the Joe’s novel here: https://www.fomitepress.com/mixedbloods.html

Check him out on Tumblr: https://josephrathgeber.tumblr.com