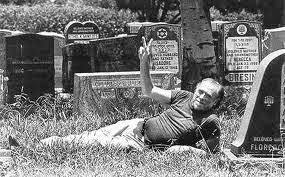 It is often difficult to distinguish one Bukowski posthumous book from another largely because he had a tendency, as you know, to write about the same topics over many decades: growing up in the House of Horrors, his life on the edge as a starving artist, the drunken bum on skid row, betting at the race track, the whores/ the lovers. His long-term editor John Martin also doesn't give much away and is adverse to explaining what he has done as an editor. Consequently, it is difficult to work out the specific context in which Bukowski's poems were written, although some are more obvious than others.

I have read all of Bukowski's posthumous books over the last two years and the list which follows is at best a gut reaction to each work as a whole. I am also guided by my notes on the number of poems I considered worth re-reading. I have only included stand alone poetry books published after Bukowski’s death and therefore have excluded his diaries, letters, travelogues, and The Pleasures of the Damned: Poems 1951-1993 which includes some of his early work.

I’m probably one of the few hundreds of people in the world to survive reading through all of Bukowski’s posthumous poetry. Some of the stuff is good but the gems are often buried amongst mounds of shit. As Bukowski himself writes in Reach for the Sun Selected Letters 1978-1994 Vol 3, “Writing is like digging yourself out a pile of crap but then the pile covers you again and you have to write your way out of it again. Shoveling shit with words, huh?”

In a letter to Stephen Kessler in December 1984 Charles Bukowski writes, “John Martin has quite a buildup of unpublished material from a couple of decades. There’s a very good chance, if the world is still here, that John Martin can publish a new Bukowski book each year for a good 5 or 6 or 7 years, maybe longer depending upon how long I continue to drink this good wine. Of course, that will all be beyond me: I’ll be done in Hades playing the Horses.”

Although Buk published a couple more significant books of poems after this date, including You Get So Alone at Times That It Just Makes Sense (1986) and The Last Night of the Earth Poems (1992), to my knowledge, there have been 11 collections of Bukowski poetry published since his death in 1994. Here is my brief summary of this work: 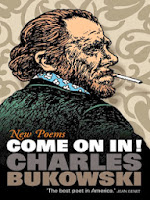 This is the best book of poetry published after Bukowski’s death. Particularly striking are the poems which deal with his gradual descent into death.

The Flash of Lightning Behind the Mountain (2004)

This is a solid collection with plenty of strong poems, such as 'be cool, fool', 'card girls', 'Crucifixion', 'the fix is in', 'a visitor complains', 'the difficulty of breathing', 'cold summer', 'nothing here' and many more.

A very large book bursting with dozens of excellent poems. 'The angel who pushed his wheelchair', 'the cigarette of the sun', 'the ordinary cafe of the world', 'the people' and 'wasted' would make a perfect start to your day.

This is a comparatively slim volume but has a high proportion of top work.

Start with 'it's a drag just breathing', 'New York, New York', 'living in a great big way', 'poem for nobody' and 'something's knocking at my door'.

These poems were written between 1970-1990 and are part of Bukowski's archive he left to be published after his death. Some of the poems were previously published but no specific acknowledgement is made. No mention anywhere is made as to edited this collection. Part 2 'Flight Time To Nowhere' is impressive but the other parts are comparatively ordinary.

This is the smallest collection of poetry published since Bukowski's death and may be his last through ECCO. It is a tight and worthwhile collection.

Although this book predominately consists of poetry it also includes short stories such as 'The Unaccommodating Universe', 'an empire of coins' and 'Ransom' which really make this book. Comparatively, the poetry is not as solid.

Editor John Martin is seriously starting to scrap the bottom of the barrel of Bukowski's writing with this book.

Find my short review of the book here:
http://georgedanderson.blogspot.com.au/2011/12/charles-bukowski-new-poems-people-look.html

the night torn with mad footsteps (2001)

Sure there are maybe 20 poems in here worth saving but overall a very disappointing book.

Sifting Through The Madness For the Word, The Line, The Way (2003)

Great title but a shitty book. This is officially the worst book of Bukowski poetry published after his death.

Anyways, this is my list. As I said it is largely my gut reaction to the books.
Posted by BOLD MONKEY at 10:53 PM