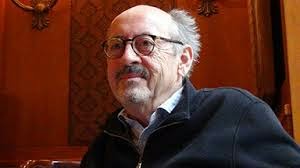 I am a casual observer of Billy Collins’ poetry and recently read three of his books: Horoscopes for the Dead (2011), The Trouble With Poetry (2005) and Nine Horses (2002). I was curious as to why Collins, a former U.S. Poet Laureate, was so widely read and lauded. I was interested in particular with his exploration of death which has been increasingly prevalent in his poetry. I quickly learnt that although Collins writes frequently about death, his views are often neatly packaged, irreverent and trite.

His poem ‘Velocity’ got me thinking about Collins. The speaker is in a club car with his notebook and realises that “there was nothing to write about/ except life and death.” He draws “over and over again/ the face of a motorcyclist in profile-

leaning forward, helmetless,
his long thin hair trailing behind him in the wind. 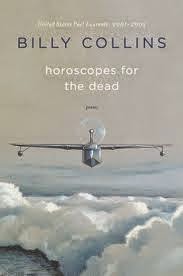 TALKING TO THE DEAD

In Billy Collins’ world people don’t seem, to die but remain alive in his imagination and retain their basic personalities and personal histories. In ‘Grave’ the speaker, presumably Collins, visits his parent’s dual plot & pressing his ear to the soft grass he asks them what they think of his new glasses, “They make you look very scholarly,/ I hear my mother say.” Similarly, in ‘No Time’ Collins sounds his horn as he speeds past his parent’s cemetery. He imagines quaintly as if they are still alive, “Then, all day long, I think of him rising up/ to give me that look/ of knowing disapproval/ While my mother calmly tells him to lie back down.” In ‘Cemetery Ride’ the speaker pedals through a cemetery and cheerfully greets many of the dead & hopes for the impossible, “I wish I could take you all for a ride/ in my wire basket on this glorious April day.”

This tendency to communicate with the dead in a false & deluded way is furthered in ‘Thank-You Notes’ in which the speaker personally thanks “everyone who happened to die/ on the same day I was born”:

Thank you for stepping aside to make room for me,
for giving up your seat,
getting out of the way, to be blunt

More importantly, in the wry second person poem, ‘Horoscopes for the Dead’ the speaker ironically juxtaposes a reading of the daily horoscope with the extinguished dreams of the dead:

But you will be relieved to learn
that you no longer need to reflect carefully before acting,
nor do you have to think more of others,
and never again will creative work take a back seat
to a business responsibilities that you never really had 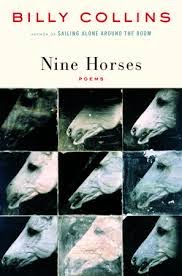 Collins tries to personalise his exploration of death by imagining his own individual demise. His treatment is characteristically thin. In ‘Rooms’ after three days of “steady, inconsolable rain, ” the speaker walks through his house and provides the reader with a running commentary as to which room would be best for him to die in. The language is detached, detective-like & cheeky in tone:

The study is an obvious choice
with its thick carpet and soothing paint,
its overstuffed chair preferable
to a doll-like tumble down the basement stairs.

And the kitchen has a certain appeal-
it seems he was boiling water for tea,
the inspector will offer, holding up the melted kettle.

Then there is the dining room,
just the place to end up facedown
at one end of its long table in a half-written letter

Death is viewed as a game, as a series of rational choices which we can make at our leisure.

In ‘Breathless’ the speaker contemplates the sleeping positions of people & then he quickly thinks about the dead and how they will permanently come to rest. In another transition, the poet recommends how he wishes to be buried:
After a lifetime of watchfulness
and nervous vigilance,
I will be more than ready for sleep

so never mind the dark suit,
the ridiculous tie
and the pale limp hands crossed on the chest.

Lower me down in my slumber,
tucked into myself
like the oldest fetus on earth.

In one of Collins’ more witty poems ‘Statues in the Park’, the speaker examines an equestrian statue in a public square and he imagines what his own memorial would look like. The poem ends in a light, playfully humorous note: “And there was I…/ down on my knees, eyes lifted,/ praying to the passing clouds/ forever begging for just one more day.”

In each of these poems, Collins is keen to imagine the viewing his dead body. He is confident and self-assured he will get the sort of death he desires. No pissed pants, bone-numbing terror or unrelenting shards of pain is in his cards.

This obsession with death is furthered in the poem ‘Delivery’ in which he finds himself “wishing that the news” of his death is delivered in the form of a child’s drawing, complete with “puffs of white smoke/ issuing from the tailpipe, drawn like flowers.” 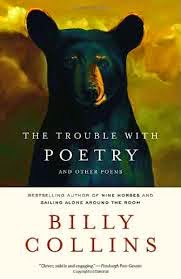 For the most part, Death is seen as an intellectual exercise by Billy Collins. He uses the concept to construct poems which dabble with the idea from a variety of perspectives. In ‘Simple Arithmetic’ the speaker mentions he daily spends time on a small dock gazing pensively into the lake. Today, he contemplates the whole picture before him and subtracts five hundred years: “all the houses are gone, the boats. ” Also gone is “the plane crossing the sky,” the swimming pools, & turning closer home, he meta-poetically concludes, “and gone are my notebook and my pencil/ and there I go too,/ erased by my own erasure and blown like shavings off the page.” In ‘Death in New Orleans, a Romance’ the speaker writes another clever meta-poem in a café over a glass of wine about his mind being “like a wire birdcage” and how “on the day I die…/ the wire door will spring open/ and the bird takes flight,/ looping over the ironwork of the city,/ the water tanks and windowed buildings,/ then up into the clouds and stars.” In ‘Roses’ the speaker is once again writing into his notebook, this time about how in midsummer the petals of the flowers grow “cantankerous”, turn brown on the edges and fall to the ground. He personifies their woeful public death: “then how terrible the expressions on their faces/ a kind of was it all really worth it?”

In these poems death is not viewed as an entity in itself but rather as a vehicle to construct clichéd symbolic images: erasure, flight and despoiled nature. The poems leave a remote feeling in the reader, that Collins is smug & is deliberately avoiding the stark, shrieking ugliness that death brings with it.

Collins is probably more effective at writing about the subtle tweaks which signal to us on a deeper level that all life will one day end. Yet some of us never get it. In ‘The Order of the Day’ the speaker is with his family & as “the sun shot through the branches” after a week of rain, he sees Philip Larkin-like things whole & true: ‘Everything seemed especially vivid/ because I knew we were all going to die,/ first the cat, then you, then me.”

In ‘House’ he lies down in the bedroom of a house built in 1862 and empathises with “those who have slept here before” including “the dead farmer and his dead wife” who he never knew but now provide him with company. In one of Collins’ better poems, ‘The Peasants’ Revolt’, the speaker says in a refrain that “soon enough it will all be over”:

just an expanse of white ink
or a dark tunnel coiling away and down.
No sunflowers, no notebook,
no sand-colored denim jacket
and a piece of straw in the teeth,

just a hole inside a larger hole
and the starless maw of space.

In this bleak recognition of the end of his consciousness and in everything that has helped shape his identity as a public poet, the speaker reaches a significant transition & reaffirms his commitment to the living when tells his lover that “we are still here.” He coaxes her to remove her top & lie with him:

So undo the buttons on your white blouse
and toss it over a chair back.
Let us lie down side by side
On these crisp sheets like two effigies on a tomb.

Similarly, in the second person poem ‘Bereft’ the dead are seen as the “lucky” because of “their freedom from” human commitments & responsibilities but also there is a sense of loss at the end of sensation:

No more bee chasing you around the garden
no more you chasing your hat around a corner,
no bright moon on the glimmering water,
no cool breast felt beneath an open robe.

In ‘Memento Mori’ the speaker sees himself as a mayfly, as “a soap bubble floating over the children’s party.” Standing “under the bones of a dinosaur” or in a church, he is constantly reminded of his mortality and realises that no one “has figured out a way to avoid dying.”

These poems sense effectively ephemeral nature of our lives and the need for love and acceptance.

As you can see from this brief analysis, Billy Collins writes extensively about death. The poems are clever, but usually have a feel-good, gimmicky quality about them. You see flashes of the ephemeral quality of life, but characteristically, Collins shields & humours his readers from darker visions. The closest he comes is in ‘Reaper’ when in driving to lunch, he spots a man on the side of the road who returns his gaze & there is something about his face which gives him a “jolt of fear.” But he quickly returns us to our comfortable road.