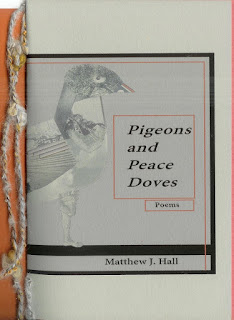 Matthew J. Hall resides in Bristol, England and Pigeons and Peace Doves is his first collection of poetry. The chapbook won the 2015 Blood Pudding Press Poetry Chapbook Contest and was first published in June 2015. The chap consists of 13 highly accessible & diverse free verse poems. The book is beautifully hand-crafted & is bound by a stem of fine multi-coloured rolled wool. The pages are ultra smooth and when you hold them to the light they sparkle like scattered gold stars.

Recently asked about the symbolic import of the title ‘Pigeons & Peace Doves’, Hall mentioned that pigeons “are representative of a kind of urban sadness which I guess is a theme for me overall. The Peace Dove represents hope- which hopefully- does come through the poems.”

This ambivalence between sadness and hope is a key feature of Hall’s fledgling writing. Descriptions of the vibrancy of life in its full bloom are sometimes tempered with thoughts of despair, decay and death.

In the opening poem which is addressed to his lover ‘She Sedates the Rhino’, the dark ‘rhino’ thoughts of the persona are subdued by “the girl of grace” and he is given a reason to continue on for another day:

She Sedates the Rhino

you were dropping them on my bed
as a gesture of love
and the maggots of my recurring nightmare
turned tail, all in a slither of retreat

(reprinted with the permission of the author)

The best poems in the collection (like the one above) are confessional in style. They are highly reflective with a melancholic edge. In this sampling of Hall’s poems, he explores, for example, the unconquerable distance between people, the inability to express in words how one truly feels (‘Harbouring Thoughts of Escape’), how love, however pure, can never be enough (‘The Full Weight of My head’) and how hope can survive “unmolested by yesterday’s sorrow” (‘There is Still a Little Grace in Me’). These are mature, complex ideas & emotions adeptly handled by Hall in his poetry.

In the collection, you will also discover some more playful poems, such as ‘Dear Confidence’ and ‘Do Not Consider the Poet’ which satirise the self-centred traits of tricksters & drunken, insecure poets. There is also the micro poem ‘Childish Advice’ which offers the pithy but sensible aphorism: try/ not/ to /hurt. 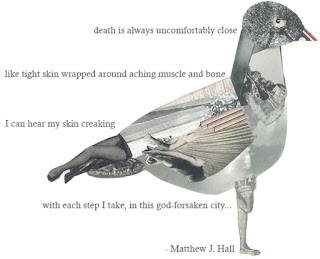 (reprinted with permission of the artist)

The cover of the chapbook was designed by Marcy Erb who presently lives in Boston. Her bird collage was inspired by many of the poems in Hall’s collection but the poem ‘This City is sad and Angry’ became its foundation. Find more information here: http://illustratedpoetry.com/2015/06/09/city-poem-hall/

From the chapbook an illustrated poem ‘This City is Sad and Angry’:
www.screamingwithbrevity.com/2015-bpp-poetry-chapbook-winner-pigeons-and-peace-doves-by-matthew-j-hall/
Posted by BOLD MONKEY at 10:25 PM