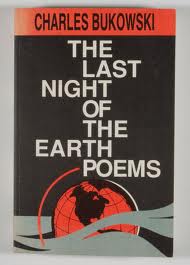 running out of days

as the banister glints
in the early morning sun.

there will be no rest
even in our dreams

now, all there is to do is
reset
broken moments.

‘blasted apart with the first breath’

This is the last book of poetry that Bukowski published during his lifetime. It is a substantial collection which strengthens our understanding of the Bukowski legend. You get the impression that he is setting the record of his life straight as he senses his ‘luck is running thin.’ The poems are characteristically acutely observational and recall incidents from his lifetime of drinking, writing and womanizing. These poems are highly entertaining, humorous and occasionally profound. The book is certainly more consistent and stronger than any of the many posthumous collections ECCO has churned out since.

Bukowski’s voice is highly personable and often directly addressed  at the reader. I can imagine him propped up in bed writing poems in his yellow journal or cursing the computer after he accidently deletes one as in ‘Hemingway never did this’. Many of the poems revisit Bukowski’s young adult life as a starving writer. The poems ‘young in New Orleans’, ‘flophouse’ and ‘spark’ are particularly brilliant in capturing Bukowski’s defiant rejection of mainstream ‘working stiff’ life and demonstrate his great resilience in developing his writing about people on the fringe. He lives in cheap motel rooms with crazy women and sits unshaven in his underwear drinking beer and writing poems into the dead of night. This is the Buk we know best and allows the reader to enter the book and helps us prepare for his more recent thoughts as he contemplates his rapidly approaching death, the legacy of his life’s work and the impact his loss will have on the loved ones he will leave behind.

In ‘days like razors, nights full of rats’ he writes about how his visits to libraries in the early days helped get him past his ‘birds of pain’. In ‘the word’ he lists many of his favourite writers and says matter-of-factly near the end of the poem, ‘it possibly kept me from/ murdering somebody,/ myself/ included.’ In ‘cool black air’ he praises how the typewriter had mellowed ‘his nightmares into a gentle sanity’ and how ‘it has loved me at my lowest.’ In ‘only one Cervantes’ while struggling with writer’s block he metaphorically explains the importance of the creative process in his life, ‘writing has been my fountain/ of youth,/ my whore,/ my love,/ my gamble.’

More interesting and subtle are his reflections on his health, his family and people in general as he ‘runs out of days.’ As the clock ticks down he writes and listens to Brahms and drinks wine and thinks about his cats and his wife. In ‘darkling’ he has a sleepless night and thinks of death out there ‘beyond the venetian blinds.’ In ‘confession’ as he waits for death he imagines his wife discovering his ‘stiff/ white/ body’ and feels sorry for her. Despite their ‘useless arguments’ he utters to her the words he always feared, ‘I love/ you.’ There are also some harrowing poems where Bukowski grapples with his nightmarish thoughts. The poems ‘eyeless through space’ and ‘in the bottom’ are particularly chilling.

Bukowski also sees the lighter side of growing old and of his impending death. In ‘mugged’ he wryly sums up his situation: ‘I now allow cars to pass me on the freeway./ I haven’t been in a fist fight for 15 years./ I have to get up and piss 3 times a night.’ In ‘the damnation of Buk’ he is ‘concerned that there will be nothing to/ drink in hell.’ And scarier still he is concerned that he will ‘have to listen to/ one poetry reading/ after another/ after another…’

Bukowski relishes his hard earned role as an outsider and occasionally uses it to condemn the values of middle America. He says in ‘in and out of the dark’, ‘I must have been a mole in another life, something that burrowed and hid alone.’ He is particularly disdainful of people who have deliberately wasted their lives by refusing ‘to see’ (‘be kind’). He hates  people who have led unexamined lives, ‘splashing around in their dumbness’ and although ‘they are able to/ speak,/ form sentences-/ but what/ comes out/ of their mouths/ are the stalest/ concepts, the most/ warped beliefs’ (‘splashing’). In ‘the area of pause’ he is scathing of ‘people who are worn away with striving’, who are unable to think for themselves- especially in an imaginative way:

they become unalive
because they are unable to
pause
undo themselves
unkink
unsee
unlearn
roll clear.

In ‘they are everywhere’ he encounters vicious, small-minded ‘violently unhappy souls’ who rage against everything ‘wasting their lives/ in hatred.’

‘Dinosauria, we’ is the best and most condemning poem in the collection and was made famous by director John Dullaghan’s film Bukowski: Born Into This (2003). http://topdocumentaryfilms.com/bukowski-born-into-this/ The poem points to the unequal, war-ridden planet and prophesies its destruction through nuclear fallout. In a rare overtly political poem Bukowski believes that this will be a purifying act which will eventually lead to Earth's rebirth.

In contrast,‘the bluebird’ shows a more sensitive, personal side to Bukowski’s writing. The birdbird in his heart ‘that wants to get out’ symbolises the  nice guy lurking under Bukowski’s tough façade. If you haven’t already done so, check out Bukowski reading the poem on YouTube:

This stripping back of pretense is echoed in other poems which might surprise the seasoned Bukowski reader. In ‘oh, I was a ladies’ man’ he is disgusted by his treatment of woman as a young man. He sees himself as a selfish, self satisfied ‘fucking dog.’  As ‘the walls get closer’ he attends a track meeting and watches ‘the horses run by/ and it seems/ meaningless’ (‘are you drinking?’). In ‘a suborder of naked buds he senses the failure of language to capture the whole of what he has experienced:

I would like to make
this
piece of paper
shriek and dance and
laugh
but
the keys just
strike it harmlessly
and
we settle
for just a fraction of
the whole.

This growing sense of doubt humanises and broadens the reader's perspectives on Bukowski's self parodies of his drunken bum hero Chinaski.

This collection shows Bukowski’s ongoing search and development as a mature writer. These poems are highly engaging but substantial in content. They wet the appetite of those traditional readers wanting to hear more from Buk the tough, hard drinking man but also point to new, more sensitive and fragile directions as Bukowski braces himself for death.

Shooting Gallery Vultures   is a collaboration  between the Oregon based poet Scott Wozniak and the American graphic artist Andrew Nut...