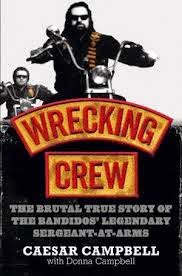 Wrecking Crew is the sequel to Caesar Campbell’s first book Enforcer (2010). Campbell was a founding member of the first Australian chapter of the American motorcycle club the Bandidos and was the club’s staunch sergeant-at-arms for many years. Most of this volume covers the period from February 1986 when Campbell was first incarcerated in Parklea Prison following the infamous ‘Milperra Massacre’ and November 1997 when he was cunningly edged out by the club’s president, known in this book as Mick K.

The writing in Campbell’s memoir is clear, candid and often compellingly raw.  He provides the reader with dozens of real life anecdotes- some of which will make your head spin. For legal reasons, he is sometimes reticent in giving us the full names and details of specific incidents. As he explains in the Epilogue: “As you’ve probably figured out, I can’t always tell you every detail that went on over the years – and I certainly can’t publicly identify some of the culprits. If I did, I might be able to fill four or five books, but I’d end up back in jail and so would half the blokes I know. Maybe it’d get me shot, too, not that that worries me. You die sooner or later. But I’m bloody not going to get locked up again. Hence this book is ninety-five percent fact, five percent fiction.” Let me tell you Campbell doesn’t pull many punches in Wrecking Crew and there are shit loads of violent incidents which will keep even the most reluctant readers turning the pages of this book.

The title Wrecking Crew is a reference to the name given to Caesar and his brothers- Bull, Shadow, Snake, Chop, Wack & Wheels in the early days, when they developed a reputation “as an unbeatable force.” In the Cross they smashed up countless blokes out of the Venus Room- “sailors and soldiers on R&R, right back to the Vietnam days, and then you had our faves: yob footballers. We’d kick the shit out of them”- we “was worth thirty” of them.

Campbell’s first person narrative is intimate and it is as if he is talking directly to you. You sort of slip into rider’s boots and stand beside him as he tells you his story. He comes across as a bloke who knows what he wants and doesn’t like to be mucked about. He is fiercely loyal to his partner Donna & to his extended family and club. What you see is largely what you get: A bikie of old warrior values whose word you can count on & who will back up his mates to the end in a fight.

As a sergeant-at-arms Campbell's job is to provide muscle and direction for the club. He takes care of security, fronts other clubs when necessary and always rides out the front of the pack on runs. He is a skilled and resourceful negotiator, in and out of jail, and a man who is highly respected and feared. He truly believes that “there is no greater honour than dying for your club.”

Campbell’s writing is pared back and gritty. He is particularly cluey at describing the heat of a full-on blue.  His tone in these recollections is matter-of-fact and the language concise but highly memorable. You get the impression that during a fight Campbell’s mind clicks into a different gear- all goes red- and he acts out of instinct, tuned by decades of bikie brawls and martial arts experience. He uses violence largely out of territorial necessity, to bash up blokes who reckon, “they could get a reputation by getting one over him.”

One day, he is attacked in Parklea Prison by two junkies in the gym. He breaks their arms with a steel weight. He quickly learns from them his former bikie club the Comancheros have paid the blokes a couple of caps to cut him up and he smashes them senseless, “I stomped on the legs of one and grabbed the other’s index finger, yanking it back with a bit too much force. The bone broke through the skin and when I looked at my hand it was covered in blood. I thought his bone had cut me too.”

Campbell also uses violence in jail in an altruistic manner to protect the underdog. When Tony, a young offender, is hassled by two predators Fats and Psycho, Campbell stomps on Fats’ leg until a sliver of bone pokes through his trackies and he smashes a 180 pound weight on Psycho’s hand which turns to mush. There dozens of other violent incidents recounted in the book but far too many to mention here.

The structure of the book is mostly linear, although to initially lube our interest, the Prologue is set in 1991 and describes how Campbell is shot strolling around a shopping mall in Sydney’s west. The language is highly descriptive and colloquial: “I was leaning against the warm bonnet of my hotted-up 1978 Fairlane- dark chocolate with a white vinyl top- when I felt it, whack, in the left eye, and suddenly all this blood started pissing out of my face. I couldn’t see. I could just feel it everywhere.”

Much of the first half of the book (Chapters 1-8) is focussed on Campbell’s views of the extended Supreme Court proceedings in regard to the Milperra feud and how he copes with prison life. For thirteen months he sits at the back of the court in his dark sunnies secretly railing against Justice Roden and especially the crooked cops who “blatantly lied” and verballed his boys.

Campbell was shot six times at Milperra in the stomach, lung, shoulder, forehead and back and was in a coma for a month before he awoke, fled the hospital and hid out in Perth for over a year.  Less known, is that he has “copped more lead than that in the years since.” As he writes in the Prologue, “I’ve had bullets come through the house, I’ve been shot in my front yard and out on the bike, and I’ve been popped in a blue. I’ve been shot at close range and from snipers.” Amazingly, Campbell survives every attempt on his life and he recounts in detail the extraordinary care his partner, ex-nurse Donna provides him in digging out the shrapnel.

Campbell reckons that he didn’t know that his former bikie club the Comancheros would be at the Viking Tavern and that he “never went there with the intention of hurting anyone.” He says he and the club had planned to celebrate his young fella’s fourth birthday party after the Viking meet.

Campbell mentions that he and his brothers broke away from the Comos and formed the Bandidos because they were sick of the Como President Jock Ross of running the club along para-military lines. The final straw “had been him screwing another member’s old lady.”

Seven people died in the subsequent shootout in 1984 between the Comancheros and the Bandidos, including a fifteen year old female by-stander. Interestingly, Campbell does not mention that four Comancheros were killed in what he refers to as “the ambush.”

Every day during the trial Campbell sits in Nepean Court thinking about how he is going to get to the Comos in the courtyard, “I dead set wanted to kill every Como there. Failing that, I started planning how I’d get them once we’d all been released.”

Campbell is faced with a dilemma and he takes the reader through the thinking behind it. He wants to avenge his brothers’ murders but needs to quell his rage and focus on the living- his wife, mother & his kids.

In jail, Campbell has good relations with the screws and undertakes courses to get time off for good behaviour.  Campbell reckons the loneliness in prison “eats you up”: “You’re locked in up in this little room all on your own and you can’t move. To help him survive, he focuses on his family, “the next visit, the next phone call.”

The latter chapters of Wrecking Crew (Chapters 9-20) recount Campbell’s release from prison in 1991 and focus on a series of fascinating anecdotes about Bandido runs and the eventual internal divisions which ostracise him from the club in 1997. He writes about the crazy characters, the clubhouse antics, the brawls, the shootings, his marriage to his long-term partner Donna and the work he obtains as a detailer on a release program and later as a bouncer and debt collector. In one job he collects a wad of cash for a bookie together with a punter’s left eye to show the bookie “the job had been done.” In another incident up the Cross, he cuts off the finger of an interstate standover man as proof his job had been completed. Campbell makes it clear that his work never had “anything to do with drugs” and he never harmed ordinary people going about their daily lives.

In his narratives, Campbell also provides some interesting social commentary on changes in the club scene in the Cross- “the old days are gone” (Chapter 9, 15, 17) on knife-fighting (Chapter 12) & on what to do in an all-in brawl (Chapter 11).

This is a grim, intense memoir about a bikie & his old lady who have survived to tell their tale. Wrecking Crew is an important and fascinating social document well worth the read. If you haven't read Caesar Campbell before you are probably better off starting with his first book The Enforcer (2010) which charts his early life, through to his antics as president of the early outlaw club the Gladiators, to his split with his next club the Comancheros, to the fatal showdown at Milperra in 1984. His account (Chapter 14) of the Commos ambushing of the Bandidos at the swap-meet on the grounds of the Viking Tavern is extraordinary! 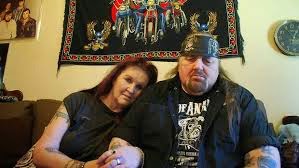 Find fifteen pages from the Wrecking Crew plus some photos: http://books.google.com.au/books?id=vlmd5S0UPv4C&pg=PT273&lpg=PT273&dq=caesar+campbell+wrecking+crew&source=bl&ots=gKJHOHHCjm&sig=cI-e77f5jm3FsKe-tuncioeZNgc&hl=en&sa=X&ei=osD5U8DuFoahugTyj4GYBw&ved=0CFQQ6AEwBDgK#v=onepage&q=caesar%20campbell%20wrecking%20crew&f=false 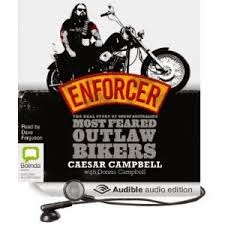 If you live in Wollongong, you can borrow Wrecking Crew from the Council library & Enforcer as a 6 CD audio disc. A fascinating listen on the way to work.
Posted by BOLD MONKEY at 10:38 PM