WHAT IS CHARLES BUKOWSKI’S BEST NOVEL? 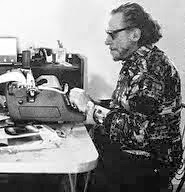 Bukowski wrote six novels during his life time and the obvious question to readers unfamiliar with his work is where to begin?  Having read all six of his babies in the last year, I rate the mothers as follows:

This novel was not published until shortly after Bukowski’s death and is intended to be an over-the-top satire on hard-boiled crime fiction. It is told from the point of view of Nick Belane, a L.A. private detective who is hired by Lady Death to find the real Celine, one of Buk’s early influences. Belane (a pun on Mickey Spillane) shares many of Bukowski’s vices, including heavy drinking, race track betting and a weakness for bimbos in stilettos.  The plot is totally preposterous and includes aliens who hide in dead bodies  to eventually take the shape of big breasted or long dicked humans.  There are many memorable lines in the novel but alongside these you may find some of the worst puns found in 20th century literature. The novel is shockingly bad and written deliberately so. The book’s title and the epigram should be a warning to you: ‘Dedicated to bad writing.’

This novel provides an insider’s account into the intricacies, the successes and failures of making a Hollywood film. It is told from Chinaski’s point of view and fictionalizes Bukowski’s experiences in the making of the film ‘Barfly’ which he wrote the script for and in which he appeared in a cameo role at a bar stool. The storyline overall is flat and provides few surprises. The people Chinaski and his wife Sarah meet are quirky and numerous but are mere caricatures and you never really give a stuff about them.

This is Bukowski’s first novel and is a highly biographical account of his life when he worked for the post office in L.A. for eleven years, throughout most of the 1960s. The novel has been highly influential because of its working class exploits but a close reading of the text reveals its many limitations. No doubt the novel is enormously humorous and entertaining, but perhaps over-rated in the Buk canon. The novel’s focus on the inner-workings of the post office may be amusing to some but the strength of its subject matter lies in Chinaski’s rejection of mainstream values and aspirations.

This novel is Bukowski’s most sexually explicit but you may soon tire of his alter-ego Chinaski’s many conquests of females two or three decades younger than him. The book probably has the best collection of mind-stomping quotes in all of the novels. His views on women, sex, drinking, in particular, are hilarious but also thought provoking.

In Charles Bukowski's Living On Luck (Selected Letters 1960s-1970s Volume 2) he writes to John Martin, his publisher at Black Sparrow Press, 'Women is my proudest and best work.'

This is probably Bukowski’s most auto-biographical novel. It traces his early childhood to his departure from school and to his pursuit of heavy drinking and working class jobs which help shape his identity as a writer. The novel dramatises many of Bukowski’s anecdotes about his early life in L.A., which readers, familiar with his life, will recall- the vicious beatings by his father, his terrible affliction with acne vulgaris, his visits to the public library & his days at LA City College and his early struggles on skid row. The novel is written with amazing clarity and is told without restraint.

This is easily Bukowski’s best novel. It fictionally traces his hard won development as a writer as he journeys through skid row America in the 1940s and 1950s. The language is raw and uncompromising but always highly credible.

The anecdotes he tells are quirky and hilarious. Ironically, it is the uncontrollable sessions of drinking, fucking and gambling which help to structure Bukowski's stories and which have helped to place the food on his posthumous table.