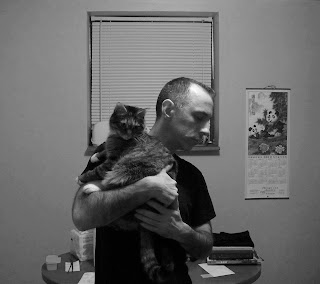 it muffled the screaming
the shattering glass
& knuckles thru walls

the masses,
the so-called living
don’t know it
but they’re
actually dead
each zipped up
w/in their skin
a nation
full of flesh
body bags
equipped
w/eye-holes
to pretend
they see
& mouth-holes
to emit bullshit
& nose-holes
to waste precious
fucking air

when i was 10 years old i bought
a tape recorder at a garage sale
& i went in my bedroom & shut the door
away from the crazy fighting going on
beneath other parts of the roof
& listened to my little black radio
for hours, waiting for certain songs
to capture on my new machine
i remember i had joyously recorded
“wild horses” by the rolling stones
& zeppelin’s “the rain song”
& a bunch of other favorites
but in the morning when i happily rose
& played my sacred tape back
i heard the shrieking & the curses
from my own house in the background
the hell was burned onto my magic tape
they’d even managed to corrupt
my beautiful fucking escape


ROB PLATH IS A 45-YEAR-OLD POET FROM NEW YORK.  A FORMER STUDENT OF ALLEN GINSBERG, HE HAS PUBLISHED HUNDREDS OF POEMS IN THE SMALL PRESSES.  HE HAS EIGHT CHAPBOOKS OUT: ASHTRAYS AND BULLS  (LIQUID PAPER PRESS 2003), AN IV BAG FULL OF BILE  (SCINTILLATING PUBLICATIONS 2007), WHISKEY AND CLAY  (PUDDING HOUSE PUBLICATIONS 2008), SQUEEZING BLOOD FROM THE ALPHABET  (ERBACCE PRESS 2008), TAPPING ASHES IN THE DARK (LUMMOX PRESS 2008), THERE'S A LITTLE HOBO IN MY HEART WHO FOREVER GIVES THE FINGER TO HUMANITY  (D/E/A/D/B/E/A/T PRESS), NICOTINE SCRIBBLINGS FROM A HAMMOCK IN THE VOID (GOOD JAPAN PRESS 2009 ) AND TREE KILLER INK ISSUE #4  ( 39 POEMS BY ROB PLATH). HIS FIRST FULL-LENGTH BOOK IS A BELLYFUL OF ANARCHY  PUBLISHED BY EPIC RITES PRESS IN 2009. HIS SECOND FULL-LENGTH BOOK OF POETRY THERE'S A FIST DUNKED IN BLOOD BEATING IN MY CHEST  WAS RELEASED IN 2010 BY EPIC RITES PRESS  AND A THIRD POETRY COLLECTION DEATH IS DEAD  WAS RELEASED IN BY EPIC RITES PRESS IN 2012. IN 2014, EPIC RITES PRESS RELEASED ROB'S FIRST CHILDREN'S BOOK HEARTS FOR BRAINS AND IN 2015, THEY RELEASED HIS CUTTING EDGE CREATIVE WRITING EXERCISE BOOK CALLED AN AX FOR THE FROZEN SEA. ROB'S FIRST NOVELLA SWALLOWTUDE WILL BE OUT IN 2016 UNDER EPIC RITES PRESS.  AND THERE IS MORE STUFF IN THE WORKS.