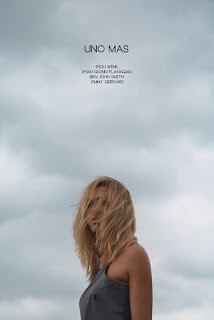 Uno Mas is the second collaborative effort amongst the English poet Rich Wink, the Northern Ontario poet Ryan Quinn Flanagan and the Melbourne poet Ben John Smith. It is the sequel to their earlier work The Holy Trinity, a short collection of verse published by Horror Sleaze Trash Press. Uno Mas is far more ambitious and experimental in style and consists of three extended stream of consciousness poems, one from each poet. The collection is also supplemented by four colour photographs by Jimmy Gerrard.

The title of the chapbook ‘Uno Mas’ means “one more” in Spanish and is attributed to Rich Wink who initiated the project. He explained the relevance of the title to me in a recent email, “When pondering a sequel to ‘The Holy Trinity’ I remember coming up with the title. I’d been reading a lot about that vintage era of boxing, those epic contests between Leonard, Duran, Hagler and Hearns. I was fascinated most by Roberto Duran, and the title is a play on his famous line of surrender ‘No Mas.”’

The structure and style of the book evolved through Ben Smith’s valuable input. As poet Ryan Quinn Flanagan explains, "We began writing a few early poems for the new project when Ben suggested that we not do individual poems like we did with Trinity but rather one long stream of consciousness. That then morphed into each of us doing one stream each, loosely connected but not directly related as each of us had no idea what anyone else was doing. When the streams were done, we brought Jimmy on board because we thought it would be cool to add some visuals to UM. Jimmy not only provided the visuals but did much of the leg work putting UM together. Lots of back and forth, input from all sides- it truly was a collaborative effort."

Jimmy Gerrard's photos are clear and sensual and help to create a sense of space. Wink says of Gerrard's involvement in the project, "I suggested bringing in James Gerrard, a photographer from Manchester, England. That was midway through the writing process. James had worked with Ben on a few projects and also shot the cover photo for my second full length poetry collection ‘Gord’ that was published through Ben’s Horror Sleaze Trash Press. We wanted James to collaborate, hence the inclusion of more of his wonderful photography inside the book as opposed to just a cover shot. We all trusted James and sent him our words, the photographs he took were fantastic. The girl in the photographs is a friend of James.”

‘Big Black’ is a highly experimental poem, full of free-wheeling associations, childhood memories, observations, anecdotes, personal theories and reflections on diverse topics, such as, philosophy, god, writing insanity, politics. The poem is a broth of ideation, creatively exploring and developing new ideas as it discharges onto the page. You will find a wealth of language invention in its use of unusual metaphors, similes and images.

The language is sometimes crude but outrageously funny. Flanagan, for example, uses an extended metaphor to describe how an illness he had lingered on: “a few weeks back I had a fever of 103/ and I kept taking Tylenol but the fever wouldn’t break/ it was a clingy motherfucker, as if you took its virginity/ and now it won’t stop calling.” In explaining how cold it is in Canada he uses the unlikely simile, “cabin fever is a real thing/ seven months of winter around these parts/ sometimes it gets so cold it can’t snow,/ that’s like being so drunk you can’t fuck.” I also find interesting Flanagan’s insertion of anatomical terms throughout the poem, including: adrenal glands, urethra, smegma, outie and sphincter.

Sometimes you turn away from the page and wonder what the fuck is going on. But overall, this is invigorating writing and Flanagan throws everything into it.

Asked about his processes of composition and intent in the poem, Flanagan replies, “In terms of 'Big Black' and the process involved it was very strange and easy.  Usually I write to music with a magnum of Chilean wine to loosen things up, but 'Big Black' was written in one sitting with no music or wine, just a glass of water.  I just wrote whatever came in my head, not knowing how it would turn out. Real stream of consciousness just as Ben had suggested and in an hour it was done. The next day I went back and corrected any spelling issues I could find and that was that.  No revision besides the spelling issues, everything real loose and easy.  Then I sent my part off to the others and they shot what they had my way.  The visuals came later as Jimmy was on vacation at the time and had to set up the shoot when he got back.  There was a lot of back and forth trying to get the formatting right, but the content was what it was.

As for my intention in writing 'Big Black' it really was off the cuff, no planning outside of that it should just be a stream of consciousness sort of thing.  I hadn't attempted such a thing in years.  I know Ben was heavy into writing streams at the time, I don't know if Rich was.  But yeah, I remember it was an unusually hot day here (much appreciated after seven months of winter in these parts) and I just kind of sat in front of the computer with a nice cold glass of water and zoned out for a while.”

An extract from ‘Big Black’:

writing is a sickness, not an art,
did you know that?

Also find some of his earlier books here:

Ben John Smith is a committed and determined warrior of the underground press. He writes what he wants and publishes whenever he wants through his Horror Sleaze Slash Press. All of Ben Smith’s publications can be downloaded for free from his site here: http://www.horrorsleazetrash.com/downloads/
Asked about his interest in stream of consciousness writing, Smith said yesterday, “I have been doing streams for a while- maybe my last six chaps. The stream is just my internal monologue of how I’m going and dealing with things.” Asked about his innovative use stand-up comedians Lenny Bruce and Bill Hicks who make cameo appearances in ‘Just But Doomed’ Smith says, “Snapping back to the comedians is like referencing what state of mind I was in and both helped to shape that state of mind and furthered my rant.”

His poem ‘Just But Doomed’ evolves through a tenuous string of ideas which are propelled by Smith’s bent, anarchistic vision. Anything goes. Everything is possible. All rules are broken. Narrative voices shift. Churchill speaks the words of Kennedy. There are echoes of the Australian tennis veteran Lleyton Hewitt shouting out COME ON. A small x is carved into the persona’s chest to relieve the pressure in his chest. Later in the poem the reader is asked to imagine a war ground with an x drawn on it.

All the dots in this poem don’t join up but rather rebel against the notion of coherence. Yet the poem is lively and opens up just enough to let us in.

An extract from ‘Just But Doomed’:

She finished her wine before she took the pregnancy test.

I wish I was falling
14,000 feet from the earth
every second of my life

That coolness of a cave man juggling a spear

It always rains where flowers grow

In the damp
Sometimes dark
Seeds
Peek
From
the
green

I just want to
hang stolen street signs in my room.

I write her love poems
but she doesn’t really like to read.

I paint for her
but everything comes out
like aliens

(reprinted with permission of the poet)

The title poem 'Uno Mas' is the most conventional in the collection. In the poem, the speaker recalls through flashbacks memorable incidents during his young adult life. The writing is highly descriptive and engaging.

In the first section of the poem, the speaker recounts his journey as a nineteen year old to Norwich. He hikes disconnected against the flow of traffic through the decaying ruins of the city to Anglia Square. In the second section, he discusses his relationship with an ex-girlfriend who has a strange obsession to build a wall to isolate herself from the world. The third section recounts another one of the speaker's youthful experiences, this time as a glass collector at the whorehouse Platinum Lace. In the poem's denouement, the speaker's hands are jarred by the sharpness of his house keys and he returns to the present. He chuckles to himself at the fondness of his reveries.

An extract from 'Uno Mas'

Life has a tendency to spit in your porridge.
The working women didn't really want to know me.
I scurried around gathering bottles and jars
but my attempts at small talk never got far.

When the customers got rowdy
I fled when the fists flew.
Dodging jealous roidheads and jittery drunkards
Who fell for their private dances.

I often thought long and hard donning the armour
and playing white knight,
but it made as much sense as fighting Boardman's windmill.
It simply wasn't worth it for six fifty an hour.

I cradle my thoughts the way any sane man does.
Hoping to be rescued by Eva Marie Saint
in a crop duster
Her porcelain hand would reach down and...

I hail cabs after they drive past.
I stand on the side of the road and look down Grapes Hill.
I put my hands in my pocket and feel the sharpness of my house keys.
A wet smile forms on my face
and I chuckle again.

Asked about his involvement in the Uno Mas project Rich Wink is affable and upbeat:
“It's quite a unique story really. I first came across Ben's work when I was running the litzine Gloom Cupboard http://gloomcupboard.com/2009/08/31/a-day-in-the-life-of-an-australian-poet/, we began corresponding from there, and noticed we had a love of the same writers like Bukowski and Palahniuk and quite a few things in common. We've been writing snail mail to each other for years. Ben very much likes to interact with other writers by actually writing in the traditional sense.

The unique part of this collaboration is that none of us have met face to face. Our relationship as writers and friends has been forged through online and written correspondence. I think that is a sign of the times as we all have online relationships through social media and forums and our ‘real life’ friendships and relationships. Part of the reason for not meeting yet is down to geography, and part of that is due to work commitments and finances. Alongside being creative we pay the rent like anybody else doing run of the mill jobs.”