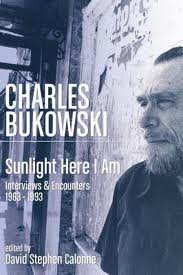 This is another outstanding book by David Stephen Calonne, a long-term academic devotee of Charles Bukowski. In this volume he collects the best & most revealing interviews of Bukowski over three decades. You will find some similar question/ answer responses, but overall, there is an amazing variety in Bukowski’s responses. Like much of his writing, as Calonne points out, he is able to produce an apt metaphor, or crude but honest insight almost at will.

The title of the collection of interviews is explained by Calonne in his excellent introduction. It is widely known that Bukowski ruptured his stomach in 1954 and almost died in the charity ward of the Los Angeles County General Hospital. In explaining the incident in 1969 to Knight Magazine and the torrent of poetry which followed he remarked, ‘I was almost dead anyhow and it was kind of like sending a message…Sunlight, here I am’.

The collection is an essential addition to a Bukophile’s library. There are numerous photos and a few of Bukowski’s minimalistic drawings.

If you are interested in zoning in closer, the best interviews include the following:

Here are some of the highlights of what Buk has had to say to the 34 interviewees in the book. I have tried to keep these to a bare minimum. For each of these headings and for dozens of others he always has something interesting to say:

On Bad Poetry: ‘There’s too much bad poetry being written today. People just don’t know how to write down a simple easy line. It’s difficult for them; it’s like trying to keep a hard-on while drowning- not many can do it.’

On Critics: ‘I don’t want to be totally revered or looked upon as a holy man or a miracle worker. I want a certain amount of attack, because it makes it more human, more like where I’ve been living all my life.’

On Drinking: ‘It joggles you out of the standardism of everyday life, out of everything being the same. It yanks you out of your body and your mind and throws you against the wall. I have the feeling that drinking is a form of suicide where you’re allowed to return to life and begin all over the next day.’

On Fighting: ‘Trouble was, I liked it. Liked the impact of knuckles against teeth, of feeling the terrific lightning that breaks in your brain when someone lands a clean one and you have to try to shake loose and come back and nail him before he finished you off.’

On His Audience: ‘I’m simple, I’m not profound. My genius stems from an interest in whores, working men, street-car drivers- lonely, beaten-down people. And those are the people I’d like to see reading my stuff.’

On Human Relationships: “You think they are so intelligent, so full of life the first few days. And then the reality creeps in. ‘Jesus Christ, you leave your stockings all over the floor, you idiot asshole jerk! You flushed the toilet and there is still a turd in it!’ So, human relations don’t work, they never did and they never will.”

On Love: ‘Love is a form of accident. The population bounces together, and two people meet somehow. You can say that you love a certain woman, but there’s a woman you never met you might have loved a hell of a lot more.’

On the Truth: ‘I do cheat a little; I brighten it up. It may be mostly true, but I can’t help improving it with one thing that will make it sparkle a little more.’

On Why He Started Writing: I started writing not because I was so good, but because others were so bad at the time. They were running a poetry con- little boxed-in poems with all the impact and interest of an enema.’

On Writers: I’d rather talk to a garage mechanic who’s eating a salami sandwich for lunch. In fact, I could learn more from him.’

On Writing: ‘I want the bacon in the pan and burning.’

In his novel Hollywood (a short segment appears in Sunlight) Bukowski's alter-ego Chinaski has the last say on interviews. While in Germany to promote his work he asks his female interviewer for another drink, otherwise he 'wasn’t going to talk anymore'. The drink quickly arrives and as he slams it down he realizes, ‘It suddenly seemed foolish to me that anybody wanted to know what I thought. The best part of a writer is on paper. The other part was usually nonsense.’

Buy Sunlight Here I Am: Interviews & Encounters 1963-1993 through Book Depository.