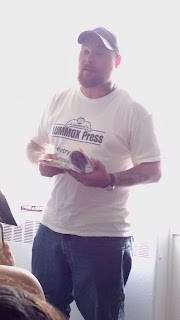 GETTING RICH (a dog's story)

So instead
he looks down onto me
and says:

I don’t talk about you
Much to anyone
It’s not shame
More like fear.

And Fear is just a tool

Otherwise it overcomes you
You become so saturated
With fear
That there’s nothing left
To fear.

All I know for sure
Is that nothing is for sure

THE TOWERS OF THE JUMPMASTER

You never walked anywhere
At Jump School
You ran everywhere
Like a man with purpose
And somewhere to be
Constantly vigilant
You never knew when the call would come out
PLF RIGHT!
PLF LEFT!
And then you would immediately take form
Fall directly to the ground
Making contact
With all 5 points
Boots calf thigh ass push-up muscle
Back up shouting
“ALL CLEAR SGT AIRBORNE”
Running in formation
Singing handed down
Battle songs in cadence
A soldier’s choir praising terrible gods
Every last one of us scared
But more scared of failure

BIO:
Joe Gardner is an Army Airborne Veteran and a 2nd Generation American drifter and writer who calls East Lakewood, Ca home. More nights than not he can be found at home, enjoying the comfort of his family and his dog. Joe is the Founder and hired gun for Working Class Production, as well as creator and co-producer of The Last Sunday, An Evening of Poetry and Art.

He is also the 2013 Joe Hill Labor Poetry Award recipient and his work has appeared in The Modern Drunkard Magazine, The San Gabriele Valley Poetry Quarterly, Cadence Collective, Spilt Ink Poetry and AMASS Magazine. He has also been published in the following anthologies: Gutters & Alleyways: Perspectives on Poverty and Struggle, The Men’s Heartache Anthology,Lummox Anthologies, 1 thru 3, Edgar Allan Poet 3.