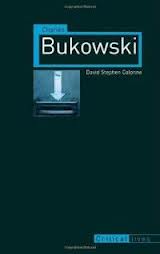 This is the latest addition to the prestigious Critical Lives series which explores the lives and major works of leading cultural figures of the modern period, including artists, writers, philosophers and architects. It is fascinating to find the American writer Charles Bukowski (1920-1994) has now made it amongst such luminaries as Samuel Beckett, Salvador Dali, Fyodor Dostovsky, Ludwig Wittgenstein, James Joyce and others. Calonne is best known for his editing of the excellent Bukowski collections for City Lights: Portions from a Wine-Stained Notebook (2008) and Absence of the Hero (2010) and More Notes of a Dirty Old Man (2011).

This is a concise but comprehensive overview of Charles Bukowski’s life and work. The book is rigorously researched and  provides the general reader with a rich vein of information to help guide their future explorations of Bukowski’s prolific writings. Calonne’s commentary is clear, erudite and full of interesting anecdotes and opinions. He integrates in a seamless fashion a discussion of Bukowski’s personal and professional lives and establishes the context in which every major book was written. To add appeal, the text is accompanied by more than thirty black & white photographs, letters and illustrations.

The book marches on quickly and is broken into seven chronological chapters. In the opening chapter ‘Deutschland, Vaterland, The Name of the Father: 1920-1943’ Calonne examines Bukowski’s early life and suggests that his abusive childhood lead to a ‘kind of psychological dissociation’ or estrangement which was to become a central motif in his adult writings. Calonne, no slouch himself in the mixed metaphor department, concludes: ‘His literary style was forged in the crucible of his youthful anguish: he would learn to handle words as if they were fists, pounding back the injustices he had endured. Writing became one means of fighting his way out, of steeling himself, to avoid self-destruction.’

In chapter 2 ‘Solitute and Music in Small Rooms: First Stories and Poems , 1944-1959’ Calonne documents Bukowski’s ‘incredible dedication to writing’ in the years after his first published short story ‘Aftermath of a Lengthy Rejection Slip’ and follows his innovations in writing and his desire to break away from the strictures of elitist academic verse. We encounter Bukowski’s first love Jane Cooney Baker and Calonne discusses at length Buk’s ‘near death experience’ at the Los Angeles County Hospital in 1954 and the astonishing outpouring of poems, stories, essays and reviews which follow. Bukowski’s intense determination to stake out his territory and develop an original style- ‘a mixture of sensitivity, violence, humour, desperation, sometimes grotesque imagery and lyric, open vulnerability’ was consciously developed- and ‘had indeed evolved slowly over a ten-year period from approximately 1946-1956.’

Perhaps the most interesting chapters are 3 ‘Christ and Dionysus: Flower, Fist and Bestial Wail to Crucifix in a Deathhand, 1960-1965’ and 4 ‘Age of Aquarius Dawning: A Dirty Old Man among the Beats and Hippies, 1966-1969’ which discuss Bukowski’s growing reputation as an underground writer during the 1960s. He submitted to hundreds of ‘little magazines’ in the early 1960s and was widely known as the ‘King of the Littles.’ He regarded most poetry as ‘snobbish and fake’ and in his own work he charted real, down & out territory: ‘roominghouses, landlords, alcohol, walls, waiting, poetry, death, insects, animals, artists, solitude, music.’ As Calonne quotes from Bukowski's famous newspaper column ‘Notes of a Dirty Old Man’: ‘I’d rather hear about a live American bum than a dead Greek god.’

Calonne argues that Bukowski’s free verse poetry style followed a long American tradition beginning with Walt Whitman. He also learnt from the Imagists like William Carlos Williams and Ezra Pound, as well as the Chinese poet Li Po ‘to place a clear picture before the reader in every line- a technique he also utilized in his prose style.’ This ‘dedication to artful simplicity’ was based on colloquial American speech and included ‘clear narratives depicting the lives of ordinary, everyday people.’ 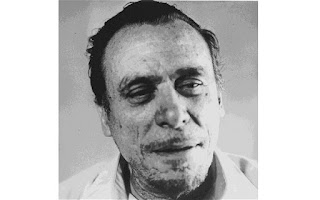 Bukowski published seven volumes of poetry between 1960-1965 and Calonne acknowledges that his breakthrough book was It Catches My Heart in its Hands (1963). 777 copies of the book were published by Loujon Press using an ancient Chandler & Price letter-press. In the book’s introduction John William Corrington described Bukowski’s poetry as ‘the spoken voice nailed to paper.’ In an intriguing letter in October 1963 Bukowski responded to Corrington’s question as to how he writes, creates: ‘You don’t. You don’t try…You wait, and if nothing happens, you wait some more. It’s like a bug high on the wall. You wait for it to come to you. When it gets close enough you reach out, slap out or kill it. Or if you like its looks you make a pet out of it.’ In defining his poetics, Calonne points out that Buk wrote in the Webbs The Outsider magazine: ‘While you’re living it might be best to live from the source stuck inside of you…You are not going to worry about spondees, counts, or if the endings rhyme. You want to get it down, hard or crude or otherwise- any way you can truly send it through.’

Calonne also traces Bukowski’s association with various writers and editors of the 1960s such as John Martin, Carl Weissner, Douglas Blazek, the Canadian Al Purdy and many others. He also shows how Buk gradually returned to writing prose- short stories, essays and book reviews. He regards his book Confessions of a Man Insane Enough to Live With Beasts (1965) as his first ‘significant breakthrough in fiction.’ The work represented his ‘first extended autobiographical prose’ and was also noteworthy because the name ‘Chinaski appears here for the first time which Calonne comprehensively explains.

Another major turning point in Bukowski’s career came in 1969 with the publication of Notes of a Dirty Old Man from his Open City columns which he wrote for eight years. The first edition had a print run of 28,000 copies and it soon lead to his first public poetry reading at The Bridge, a bookshop off Hollywood Boulevard in December 1969. Calonne points out that Bukowski initially hated the readings but eventually enjoyed the jet travel and adulation. Writing to Joan Jobe Smith Buk concludes, ‘I just lift a beer bottle and the crowd goes crazy.’ Due to his ‘increasing notoriety’ Bukowski began to give more interviews where he provided insights into his writing processes. There is a brilliant description recorded in Calonne’s book on Bukowski Sunlight Here I Am: Interviews & Encounters 1963-1993 in which Calonne likens Buk’s act of writing to 'a kind of seizure'. Bukowski says: ‘I feel a tightness…Actually, feel bad- like I’m about to get into a fight, sort of…Finally, I sit down, drawn to the machine as if by a magnet, against my will. There’s absolutely no plan to it. There’s just me, the typewriter and the chair… Then I enter into the act with a kind of fury, writing madly for four, five, even eight hours.’
.
By 1970 Bukowski is an established underground writer with a growing readership. He starts writing for adult magazines, and with John Martin’s financial backing, Bukowski writes his first novels for Black Sparrow Press, starting with Post Office and Factotum. This era is covered in Chapter 5 ‘A Professional Writer and the Dogs from Hell, 1970-1978.’

Calonne suggests that Bukowski knew he was about to be sacked from his Post Office job and he approached Martin to work out the deal without telling him his job as a postie was fucked. The rest is history. Calonne briefly examines each book Bukowski cranks out during this highly productive period. His commentary and assessment is astute and highly informed. For example, in his discussion of Women (1978) Calonne discounts the sexism Bukowski’s writing is often accused of, ‘Indeed, any pretensions of Chinaski to triumphant, phallic malehood are deflated since during his many beddings of women he is frequently unable to achieve an erection and he constantly exposes his fear, vulnerability and impotence: he is often too drunk to perform.’ Calonne goes on to explain how Chinaski ‘synthesizes Dionysian themes of passion and irrationality’ as he waits for the arrival of the next female beer in hand.

Also fascinating is Calonne’s reference to what Bukowski told Douglas Howard in 1975 about how he flips between short story writing and poetry: ‘Yeah, I get my natural kicks writing short stories, a relaxer; then I go back to the poem; I jump back and forth. One helps the other.’ He found stories much easier to write: ‘They just come straight on out. I’ll change a word or two that’s awkward. I revise poems much more.’

Another significant breakthrough for Bukowski,  according to Calonne was his interview with Rolling Stone Magazine which appeared on 17 June 1976. The article ‘The pock-marked poetry of Charles Bukowski: Notes of a dirty old mankind’ was penned by Glenn Esterly. It helped to spread the word about Bukowski’s writing to a wider audience and established many of the legends we are familiar with today. The article still reads remarkably fresh today & can be found on Bukowski.net here: http://bukowski.net/poems/int3.php

The last two chapters of the book focus on Bukowski’s comfortable life in San Pedro and on the events leading up to his death at age 73 from myelogenous leukaemia in 1994. It examines his on-going parade of books, his relationship with Linda Bukowski, his late style and subject matter. Thankfully the reader is sparred a discussion of his many posthumous works.


This is an exceptional book. What makes Calonne’s book really stand out for me is his explicit discussion of Bukowski’s evolving style and his clever analysis of a dozen or so significant poems to help explain Bukowski’s remarkable craft. I would love to read a more lengthy and considered discussion of Bukowski’s poems by Calonne. It is also amazing how Calonne can condense huge chunks of Bukowski’s chaotic life in such a refined and literary way. My main criticism, is that there is very little room in a book this size to elaborate in any significant detail. If you consider that there are more than sixty pages of notes and photos, that leaves only about 150 pages of actual literary biography. Another small point, like other volumes in the 'Critical Lives' series, there is no index to help the reader quickly chase up specific references made in the main body of the text.