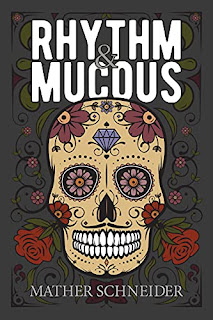 Mather Schneider’s latest poetry book is a solid collection of 37 poems some of which first appeared in excellent small press publications such as Slipstream, HST, Misfit, Nerve Cowboy, In Between Hangovers, Winedrunk Sidewalk, Paper & Ink and Frigg. Most of the poems pre-date his permanent move to Mexico from Tucson with only the last three poems ‘Eclipse, August 21, 2017’, ‘Breathe the Damp’ and ‘Curtains’ directly linked to his new life there.

Schneider told me in December 2020 about the collection, “The poems in Rhythm & Mucous are fairly old. ‘Headlocks’ is probably 15 years old…That’s the thing with publishing, there’s often such a delay that a book doesn’t reflect where a writer is at that moment.”

The writing appears more pared back, more matter-of-fact with less use of figurative language than in some of his earlier work.

Schneider’s poems are highly accessible, and typically are first person narrative in form, from his point of view. In a recent interview with Matt Forney of Terror House Press (‘Down in the High Desert, 12 August 2021- see the link below), Schneider says candidly, “I’m not a professional writer, hardly think of myself as a writer at all. I chronicle my life, and there’s plenty of drama and conflict here in Mexico to write about.”

In explaining the origins of the book's title (in the same interview) Schneider says, “25 years ago, I lived with a guy who would always say, ‘Life is just rhythm and mucous.’ I don’t know if he made that up or if he heard it somewhere. I was just starting to send my poems out to small press journals and thinking about a book, and I thought that would make a great title. Over the next 25 years, I published 5 books and a couple of chapbooks and never used the title. I forgot all about it until I came across it in an old journal. I decided it would fit with the manuscript I put together.”

The front cover is in straightforward calavera style by the young American artist Matt Lawrence who does all of the Terror House covers. It is effective because it connects to both death and Mexico, subjects that run through Schneider's book.

The poems in Rhythm & Mucous are often inspired by Mather’s former job as a cab driver he had for 15 years in Tucson, Arizona and other unremarkable day to day experiences- trips to the doctor or dentist, attending a funeral, talking to people at a bar or coffee shop, watching television and the like.  Yet within the ordinariness of his subject matter there is a uniqueness and grittiness and universality of his writing which makes it rise above the bullshit of the everyday.

Schneider’s representation of himself as an outsider allows him to make comments on human behaviour, social injustice, art and the big questions: mortality, the unreachable distance between us and what he refers to as ‘the curse of an answerless universe” in ‘Wanderlust’.

In ‘The Tooth Monkey’ Schneider uses a trip to Mexico to not only document his physical visit but also to draw out associations with teeth in his personal memory and that of the Holocaust and of  ancient anthropology:

I drove down to Nogales Mexico yesterday to get a

The roots were curled

and the 2 blue-smocked girls spent 45 minutes

on the stubborn motherfucker.

They used every saw, pincers and pliers in their tool kit

and even had to yell down the hall

for Mario to bring in some special implements.

When one got winded

and they used so much Novocain my right

I walked out into the sun numb

with a gap in my head and blood on my chin

until some kind old Mexican lady looked at me

and pointed at her own chin.

I looked at my reflection in the plaza fountain

and cleaned myself off.

I drove home to Tucson.

caught the seat on fire

My dad used to tell me the Tooth Monkey

came at night to grab my teeth

and leave me quarters

how my mother shushed him

how we all smiled

I thought about the heroin addict I met

who dug most of his teeth out with a pocket knife

at his kitchen table

and the old logger in Riley’s Pub

who had made his own dentures

from a mail-order kit

and my friend Danny Beecham

who got his teeth knocked out when he was 12

and I thought about the teeth on the floors

and the teeth they’ve found of people who lived

thousands of years ago

buried in the mud,  buckets of them, truckloads,

pits full of them…

Later that night I turned my pillow over

because it was wet with sweat.

I heard the monkey rattling

his bracelets of teeth

as he sat on my chest

and licked my chin

until I fell asleep.

(all poems posted with the permission of the writer)

The emphasis in many of the poems is admirably not on the speaker himself but rather on the personality and traits of the people he meets- both good or bad.

Schneider is very astute at describing the repulsive, selfish, callous, drugged-out or deluded behaviour of people who he has the misfortune of meeting. ‘Fatty’, ‘The Dickhead in #14’, ‘Lemons’, ‘Traci’, ‘Bar Rush’, ‘One For Boris’ and “The Pussy Never Came Down’ are all interesting studies of hostile, incredibly stupid people.

In ‘Headlocks’ after a few beers in a pub called the Golden Nugget, the speaker is immersed into the fascinating world of Doc:

I met the Masked Marvel the other day.

He was drinking whiskey at 3 in the afternoon

at the Golden Nugget.

Everyone called him Doc.

Years ago, he was one of those

moving from town to town, grappling with men

It was quite a life,

drinking from ship-sized barrels of rum,

a new bone or joint cracked and twisted each day.

All the towns, all the crazy fun.

He told me he still had his leather mask

Life was real back then, he insisted,

He had been beaten and had come back for more

of rubbing men’s faces into the mat,

the screams from the crowd for more gore.

He thought it a lucky game

and he fancied himself a winner

I was believing his story,

what with all the details and facts he had

but when he stood to go to the bathroom

the bartender cleared things up for me.

There wasn’t a word of truth to any of it.

Doc was a nutcase, a few shots

short of a clip, usually harmless

but if he tried to demonstrate any

of his old “wrestling” moves on me, it

was suggested that I leave.

I thought about the other man

inside the Masked Marvel and inside

all of us, the man who holds

until he finally snaps

unleashing bullets into the ring

of the Circle K

I pictured him strapped

to an electric chair

or pinned against the ropes of madness,

costumed in a straightjacket.

I thought about that other man

we all fight each day

and when he returned from the bathroom

I looked at the Masked Marvel, old Doc

and raised my glass to the pain.

More sympathetic portraits are revealed in the poems ‘Rizelda & the Street Sweeper’, ‘Tombstone’ and in particular, his poignant poems about his wife and her realisation that she will never give birth to a child ‘My Woman Lies Barren’ and in her declining health, as portrayed in ‘Curtains’ and especially, ‘Breathe the Damp’:

is hot. A long thin tube of light

sputters over the doctor’s bald head, a polished

stone. An x-ray hangs on the wall

with a skeleton buried in it. A ship

in a bottle on his desk

that my wife and I can see under

to his animal-skin shoes, the floor chewed

of his chair. A yellow stain in the corner

of the ceiling. What horrors are happening

at the thought of my angel’s urine

in a cup. The cups for the water dispenser

full of dust and spiders. Her knees swell red and hot

trembles on the doctor’s table. Why are you nervous?

he asks her. It’s only Death

preparing his needles. His poison smile

crippled at 43. Twitching in pain she thinks of the baby

she could never have

cries and squeezes my hand

while the doctor injects her

as if to kill bugs in a wainscoting. Later that night

we lay in bed in the little house

in Hermosillo, sticky as flypaper. Lightning

starts in the south, slices the Sonoran sky

of a wrist. Rain

like gravel on a coffin lid and a vile

blowing out his birthday candles. The lights

of the fan slow, and stop. I open the window.

We lie there sprayed

of a ghastly wish.

Also noteworthy in the collection are Schneider’s “nature” poems which he has incorporated into his work since his first book of poems Drought Resistant Strain (Interior Noise Press, 2010).  The poems ‘Lizard Diddy’, ‘One Time In Arkansas’, ‘Nothing Much Ever Lived’, ‘Sunday Afternoon With Ara In July’ and ‘Petroglyphs’ all reference a declining world strangled by its hubris and lack of self awareness.

Schneider writes about what he knows, the everyday- driving cabs, being inside bars and his relationship with his woman. His writing is raw but carefully honed, combining acute insight into people and himself- with wry humour and understated humility.

Read at Terror House Press: ‘Down in the Desert: An Interview with Mather Schneider’ here: https://terrorhousepress.com/mather-schneider/