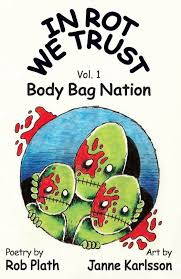 In this slim volume of graphic poetry, American writer Rob Plath joins forces with Swedish artist Janne Karlsson to launch an unrelentingly morose and macabre take on life & death. Through a series of 33 startling poems, the duo explore all-things-death: the ephemeral, ugly nature of every day life, how many of us lead a complacent, death-in-life existence, the inevitability of our quickly approaching doom and Plath’s & Karlsson’s urgent need to record all these thoughts & feelings through their art.

The front cover is a parody of a typical family photo. Instead of glistening teeth and wide smiles, Karlsson inks us a caricature of a father corpse posing with his two kids- all are fetid green & blood splattered, with their mouths grimly stitched shut.

The title ‘In Rot We Trust’ is an obvious pun on the American motto ‘In God We Trust’ but you will find the poetry in this collection apolitical. Instead, Plath is more concerned with examining the nature of his personal suffering and spews bile at the cosmos for allowing his birth.

In two poems entitled ‘Dear Universe’, he crudely and cynically addresses the cosmos in an accusatory tone: “Yr silver-linings/ are all shit-stained” and “cheers for all/ the fucking holes// there’s not/ much left/ for you to stab.”

This idea of a malevolent, personified supreme being causing suffering and emptiness & death is a central motif in this chapbook.  In ‘Cigarettes Sizzling in Yr Wounds’ Karlsson’s illustration shows a big hand reaching down from the sky clutching a cigarette. Below, a sprawled naked man grimaces in pain from several bleeding cigarette burns to his body. 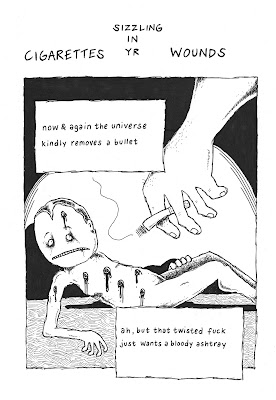 Plath tersely sums up the existential human condition through an illuminating metaphor:

ah, but that twisted fuck
just wants a bloody ashtray

Another important perspective that Plath presents his readers with is the idea that many of us, although still breathing, are already dead & a waste of fucking space. In the powerful title poem, ‘BODY BAG NATION’ Plath & Karlsson represent the average person as deluded & self-obsessed: 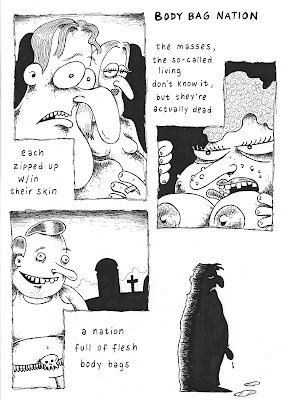 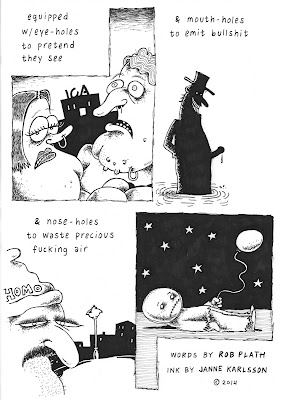 Rob Plath’s response to this personal & metaphysical crisis is to deeply reflect on his experiences and to “launch another motherfucking poem” (‘at 45’). In ‘a good poem’ he succinctly sums up his work: “is a cross/ between brass/ knuckles// & a toe tag.” Further, in ‘Guts & graffiti’ he metaphorically posits:

a poem begins
w/a fucking
hand grenade
in the throat

Karlsson’s accompanying illustration shows a body exploding into many parts as the speaker of the poem attempts to extend his middle finger to the heavens.

IN ROT WE TRUST is an irreverent, deeply dark portrait which rails against the tombstones of conventional thinking & the writing of poetry. As in the poem ‘Look’, Plath takes a box-cutter to our superficial notions of appearances & hope. In the end, there is no escape. 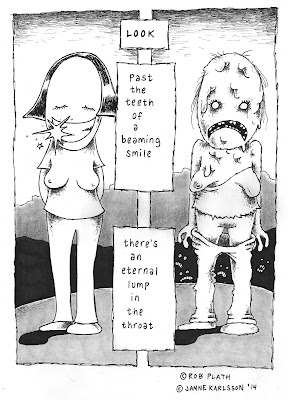 Interestingly, in one of the last poems, Plath states: i’m so slow lately… maybe / i’m dead.”

Check out Rob Plath’s site which provides info- especially on how to buy his books, photographs and artwork: http://www.robplath.com

The madness that is all things Janne Karlsson: http://www.svenskapache.se

For a limited time find a generous sample from IN ROT WE TRUST: https://issuu.com/poetraindog/docs/_inrot_1_sampler__1_ 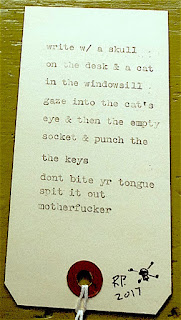 In my copy of the book, I received from Plath a ‘toe tag poem’- an original poem manually typed on the back of a tag intended to be attached to the toe of a deceased person. How cool!