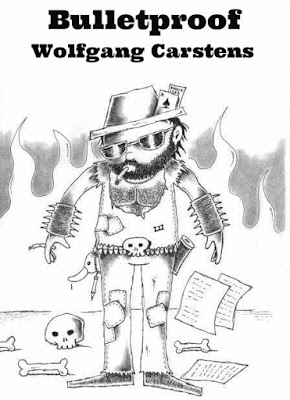 In his latest chapbook Bulletproof, the Canadian poet Wolfgang Carstens, revisits the tragic-comical tomb of his favourite topic- death. The collection consists of twenty-one poems which are characteristically short, first person confessional in form, written from Carstens’ rapidly aging, 45 year-old point of view. His tone is often terse and self-ironic as he kicks the shit out of Western taboos about death.

In many of the opening poems, Carstens recalls the deaths of celebrities, acquaintances, friends- and then edging closer- that of his dog, his father, his grandmother and then a lover; until the circle closes even more tightly and he points the bone at himself. In the dozen or so poems which follow, he sticks his head into the ass of death to explore and extend his personal take on its many perspectives and ambiguities.

In the title poem poem “I used to believe”, Carstens intuitively senses the inevitability of his own, quickly approaching death. On his forty-fifth birthday he oddly feels vulnerable and realises that he is no longer “bullet-proof”, that as he ages he is becoming more susceptible to many diseases and ailments, and even a common cold, can now leave him bedridden for many days. Carstens concludes the poem in a derisive, self-mocking, but celebratory way:

your days
are
numbered.

The poem “i turn 45” extends Carstens’ quirky, existential view of life and death. He lists a litany of diseases he has recently been diagnosed with, including cancer and concludes ironically, as if he is a television presenter with a breaking bulletin about his own health:

i hobble around
like an old woman
with my cane.

still,
i never thought I would make it
this far.

i am only 20 years
from retirement

and then
i can start
enjoying
my life.

The poem “in the past five years” further illuminates Carstens’ fuck you attitude towards death, which perhaps helps him rise above the gloom of his ultimate doom. It concludes:

my doctors
have already given me
an expiration date.

with a bottle of Patron,
a full pack of cigarettes,
and a song in my heart,

i swear to fucking Christ
i ain’t never gonna die.

Note that as represented in his best known collection Crudely Mistaken For Life (2010), Carstens does not dwell morbidly on death but rather sees death more broadly as a natural stage of life. He believes, as in the poem “it’s not rocket science”, that we must make each day, each experience count. To live life to the max, authentically and without regret:

so when Death comes
to take you,

you have no unfinished business,
your loved ones know exactly
how you feel,
and your bucket list
is empty.

This idea of celebrating life in the grim face of death is also illustrated in the concluding poem of the collection, “i want my funeral.” In the poem Carstens states that when he dies he does not want his friends and family (and readers) to dress in black and to mourn his loss, but to attend his wake and to party on. He exuberantly writes:

put a bottle opener
on my casket;
pack it with ice
and turn it
into a beer cooler;

peel back my flesh
and turn my skull
into a hash bong.

celebrate the fact
that i'm dead
and you're not.

The cover illustration is by Carstens’ long-time collaborator, the Swedish artist, Janne Karlsson. Carstens is depicted as a hipster gunslinger ready to release another boom mother-fucker poem, as the flames rage wildly behind him.

Wolfgang Carstens digs death. He is fascinated how death thrusts a stake through our identity, our consciousness: how it ends all our hopes and dreams for the future. But in Carstens’ fiendish, creative hands, death can also be seen in terms of a celebration, a renewal, a beer in the hand amongst equals.

“In a drunken stupor” as Carstens claws across the floor on his hands and knees, he thinks about “something worthy” they can engrave on his tombstone. What he comes up with is a masterstroke:

surely
one more
won’t kill
me.

BULLETPROOF will be released through Grey Borders Press. The book is only $5 CDN plus shipping. It ships in mid- January and can be pre-ordered here: http://greybordersbooks.jigsy.com/wolfgang-carstens
Posted by BOLD MONKEY at 10:51 PM