From Serbia With Love: Another Bukowski Tattoo Narrative 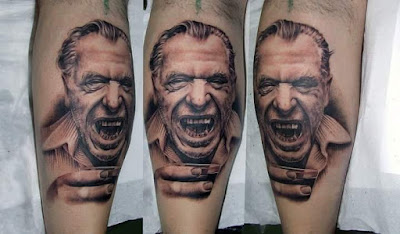 I recently received an email from an ardent Bukowski fan in Serbia who was keen to show me his Bukowski tattoo. When trawling the net last year for my post The 15 Best Bukowski Tattoos Online, I briefly considered including it: https://georgedanderson.blogspot.com.au/2015/03/the-15-best-bukowski-tattoos-on-line.html

The three legged tat is a photo realistic representation of Mark Hanauer’s circa 1981 photo of Bukowski. The original photo can be found in Abel Debritto’s article in Jacket Magazine Big Time: Charles Bukowski in Evergreen Review: http://jacketmagazine.com/40/debritto-bukowski.shtml 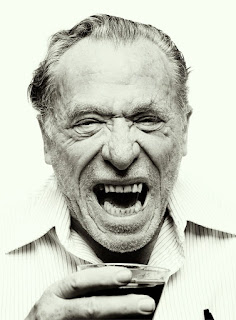 I asked the Sebian bloke, Predrag Almazan, why the fascination with Bukowski.

His reply, “Well...you know how some things and moments in life help define who you are? I always loved to read, and one day, when I was 15, at my grandmother’s apartment I found a book with an interesting cover picture : It was Ham on Rye by Bukowski. 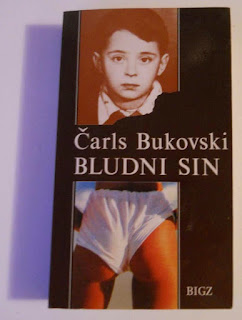 “I was writing poetry myself up to that moment for about 2 years, but I followed forms. Then, I discovered that you don't need forms, or rhymes, you have free verse. So, about that time, 1999, puberty, first sexual experiences, alcohol and drug abuse, NATO bombardment of my country (Serbia), I was changing in what I am now in part thanks to him, or you might say, my fascination with him. I have his every novel, and poetry book published here, even his comic - The Day it Snowed in LA, which only came out once in 500 copies in my country.

“I still write poetry, though I found my own flow, but I still use free verse, and I still love reading poetry mostly thanks to him. So, as years passed, and I got to know one of the best tattoo artists in Serbia Ivan Sabo "La madre muerta" https://www.facebook.com/lamadremuerta I had to do Buk’s portrait, so I found a black and white picture of him, that not only represented him well but also was a great picture by itself, and got it tattooed.”

The tattoo five years on: 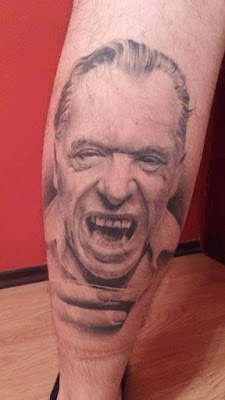 Bukowski is either hoisted on a pedestal or maligned for opening up poetry to the masses and encouraging the widespread writing of poetry. There is certainly no curbing of Predrag’s enthusiasm for Buk. His leg is a testament to his love of Bukowski's writing.

but at least the birds have gone quiet

shoemakers are
probably
jerking off on her shoes

if madness is happiness
than I’m happy
if it’s not
I’ll find something else
some happier kind of happiness
that will kill me more cunningly.

FALSE BOTTOM OF ABYSS
Joined together with saliva or with the thoughts about it
with voyeur neighbors or without them
with her holy Water and my ejaculations
with her illnesses
and my illnesses;

joined like dogs
while she’s convulsing her face in a tender grimace
while god curses our mothers
and she’s expecting an ejection
of her monthly maggot-
a handful of a bloody child
whose funeral I won't be attending ‘cause
she says: I’m not;

it won’t change a thing

while we're sleeping under the knife’s pillow
while she’s laying by my side,
and the furious sun is taking our peace once again
in order to replace it with something
let's call it-

Sun is coping now and then.
Clouds are going elsewhere.
Adam donated the rib.
One and one are still.
The one who knows how can still be amazed by people.
If it wasn’t so hard I too would be normal.
Some abuts their legs on the chair before they sit.
Dead friends drank their share.
I turn, I spin, the nightmares dream of me,
one by one.
I’m not yet fucked up enough to write better poetry,
but there’s time.
POINT 2

Maybe peeing on her piss is some sort of love.
I switch on the light – your light switches on.
Maybe there is something about relationships between people.
AntiMuse is expecting a child.
and I gave her:
heart on a palm,
shit in a hand
and bouquets of flowers
which she chewed up
in the corner.
I snorted a small house
and the sun.
It was a beautiful day.
Happy are the stories that have no end.
So let this one have it anyway.
Posted by BOLD MONKEY at 3:33 PM