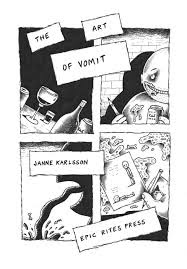 This is the latest insanity from the Swedish artist Janne Karlsson. The book contains 41 of his minimalistic sketches and most are centred on the theme of drinking alcohol and getting totally wasted. Karlsson’s humour is outrageously cheeky and mired in numerous images of his characters wallowing in their own vomit. 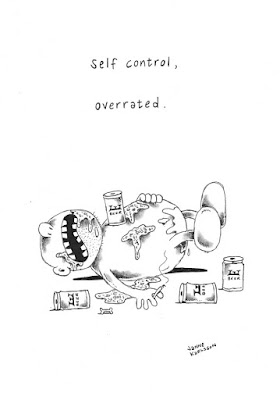 The book is not a celebration of drinking but rather of Karlsson taking the piss out of pissheads. He mocks a culture which lauds heavy drinking and which sees vomit as a badge of honour. His drunks are represented ironically as obnoxious, vain, foul-mouthed and deluded. In one sketch a female reader Tatiana asks Karlsson in a letter, “You’re a talented artist, so why this negative focusing on vomit, black-outs and misery?” Karlsson is explicit & terse in his reply, “Alcoholism isn’t pretty, baby. Get used to it!!”

The best sketches tend to consist of two panels. The first makes a matter-of-fact statement usually highlighting a benefit of alcohol. The second ironically exposes the human frailty of the remark. Here is a fine example: 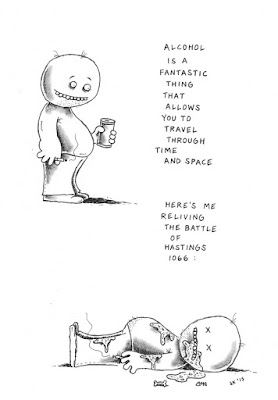 Karlsson also gently mocks his own drinking and appears to feature in many of his sketches as an artist who drinks to gain inspiration through oblivion. He humorously writes a series of letters to Jagermeister liqueur producers asking for a discount, a sponsorship deal and for a complimentary bottle for the mild nausea he experienced after consuming their product. 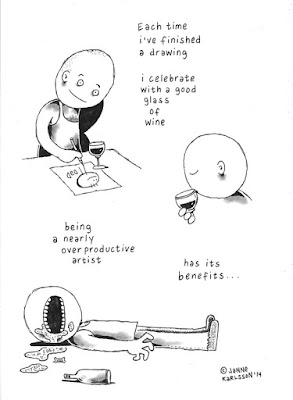 This is a confronting book in which the surface euphoric zest of a heavily drinking culture is thoroughly mocked and condemned. The following illustration is a strikingly accurate view of Australia & several other Western nations: 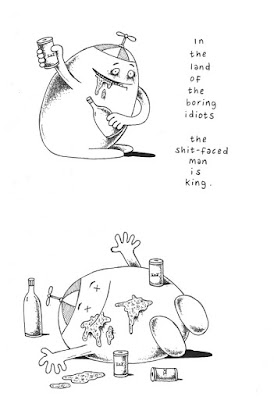 (all sketches above reprinted with the permission of the artist)