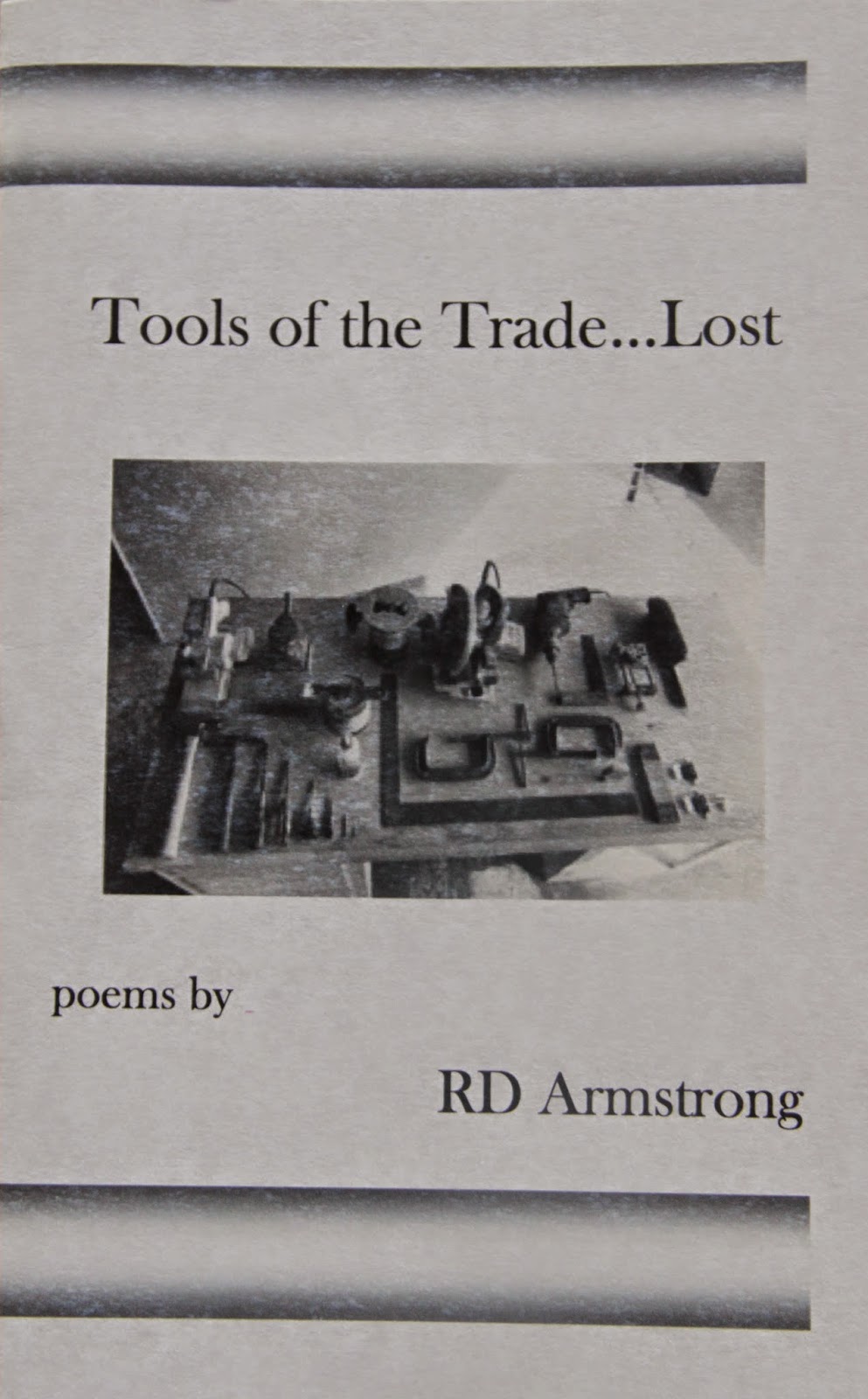 These are gritty, colloquial blue collar poems reeking of the sweat of hard physical labour and also of the fear & dangers of being on the job. The cover photograph is by the poet RD Armstrong & upon close examination reveals a parody of a circuit board. As the title of the chapbook suggests, the traditional manufacturing 'tools of the trade' which have built post war America have now largely been lost and have been replaced by a global technological market- which we know has suppressed wages & has seriously compromised job security.

The chapbook contains eleven poems, including ‘Post Hole Digger’ which was the winner of the 2014 Joe Hill Poetry Award. As is explained on the publishing details page, Joe Hill was a radical labor activist who was executed by firing squad in Utah in 1915 after copping a suspect murder conviction. The award is presented each year at the Great Labor Arts Exchange by The Heritage Foundation.

‘Post Hole Digger’ is broken into three parts and is interspersed with the other poems in the collection. In the opening stanza of Part 1, the speaker, presumably Armstrong, clearly establishes his working class creds by listing some of the tough, physically demanding work he has slaved at for over three decades & the many injuries he has sustained:

Part 1 is a kind of anthem to working class ideals- keep it simple: work hard, don’t expect great financial rewards and the notion that we cannot know where our chosen path will lead us. In contrast, Part 2 expresses a disillusionment with blue collar work and explicitly cautions the reader in the last stanza:

But, friend, unless you have
a fondness for the low road,
I suggest you leave now while
you can do it gracefully and
don’t trip on that bucket of
tools on your way out.

In Part 3, the speaker realises the limitations of his work and desires a way out to connect more fully to his creative side:

I knew then that I
didn’t want to die with
a hammer in my hand that I
wanted more that I
desired the creative path
that led beyond
my immediate locale.

As Armstrong mentions in his Afterward, 'Post Hole Digger' doesn’t fully represent Armstrong’s working life but it provides us with a clue as to why he established his small publishing company more than twenty years ago. As he writes in Part 3, he is still firmly committed to his literary journey:

Ten years later I am
nearer to but not
close enough to cease
my expectations.

The focus of many of the other poems in this chap is on the occupational hazards- both physical & psychological faced by low paid, manual labourers. In ‘Slice of Life’ the speaker graphically explores the lethal trajectory of a spinning blade, “without a cool precision/ fate punishes distraction.” In ‘Tank Farm’ a spark ignites a vapour which blows Lou, a fellow worker, in half. In ‘The Bastards  Are Waiting’ a paranoid worker rightly fears that everyone out there is trying to deprive him of his job. In ‘Building Blocks’ the speaker's obsessive preoccupation with  his job intrudes into his daily life to the extent that it deadens his imaginative thought & desire.

Armstrong isn’t making this shit up. As he says in the Afterward, “ I spent thirty plus years doing the manual labor dance. I had to stop eventually but I always figured it would be from DUI or heart attack or something cataclysmic…something terminal. But it wasn’t that at all, the damn body wore out but didn’t take the mind.”

Tools of the Trade...Lost is a short, solid collection well worth the read. Buy the chapbook here: http://www.kylelaws.com/33101.html

The sequence of poems in this chapbook first appeared in RD Armstrong’s Fire and Rain, Vols. 1
& 2 Lummox Press, 2008 and 2009 which can be purchased here: http://www.lummoxpress.com/lc/books-by-rd-armstrong/

For a recent list of writers published by Lummox Press books find it here: http://www.lummoxpress.com/lc/

Some Authors of books published by Lummox Press

Authors are from USA unless otherwise noted

These are just a few of the 100+ books, chapbooks, anthologies and zines Lummox has published in the last 21 years.
Posted by BOLD MONKEY at 9:49 PM