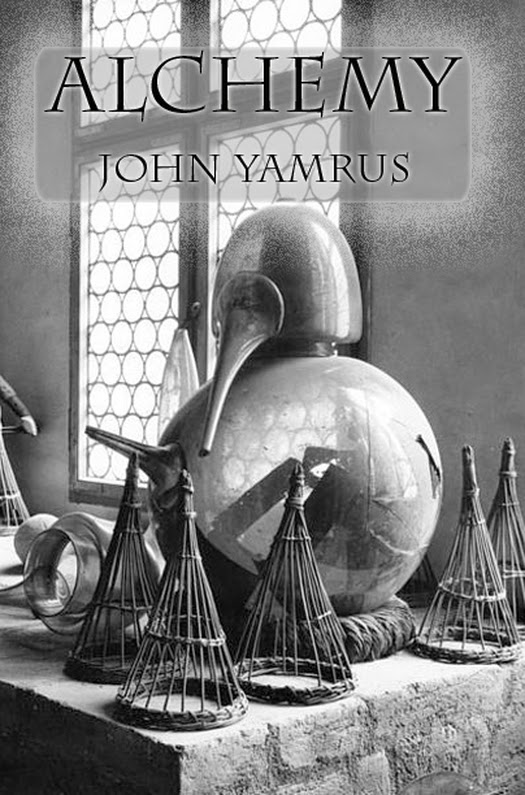 This is John Yamrus’s twenty-second book of poetry and his fifth published by the Canadian publisher Epic Rites Press. You quickly get the impression while reading this collection that Yamrus lives & breathes poetry. A solid core of the poems are about poetry but Yamrus takes his inspiration from anywhere- a headline in the local paper, a visit to a nursing home, trying to swat a fly, cleaning a pool, staring at the wrinkles in his face and the like.

Yamrus’s poetry always stems from the blood of his lived experiences. As he told BM in an earlier interview, “i try and write every day, but it doesn’t always happen, and the poems come from what’s happening around me. i don’t make stuff up. i’m not that smart. i see things… i write them down … and move on. i’m not one of those guys who thinks that being a writer is a big deal… all I do is hold up a mirror and hope.”

In reference to the title ALCHEMY, Yamrus recently noted, “Alchemy was the attempt to make gold out of base metals. This book was my attempt to make the same out of everyday subjects.”

ALCHEMY hits gold in several of the 118 poems in this collection- his largest since doing cartwheels on doomsday afternoon (2010). Many of the poems have previously appeared in about two dozen small publications, such as the iconic underground magazines- Gutter Eloquence, Florescent Stilts For Your Uncle, Beat the Dust, Lummox Journal and Zygote in My Coffee. The black & white exterior cover was created by Julie Michelle Sparenberg and the collection also includes fourteen full-page illustrations from the Swedish artist Janne Karlsson which skilfully complement Yamrus’s poetry. A sprawling introduction by Professor Mark Statman of Eugene Lang College links Yamrus’s poetry to that of Frank O’Hara, William Carlos Williams, Hans Shan, Ezra Pound, John Keats and others. I see Yamrus more as a one-off poet who has developed his own unique style.

Yamrus’s poetry is characteristically minimalistic. The guts of his writing have incrementally been filleted to the bone over the years. You won’t find much figurative language in his writing. Forget about extended metaphors or symbols or obscure allusions. Yamrus deliberately reduces language to its purest form. In an earlier review with BM, Yamrus argued that he wasn’t dumbing down the language and robbing it of its beauty and complexity, “what i’m doing…what i’m trying to do…is give the poem back to the reader. i want to get THEM involved in the process. like i said…i’m not very smart. i want their input, so i leave holes in my poems…holes that they can fill with their own ideas.” As with any skilful writer, when we read Yamrus, we are enjoying what he is saying about people and their relationships, but also as readers, we are also intuitively translating his words and creatively forming associations based on our own relationships and search to join the dots in our lives.

The poems characteristically are written in lower case, hug the left hand side of the page and are less than a page in length. Close to fifty poems are less than twenty words and you will also discover several micro poems. My favourites include:

the most unexpected thing
about beauty,

(reprinted with the poet's permission)

These are wise contemporary aphorisms and each of us can think of people who aptly fit these sayings.

Most of the poems in the collection are based on Yamrus’s personal anecdotes and reflections and the poems can be comfortably be read in one leisurely sitting. In a recent conversation with me, Yamrus explained how he assembled the order of the poems, “As for structure, i wanted to put together a volume that could subtly almost read as a novel, with each poem leading into the other.”

You will find a wide mixture of other poems in ALCHEMY, including some excellent portrait poems, usually about quirky, down & out people, such as, ‘jeremy’, ‘his work’, ‘for’, ‘she’, ‘everybody’s got’ and ‘tony’. There are also many solid poems about relationships- ‘tanya’, ‘i ain’t nothin’ and a few good love poems which Yamrus presumably wrote for his wife Kathy (who he dedicated this volume to), such as, ‘i love you’, ‘she keeps’, ‘i found’ and ‘i’ll’.

I find the most interesting poems in the selection are about Yamrus’s working life as a poet and his reflections on writing and poetry in general. His perceptions on writing, as on other issues, is always multi-faceted and need to be read in the context of his overall vision.

Yamrus’s offers many contrasting views on his own poetry.  In ‘this poem’s a mess’ the speaker of the poem, Yamrus derives a sly satisfaction in the notion that some readers think that his writing “violates/ every rule.” In ‘he said to me’ he agrees with a fellow writer that he’s “kinda glad/ our books don’t sell” because “we’d end up/ just like/ them,//  worrying what to/ write about.” In ‘Newman said’ he has a satiric dig at his own stuff:

you keep on
pushing.

it’s like that letter
you got the other day…

the one
where the guy said
reading one of your poems
was like walking thru dog crap.

they always
want it neat
and pretty
and safe.

but, i’ve been watching you.
that’s not what you do.
nothing’s off limits.
not even the crap.

he was a good enough guy,
but, I hoped to god
he wasn’t finally
catching on.

Yamrus also provides the reader with his views as to what makes a good poem. In ‘Jesus Christ’ Yamrus acknowledges “poetry/ isn’t about// perfection” … “it’s/ about/ taking that// corner/ on two wheels// and/ never/ looking back.” In ‘they all expect’ he says that good poetry “is all about/ surprises.// giving them/ something new.”

The opening poem in the collection ‘give me poetry’ serves as a clear manifesto for Yamrus’s best poetry and that of his contemporaries:

that’s new
that fails.
that makes mistakes.
give me poetry
that you don’t know
what in the world you need to name it.

give me poetry
that bleeds from the eyes

and
shouts at the world

give me poetry that stands naked and beaten,
with its back against the wall,
still screaming
I AM NOW!

Echoing some of his earlier work, Yamrus also cheekily but firmly sinks his boots into the rump of the literary establishment. In a series of playful, highly entertaining poems, he rails against poetry contests (‘don’t put me’), traditional verse forms (‘this poem’), writers’ festivals (‘it was another one of those’), pretentious poets (‘the famous poet’) and university professors- who are good at discussing literary theory but who do not have “any real heart or soul” in their own writing (‘they talk a good game…’).

Yamrus also pokes fun at struggling poets who attempt to write the stuff but who lack the talent to become enduring professional writers. He reads an anthology of small press poems and is disturbed by the sameness of the “bad-ass” shit (‘sitting in’). He scoffs at the internet poet in ‘when i said to Frankie’ who wants to post his work for free. He slams the “slumming god” poetess in ‘she could have been great’ who assumes she can write whatever she wishes without considering her audience. In ‘he said’ a fellow writer can’t understand why his poem- now 12 pages long- isn’t working. Yamrus does. In ‘he had no’ he criticises a writer who overly tinkers with his poetry, “sooner or later we all/ turn up like Michael Jackson, // face up/ and naked/ on an autopsy table. // and/ all those/ rewrites and/ changes won’t ever matter.” In the portrait poem ‘Hardy said’ Hardy gives up smoking, drinking, red meat- “everything” in the pursuit of his writing career. Ironically, the wry speaker concludes, “try/ as he might, / Hardy will never (ever) figure out// the only thing/ he really should give up.” This is shrewd, dark humour at its best.

In ALCHEMY John Yamrus continues to build on his already substantial body of work. This collection of poetry is vibrant, diverse and cohesive. He uses stark, deceptively simple language to distil his thoughts. As a modern day alchemist Yamrus seeks to transform his “base metal” of words into gold and he uses everyday incidents to fuel his craft. Yamrus has reached high and he reminds us all through his risky minimalistic poetry that there is an incredibly thin line between success and failure.