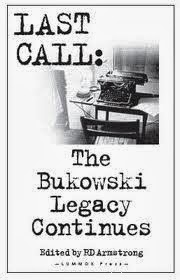 This is an interesting and diverse collection of poetry, short stories and essays related to Charles Bukowski’s continued influence on writers almost twenty years after his death in 1994. The book is a follow up to editor Armstrong’s LAST CALL: The Legacy of Charles Bukowski (Lummox, 2004).

As RD Armstrong clearly states in his introduction, the purpose of the collection is “to showcase writers whose work shows the influence, not necessarily in style or form, but in the feelings that their pieces (especially true of poetry) provoke in the reader (or in the editor)”.  He is interested, in particular, in the dark, “visceral quality” of Bukowski’s writing- how he is able to capture “the magic of ordinary moments” but also how he cuts “through the bullshit of life’s pretense like a laser through case-hardened steel”.

Bukowski’s enormous body of work refuses to go away and continues to sell tens of thousands of books each year. Armstrong metaphorically sees the strength of Bukowski’s work as rolling on “like an errant hubcap, released and hurtling towards the horizon, inspiring us to follow.”

Armstrong mentions in his forward ‘About this Book’ that he has been a tough task-master and has held fast to his definition of what he sees as Bukowski-esque- “namely writers of the solid, clean, and unpretentious line and not necessarily having to do with the Buk.”

This is the largest and best section of the book and consists of 47 tightly written poems by some of the best writers from the underground- Henry Denander, Charles Ries, John Dorsey, John Yamrus, Frank Reardon, Ben Smith, A.D. Winans, Doug Draime, William Taylor Jr., Gerald Locklin, Neeli Cherkovski and RD Armstrong & others. As you would expect in a collection of this sort, the poetry is raw, streetwise and highly accessible.

Many of the poems make an incidental reference to Bukowski. Others are tributes to Buk or are memoir poems like Cherkovski’s ‘Shostakovich Came to Visit’ and Gerald Nicosia’s ‘Fourth of July with the Buk in San Pedro.’ Other poems, such as Michael Lefanto ‘Forty Short’, F.N. Wrights ‘Bukowski & Me’ and Joy Buckley’s ‘Not Bukowski’ try to emulate Bukowski’s drunken & sexual exploits. Others focus on adapting various aspects of Bukowski’s no bullshit, free verse style. Rick Smith’s ‘We’ll All Go Together’ is an excellent example of an original writer borrowing from Bukowski but stamping his own extraordinary voice onto his work.

Bukowski’s poetry often exudes great warmth and humour and this aspect of his writing is often underplayed by his readers- but not by the Swedish poet Henry Denander in his poem ‘At the Racetrack’. Denander is a serious collector of Bukowski memorabilia. In the poem, unlike Bukowski, he is not interested in the horsetrack but buys some whiskey glasses on eBay because they are from a track that Buk used to attend frequently. At the end of the poem, Denander knocks back a glass or two of whiskey and cheekily quips as he starts to get pissed that he is “beginning to understand/ the art of horseracing/ after all.”

On eBay I bought four whiskey glasses from
Santa Anita Park; this was Charles Bukowski’s
favorite race track and he spent a lot of time there.

I’ve never betted on the horses myself but there was
a race track close to our summer house in Sweden
and I went there when I was a kid.

I never really liked to watch the horses run but
I came to see my uncle Allan who was a
regular at the track. I liked him a lot and he
always gave me money for ice cream,
so even without betting I came out ahead.

And now, 45 years later, here I am
with my large Santa Anita whiskey tumbler
with the engraved horses and jockeys,
a couple of ice cubes and a large splash
of Glenlivet whiskey.

Maybe I’m slowly
beginning to understand
the art of horseracing
after all.

Dorsey’s poem has a cut & paste feel to it. He combines Buk’s lower case free verse style, popular culture references and multiple allusions to Bukowski & his work to create a monster of a poem.

there is a junky born
every minute

Due to the paucity of quality submissions, this section is disappointingly short and only includes five short stories whose total length is about twenty-five pages. The content is full-on underground and explores such issues as assisted suicide, heroin use, work place harassment, teenage drinking and wife bashing. The language is gritty and often guttural in a go-fuck-yourself way.

Jason Harding’s ‘America the Beautiful’ is easily the strongest and most compelling of the lot. It is the tragic story of a woman symbolically called America who can no longer take the pressures of day to day living and asks her ex-boyfriend Maceo to kill her. What follows is a zany, unpredictable joy-ride for the reader.

This is a solid section of the book and includes a short buk memoir, a book review of Bukowski’s last poetry collection The Last Night of Earth Poems, a short reader’s tribute plus three essays.

In D.A. Pratt’s ‘Who Gets to Read Bukowski’ he suggests that new readers be strongly encouraged to read poetry Buk wrote during his life-time rather than the posthumous ECCO collections usually available in book stores. In his extended essay “Bukowski and the Romantic Influence: Writing as a Means of Transgression’ the French critic Alexandre Thiltges argues that Bukowski is a radical poet in the Wordsworth and Whitman tradition. This is an erudite study brimming with ideas.

More valuable to me was Abel Debritto’s ‘Atomic Scribblings from a Maniac Age: The Artwork of Charles Bukowski’ which concisely but comprehensibly provides an overview of the publication of Buk’s trademark drawings and doodles.

In 1965, for example, Bukowski began work on an unusual project he titled ‘Atomic Scribblings from a Maniac Age’ which was to be his “first book where his artwork would be predominantly showcased, with a few interspersed poems.” Bukowski sent Wayne Philpot, the editor of the little magazine Border dozens of drawings over several months. Promotional flyers, order forms were issued in late 1965, but the project had to aborted in 1966 when Philpot disappeared and pissed-off with Bukowski’s quality drawings- most of which have never been recovered. This is a remarkable, largely unknown story!

This is an enjoyable, tightly edited collection of diverse work well worth the read. There are many writers out there trying to out buk Bukowski but this is a sensible and spirited collection deeply grounded in the hard, clean line.

You can look inside Last Call through Amazon. This link includes a contents page, most of Armstrong’s introduction and four poems:
http://www.amazon.com/LAST-CALL-Bukowski-Legacy-Continues/dp/1929878869#reader_1929878869

Find a more extensive 50 page sampler of the book on ISSUU here:

Find here an excellent 2011 extended interview with RD Armstrong on HorrorSleezeTrash about his work as editor and writer: http://www.horrorsleazetrash.com/interviews/13-questions-with-rd-armstrong/