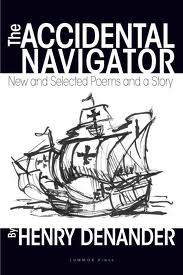 This book consists of 50 new poems, 37 selected poems from Denander’s previous collections and an unusual short story ‘The Poetry of Mr Blue’. These are mostly first person, free verse narrative poems highly influenced by Charles Bukowski and Gerald Locklin. Denander, 60, lives between his native Stockholm, Sweden and Hydra Island in Greece. He has been publishing poetry since 1999 and is the editor of Kamini Press, a small press publisher of fine books. http://kaminipress.com/

The poems in this collection are diverse in subject matter and almost all are narrated from Denander’s point of view. You will find poems about childhood reminiscences, dreams, chance encounters, his fascination with Charles Bukowski, his various health issues, amusing conversations with his wife and young son, his take on the writing of poetry and numerous reflections on musicians and their music.

As Denander explains in his poem ‘How to write a poem’: ‘I try to write about almost everything; // the weather or just making observations on/ people passing on the street or what goes on/ in my head while having a cup of coffee down at/ Café Merci on Horngatan.’ Further to this in ‘All my jobs’ he states explicitly that his overall intent is to write poems based on his memory of his ‘interesting’ real life experiences: ‘Three years ago I started to write poetry and now/ I try to remember what I have done all my life to/ see if there was anything interesting to write a poem/ about.’ Some of his poems about writing poetry, such as, ‘Waiting for the line’ and ‘7 AM at the Zeus hotel’ are self reflexive and engage the reader in the writer’s own process of creation. In the latter poem he wakes up early in the small town of Tolo in Greece and observes the delivery vans and the swimmers headed for the beach: ‘I have a notebook and the book on Mycenae, I/ drink coffee, pat the dog and write some stuff in/ my notebook.// Stuff like this.’

The writing is highly accessible and is characteristically delivered in a self –effacing, understated tone. Many of the poems, especially the new material, work towards a terse, often ironic punch line. In ‘Interview’, for example, his friend The Waffle reads in a long interview of Denander in an American poetry magazine that he has given up alcohol. Asked whether this was true, the poet answers: ‘Maybe this is the thing that will make me/ a famous poet?’ In ‘Nursing’ he explains to his wife and son his cytoscopic operation for his kidney stone. A long instrument is inserted through his penis to remove the stone. His son William innocently asks, ‘Did there really have to be two nurses to do that?’ In ‘The last stanza’ Denander receives a rejection letter from an editor who mentions that he ‘really liked’ one of his poems until the last stanza. The narrator concludes: ‘I liked the letter from the editor/ except his last stanza.’ This cheeky, humane humour is delivered deadpan and is refreshing to read in the ocean of pretentious, self-obsessed poets.

As briefly noted above, the poems often derive from fond recollections of personal or professional anecdotes. Denander worked as a financial manager for an independent Swedish record company and later ran his own business as a manager for Swedish artists for over ten years. Several of the poems provide Denander’s reflections on musicians who he has seen in concert or has had financial dealings with, such as Miles Davis, Freddie Hubbard, Dave Liebman,  Jimmy Cobb and others. One of the better poems in this category is ‘Patrons are requested to keep as quiet as possible during the artistes performance’ about Denander’s attendance at a Ronnie Scott concert at the Portobella Hotel in the Notting Hill area in London. After talking drunkingly to his friend Lars through most of the show, he chats with his client Chet Baker and other band members until six in the morning. The flute player complains about the noisy crowd but Denander doesn’t let on that ‘they were/ talking to/ the two loudest/ troublemakers/ in the/ audience.’

The poem ‘headache & a cup of coffee’ is a fine, representative example of Denander’s poetry:


(reprinted with the permission of the author)

The poem has a spontaneous feel to it and is driven through a free flow of associations, both past and present. It incorporates the clear first person/ free verse signature style of the poet and many of his central motifs- the centrality of music and family in his life, headaches, his dual Swedish/Greece lifestyle and his reflections on the writing process. Near the end of the poem he writes: ‘it started to snow again yesterday/ bad news/ now it’s five in the afternoon and/ still light outside/ I think the winter/ will slowly leave now// thinking about writing a poem about just nothing/ or perhaps about the things I have been doing today.’ He concludes with the ironic, self reflexive punch line: ‘I’ll think about it// we’ll see.’

In a very recent Rusty Truck interview (http://rustytruck.wordpress.com/2013/01/06/henry-denander-the-rusty-truck-interview/) Denander told Scott Young, ‘I don’t write much poetry these days.’ Instead  he appears to enjoy his day to day life without having to resort to the word: ‘a really good day is spent on a September day on Hydra Island in Greece with my family, writing some letters in the  morning, breakfast with figs from the garden, reading Murakami, siesta below the orange tree, painting some water colors or drawing with ink in  the afternoon, a swim from the cliffs when the sun is cooler and then some Kalamari at Dimitri’s tavern at night.’

He also says in the interview that the poetry of Charles Bukowski was the greatest influence on his art and writing, but that he never deliberately imitated him. Bukowski ‘opened up the poetry thing’ for Denander by making him see that there were no limits to what you could write about, ‘I have never tried to write like Bukowski. I have written about family and music and work and travels, it was just so refreshing that you could write about almost anything and find your own poem – as long as it has some rhythm and soul.'

Denander mentions in the Rusty Truck interview that he collects Bukowski memorabilia and has a signed copy of most of his first editions. ‘At the racetrack’, ‘A record and a letter,’ ‘The SASE’ and ‘Wormwood Review’ are all about Denander’s attempts to order Bukowski related stuff. In ‘The SASE’, for example, he discusses his prized framed Bukowski self-addressed envelope he bought on eBay and which now hangs framed on his wall. In ‘A record and a letter’ he narrates how in 1982 he received a Buk record direct from the legend & had later received a brief note from him after he had written Bukowski in a complimentary way about his second novel Factotum. Denander concludes the poem: ‘These things/ made me/ feel honoured in some/ strange way.’

Overall, this is a mature, highly readable collection in the Bukowski tradition. The writing is immediately accessible and focuses on memorable incidents in Henry Denander’s life. He provides inspiration to fledgling writers on how to shape their own experience into poetry. He writes about ordinary stuff in a clean, non bullshit way. Perhaps Denander has finished mining the narrative gold of his life and has written himself out. Time will tell.

Check out Henry Denander’s website where he features his poetry & artwork. He incredibly includes ninety-four of his poems many which appear in The Accidental Navigator or in his previous collections: http://www.henrydenander.com/

On the Lummox Press website find some blurbs and three poems from the collection: ‘It was like seeing a ghost walking the port at Hydra’, ‘Nursing’ and ‘At the Racetrack.’ http://www.lummoxpress.com/lummoxpress/denander.htm

For an example of his water colour paintings of jazz & blues musicians see ‘Miles Davis’ and ‘Blues for retirement’on Poetry Dispatch: http://poetrydispatch.wordpress.com/2009/04/30/henry-denander-6-poems-on-writing-writers-fatherhood-marriage-jazz-jazz-musicians-fame-much-more/

Find four poems from the collection ‘Beauty Sleep’, ‘The revenge of the couch potato’ ‘Accept your name’ and The SASE’ on Poet Hound here: http://www.amazon.com/The-Accidental-Navigator-Henry-Denander/dp/1929878885

Six p.m. Saturday Evening   It blows my mind to think of all of the Human lives with all of their own private Sorrows and joys, even in t... 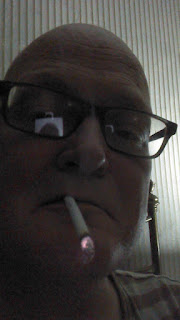