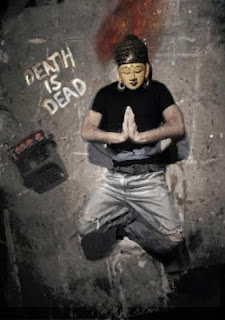 This is Rob Plath’s third full-length collection of poetry published by the highly innovative Epic Rites Press. Death is Dead is a fascinating, gut-wrenching auto-biographical account of Plath’s ongoing interior quest to discover meaning and hope as the walls close in around him. The main thrust of Plath’s tome is that he has given up the booze & smokes and has adopted  a simple, solitary existence. Through his monk-like path of intense personal introspection and fasting, he has learnt how to live with his inner demons, and has- for now- achieved an enlightened calmness. Due to the slimness of this volume, it is not as ambitious in scope as Plath’s previous two ERP collections, but it will certainly not disappoint readers familiar with his earlier writings.

The poems in Death is Dead are characteristically first person, confessional and free verse in style. The language is sliced to the bone, with only a few of the works exceeding fifty words. Several of the poems appeal directly to the reader and offer us pithy maxims blow-torched on the existential humanist idea that we are the masters of our own salvation. A central motif honed in early is how many of us live unexamined and passionless existences. In the powerful third person poem ‘awake at last’, a man suddenly wakes with a creative fount of music in his head: ‘it was very/ strange, this new thing. he felt awake at last.’ Yet his epiphany is short-lived and far too late.  As he ‘raised his/ hands like a triumphant symphony conductor’ he hits the ceiling of his coffin & tragically realizes he is dead & totally alone. The cautionary poem ‘unlived lines’ furthers the idea forwarded by Plath that we must live life to the max without fear: ‘don’t fear wrinkles/ upon yr face// they exist/ simply from living// rather fear/ the missing lines// from living not/ quite enough.’

In ‘doubling the weight’ Plath asks us to acknowledge the reality that we will all die and in the poem ‘too late’ to ‘live fiercely.’ In ‘don’t let it all go to dust’ he extends the point that we must wake up to ourselves and embrace life. The poet metaphorically posits that ‘we all sit/ kicking our legs over the side/ of our open grave.’ He asks us: are we going to ‘allow the beautiful visions’ sleeping in our ‘marrow/ to wake up’ or are we going to ‘jump into death’? Similarly, in the micro poem ‘the challenge’ he directly confronts the reader: be/ so/ awake&/ so/ alive/ that when/ yer/ time arrives/ Death/ will need/ two/ sickles/ to/ finally/ drag you/ away.’

These poems appear to embody Martin Heiddigger’s existential notion of Dasein- or existence. Simply stated, what distinguishes us from animals is our consciousness that we will one day die. Therefore, we have a responsibility to become fully aware of who we are and to confront our mortality, and the reality, that despite our relationships with others, we are essentially alone.

What makes this collection unique from Plath’s previous work is that at 41, he has given up ‘all his vices’ and is soberly confronting the black dog of his inner demons. His struggle against depression is wildly traumatic and fought internally day by day.  The poem ‘w/out feeling quite mad’ suggests that his suffering can emerge without cause, by ‘just peacefully sitting.’ It is only in rare moments that Plath experiences a reprieve, and it is always transitory. And it is only a matter of time as in the poem ‘thankful’ before the walls watching over him close in on him once again.

Several poems document Plath’s struggle to dull the intensity of his shrieking pain in the simple pleasures of life. In ‘the expert’ he is silently soothed by closely observing his cat throughout the day, in ‘sunday blues’ he curbs his blues by mirroring the ‘quietness of a cow’ & in contemplating Kahlil Gibran’s aphorism, ‘we won’t understand each other until we reduce the language to seven words.’ In ‘myth or no myth’ he rigorously fasts and as his ribs stick out he finds contentment: ‘as bones surface like/ undiscovered islands/ full of peace.’ In ‘my new tune’ he runs into an old drinking buddy & wants ‘to toss/ the weight of sobriety that i carry every second/ onto his shoulders’ but he remains vigilant: ‘on the way to my car, I ran my fingers/ up & down a row of my ribs/ while humming a victorious tune to myself.’

Rather than being trapped  ‘in the same black sack’ Plath has been ‘tied up in for forty-one years,’ he wakes up to ‘draw a blue cat/ & a red bird in love.’ Instead of being hungover and dwelling on thoughts of betrayal & suicide, he draws simple portraits of innocent animals, symbolic of his new lifestyle. Similarly, in ‘happy walls’ he writes that ‘i once lived at a residence/ made out of toe tags’ and how ‘I went quite mad there’: ‘now i live in a place//made out of/ red cats & blue dogs// the happy walls yap & mew/ & chase one another/ beneath a roof built/ of buddhas.’

In the metaphoric poem ‘unsaluting my past’ he writes how he has changed: ‘I’ve painted all my skulls/ bright yellow & bright blue/ & bright orange// you might even mistake/ them for balloons/ do I remember death?/ what the fuck is death?’ This latter idea is mirrored in the poem ‘don’t just cry for the dying man’ from which the collection’s title derives its name. In its stunning conclusion the speaker brazenly proclaims, if Nietzsche was right, ‘then we’d all be gods/ & we could shout, Death is Dead.’

Plath, of course, is not suggesting literally that death can be conquered rather that it can be transcended through people realizing there are no gods and that we ultimately control our own destinies. In ‘altho it may be in vain’ the speaker, presumably Plath, makes the suggestion that immortality can be achieved through the word:  While others are ‘doing sadly/ human things’ he will be ‘working w/the word’: ‘reaching, reaching/ past Bastard Death/ past Brother Nothingness// for something/ perhaps, like god.’ Like Bukowski, Plath’s ongoing search for meaning through his writing becomes an important therapy to help him ward off the mad barking dogs behind the door.

Towards the end of the collection there a few poems which metaphorically recount how Plath has learnt to ‘hug’ his demons and how he drinks ‘sweet chai or chamomile tea’ with them. In ‘at ease today’ he comments on how ‘so polite’ his demons are & as they drink their ‘steaming cups of tea’ he smiles & says ‘yr demons need love too.’  In ‘hug yr demons’ he writes: ‘don’t retreat/ or fight them-// hug yr demons// kiss each/ long, black/ splinter/ protruding/ from their/ screaming/ faces// & w/ bloody lips,/ smile.’ In ‘almost forty-two years old’ he says matter-of-factly: ‘i make tea for my/ company of demons. i refuse to let them be/ victorious. also, i don’t want to be known for/ murdering myself.’ More revealing, in ‘it takes guts’ Plath interesting comments that it feels ‘strange climbing into bed w/all yr senses & non-/ drunkenly facing the mute ninety degree walls… completely aware of the darkness & the demons/ whispering at the foot of the bed.’

Despite Plath’s apparent reconciliation with his darker sides, he rages against complacency and vows not to ignore his sorrow. In ‘whenever i realise’ he agonizingly states , ‘whenever i’m tricked into thinking i’ve put myself back/ together again/ whenever the mouth of my terrible wound quits/ silently screaming’ he vows to ‘curl up once more’ and inhabit his pain ‘inside the belly of absence.’ ‘Unsurrender’ is another threshold poem in which he grapples with the terror of existence. It reads much like a personal manifesto. In it Plath rails against ‘wanting to feel whole’, ‘wanting some level of safety’ in having a strong personal bond with another: ‘i’ll live each day w/this heart &/ this heart alone…who wants those other/ things anyway, that hushed peace that sucks yr blood/ like a massive spider? i want this solitary, shattered / savageness forever.’ In ‘blood in disguise’ he more comprehensively describes the ‘slim ledge’ on which he prefers to exist: ‘I don’t need anything: love, drugs, booze, smokes…i certainly don’t need yer/ fucking god who has never existed at all. I just need/ this slim ledge & this red fist flowering behind my ribs/ & the Word- which is actually eight pints of blood in/ disguise.’

Rob Plath’s poetry is inextricably linked to his own deeply wounded experiences. Death is Dead is a harrowing descent into the mind of a poet who is clinging to his sanity by the barest of fingernails. Yet Plath ultimately finds transformation in his extraordinary power to shape his dark instinctual thoughts and feelings into an enduring aesthetic. His poem ‘on this dark brink’ is an adept emblem to describe how his life & art have become fused as one. At its core, as in Plath’s own deeply considered living, the poem confronts the allusive, flawed, contradictory paradox of existence with a defiant, humanist glare: ‘never been/ more alone// never crazier// never more lost// never more awake.’

If you are interested, see my previous reviews of Rob Plath’s Epic Rites Press poetry collections on BOLD MONKEY:

a bellyful of anarchy (2009): http://georgedanderson.blogspot.com.au/2010/07/bbook-review-rob-plath-belly-full-of.html

there’s a fist dunked in blood (2010): http://georgedanderson.blogspot.com.au/2011/04/rob-plath-theres-fist-dunked-in-blood.html
Posted by BOLD MONKEY at 5:52 PM