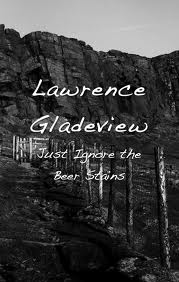 This is the first full-length collection of poetry by the 28 year-old Gladeview, who presently lives in Colorado with his wife Rebecca- who features in many of these poems. The 54 poems adopt a pared-down, lower case, minimalistic style highly reminiscent of the American poet John Yamrus. The poems are short narratives of less than 100 words and are characteristically geared towards making a dryly humorous personal or social observation about ordinary events- attending a funeral, visiting a chiropractor, ordering drinks, discussing poetry, picking up a hitchhiker and the like.

The PigeonBike Press typeface is bright and shiny and beautifully set-out. The cover includes a black & white cropped photo of a remote escarpment by the British photographer Leonne Bennett which evokes a raw, desolate feeling. In contrast, the title Just Ignore the Beer Stains is cheekily self-referential, asking the reader to ignore the poet’s ‘beer stains’, that is, his youthful imperfections- his purported romance with alcohol and the blemishes you might find in his early writings.

Most of the poems are written in first person from “Larry’s” point of view. The poems are often propelled by colloquial dialogue which reveal, through irony and understatement, the misunderstandings or quirky ways in which people attempt to communicate with each other. The collection is remarkably consistent in voice, subject matter and technique but a few of the poems stand out. Personal favourites include the terse car ad ‘Dad’s Classified’, ‘Thirsty & Forgetful’ about the speaker being asked to show his ID at a bar he has frequented for years, the metaphoric ‘Coming To Terms’ in which Larry likens his relationship to his woman to that of a cocker spaniel being dragged along a street, and ‘Poetry Needs To Be Natural’, in which the poet tongue-in-cheek expresses his poetics: ‘Poetry Needs To Be Natural/ not/ forced/ like the/ coat closet/ quickie/ before/ your auntie’s/ memorial.’

Overall, perhaps too many poems in the collection are about poetry or the writing process which creates the impression that Gladeview has lived thus far through the narrow prism of poetry rather than through hardened experience. As you read through his work you often sense the artifice, of Gladeview meta-fictionally mythologizing his relationship with his wife and his readers. And unlike Yamrus, don’t expect profound glimpses into the human condition. Gladeview is simply and unambiguously mapping out his first joyful steps of discovery. He has plenty of time to unbolt the veneer and express the misery and terror which awaits us all.

That said, it is certainly refreshing to read a new small-press poet who is not wallowing in a drug or alcoholic induced fog of self-loathing. Gladeview’s humour sometimes appears contrived but it can also be hugely appealing. And it is his candid, intimate tone which really makes this book sing.

An Interview with Lawrence Gladeview 27 February 2012

Bold Monkey: When did you first develop an interest in poetry and who were some of your early influences?

Lawrence Gladeview: I began to read poetry with the writing of Shel Silverstein. His poems share stories and characters through a genuine and humorous voice, something that I admire and influences my own writing.  My late college years were when I truly started to pay attention to poetry and began reading poets Yusef Komunyakaa, Amiri Baraka, Allen Ginsberg, Jack Kerouac, and Charles Bukowski.  It wasn’t until a few years after college that I really put a pound of flesh into poetry, began to grow as a writer, and introduce myself to more underground poets like John Macker, Michael Adams, John Yamrus, Todd Moore; and gals like Ann Menebroker, Puma Perl, and Lyn Lifshin.

Bold Monkey: According to your web page: http://lawrencegladeview.com/ you started publishing your poetry in 2009. Can you briefly recount the events leading up to your decision to finally submit your work in 2009?

Gladeview: At the time I started submitting my writing to publications, I was sharing my poems with friends and workshopping pieces online.  From there it turned into mailing out poems in an SASE, submitting electronically, and posting pieces to my now defunct Righteous Rightings blog.  Over the past few years I have been very lucky to have my poems featured here and there in print and online, but the fire burns most when those rejection slips find their way into my mailbox and makes me punch the keys harder.

Bold Monkey: You graduated from James Madison University with a degree in English. I’m curious as to what you studied there, especially the texts, lessons and experiences which may have stimulated you to write.

Gladeview: Most of my study at James Madison focused on African American literary genres and Eastern European authors, although here and there I would have a Period American Poetry class or Writing Composition workshop.  But the single most explosive experience of my college years was attending the Furious Flower Poetry Conference held on campus in 2004.  The conference featured the most illuminating, contemporary African American voices in poetry including Amiri Baraka, Nikki Giovanni, Yusef Komunyakaa, and Gwendolyn Brooks among others.

Bold Monkey: I recall reading somewhere that you arrived late to ‘underground’ poetry. Why the interest and what magazines and writers first appealed to you and why?

Gladeview: Underground poetry has no rules, says something authentic, and above all makes the reader react.  Billy Collins reads up on a stage behind a pulpit using vocabulary no one understands to describe something that’s already been said. Meanwhile, Tony Moffeit is taking up at a local poetry reading wearing leather pants with a snakeskin belt, wielding a harmonica and singing the blues.

Bold Monkey: There are thousands of magazines out there. What are a few that showcase the type of poetry you enjoy reading? What specific qualities do they have which draw you in?

Gladeview: PigeonBike, Epic Rites, and Lummox Press are three publishers that do a great job printing high quality writing from diverse poets and artists.  The time and dedication these guys put into their projects shows in the product; who wouldn’t want their poems featured in a publication like that?  Their authors are provocative and unapologetic, writing addictive poems and stories that deliver the goods on authentic human sentiment.

Bold Monkey: Can you discuss your initial involvement with PigeonBike Press and your subsequent dealings with the editor R.L. Raymond in the publication of Just Ignore the Beer Stains?

Gladeview: Rob approached me about possibly doing a book last summer and I immediately jumped on it.  I had been featured in a few PigeonBike magazines and was familiar with Rob’s commitment to print publishing and featuring the very best.  From then on we started to get together a manuscript of poems, paying close attention to order and trimming the fat.  By late November, Just Ignore The Beer Stains was available for purchase and the final product could not be more well constructed.  Rob never compromised in the process of putting out this collection and it shows.

Bold Monkey: I have read many of your earlier poems in which you adopt a wide range of forms and styles- some which are quite sophisticated and experimental. The obvious question is- Why do you adopt throughout Beer Stains a pared down, minimalistic style, highly reminiscent of John Yamrus’s?

Gladeview:  I have been writing for over five years now, and over that time I have been finding my voice and solidifying my identity as a writer, and that growth comes from pocket haikus, bourbon narratives, and travel lodge tales.  John has been a great supporter of my poetry the past year and has always been kind in offering his feedback and advice.  Just Ignore The Beer Stains is a collection of poems smart-ass in attitude, humorous in behavior, and aged in a bottle.

Bold Monkey: What’s next for you?

Gladeview:  I have a few poems selected for publication in PigeonBike and Epic Rites projects coming out this year that I am very excited about.  I also have a couple of readings planned around the Boulder and Longmont, Colorado area this spring and summer.

Bold Monkey: Lawrence, thanks for taking the time to answer my questions and to let me enter your world.

Gladeview:  I just want to thank you again for your dedicated approach to this review, I cannot express my thanks enough.  Look forward to continued fantastic reading on Bold Monkey and will be sure to keep in touch! Cheers.