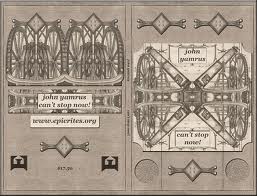 This is the second John Yamrus book of poetry published by EPIC RITES PRESS and consists of sixty-five lower case, minimalistic poems. Rather than tackle the larger issues and make grand statements about ‘Love, Death, or Life,’ Yamrus prefers to ‘keep it real’ by writing about the seemingly insignificant things- ‘the deathly horrors’- that confront us ‘every single day.’ The writing is incredibly simple but embedded with a homespun wisdom which the poet has crafted over the forty years of his publishing life.

The title can’t stop now! is an obvious reference to Yamrus’s life-long compulsion to write. This is his eighteenth book of poetry and there’s no way he is going to stop writing now. As the poem ‘it’s too late’ infers, poetry should have been belted out of him when he was ‘young and soft,’ but he’s ‘old and tough now.’ Although not noticeable at first, the intricate sketches by Pablo Vision on the book’s front and back covers also reinforce this idea. The sketches are of a 17th century ‘perpetual motion machine.’

In can’t stop now! Yamrus returns to his well-trodden themes of growing old, writing poetry, relationships, Bukowski and death. His portraits of incompetent wannabe writers (‘he had this thing’, ‘his writing’, ‘he says to me’, ‘he wanted everyone’, ‘he said he was a writer’, ‘he looked at me and’ ‘on reading some of’) and of failed men (‘Henry always’, ‘Tony wasn’t very’, ‘Murray knew he’, are particularly fascinating to read. In contrast, Yamrus represents himself as a self-assured, self-effacive individual who is not caught up in the messy problems of the world.

Yamrus creates an intimate relationship with his readers by directly speaking to them in a friendly, light-hearted way. He reveals to us his inner most thoughts and feelings on the most personal of matters, including his relationship to his wife and the secrets to his success as a writer. His tone is often cheeky and he relies on simple puns, black humor and dramatic irony to win his readers over.

In a recent excellent interview on the BCTV program New Arts Alive http://www.bctv.org/special_reports/arts/new-arts-alive/vmix_f6540ffa-21ba-11e1-a895-001871e3ce6c.html?success=1 Yamrus, referring to his pared down style, states that, ‘the hardest thing for a writer is to learn what not to say.’ Rather than hitting his readers over the head by including every specific detail, he allows the readers to fill in their own gaps, to put their own spin on his words.

Can’t stop now! is a book which can easily be devoured in an hour. Many of the poems appear lightweight, or have an aura of self-contentment and work towards a feel-good ending. Some of the better poems juxtapose humour with hints of the grimmer reality which lurks under everything we do. In ‘Tony wasn’t very’ Tony is depicted as an average Joe ‘who likes baseball/ a good glass of wine.’ The tragedy lies in the speaker’s inability to see his suicide coming. In ‘object lesson’ the speaker states when looking into the mirror, it is best to overlook one’s advancing age and watch out for what really matters: ‘that look of/ fear,// and resignation.// even/ terror’ at the threshold moment when we fathom our own mortality. In ‘he died’ he contrasts stock images of the dead ‘with a tube/ in his nose’ with the quirky but menacing observation of a foot ‘stuck out/ from under the covers’ ‘his nails/ needed a trim.’ ‘He kept her picture’ is about a guy who keeps in his drawer for forty years a picture of a former lover. The poem is an excellent study in false hope and self delusion. ‘That’s not a dick’ is another memorable poem about physical decline and sexual impotence.

Despite the slashed down, almost inarticulate feel to the collection, Yamrus miraculously pulls it off. He seamlessly surfs the boundary between humour and despair. Yamrus is a highly engaging writer who really gives a shit about his readers. In the simplicity of his language he opens up huge spaces for the reader to interpret his work. These are clever meta-fictional poems which ironically work from the noble principle that they are real.

The original New Press Release for the book from Epic Rites Press can be found here:
http://www.epicrites.org/uploads/4/7/9/8/4798714/press_release_-_cant_stop_now_-_mla_version.pdf 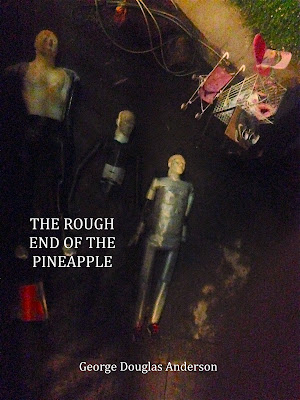