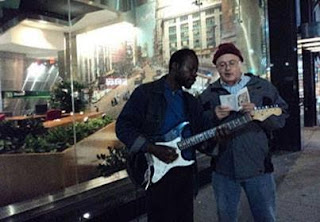 The nickel sized spider lived between the double storm windows and outer window. Fierce winters required three panes of glass. The spider was yellowish black with reddish gray stripes on its barber pole like legs. It couldn’t get inside, I pointed that out to Paola, it was in our second-floor bedroom. Petunia the cat loved to peer out the window to watch the spider and the birds and squirrels. I called the spider Boris. It spun a beautiful web, I tried to get it out three times with a bent coat hanger. Boris hid and came back after each attempt. It had a marvelous iridescent web that reflected the sunlight perfectly. It was completely stocked with a plethora of food. Two green aphids, a fat mosquito, a copper centipede, an ant, and some alien looking beetles. One morning I took some wire and jammed it between the windows, breaking and bloodying a fingernail and knuckle, but Boris was gone. Paola saw it and screamed are you getting outsmarted by a spider. I took out the three panes of window and screen, I had Paola hold an old shower curtain over the window. I took a garden hose and blasted water up there. I told Paola it has to be washed away, she watched as I started reassembling the window. It was far from easy balancing the heavy glass in the wet metal window tracks. Here comes wet Boris, mad as hell landing on the back of my hand running up my shirt. I slam my chest into the wall, while juggling three panes of glass. Paola screams, I thought I killed Boris. The windows slams down on the backs of my hands, like a guillotine. One hand soon looks like raw hamburger someone beat with a meat hammer and an artery is swollen like a blue worm. The other hand looks like it’s been slammed in Cadillac door. I think both my hands have black eyes. Paola got me some ice and said, “At least you killed that ugly ass spider.” I didn’t tell her Boris had moved into my closet.

“Hey Fish, thanks for not ratting me out.” I thought it was a dream or those funky tacos I had washed down with Mad Dog the night before.
The voice was kind of squeaky like a cartoon character, maybe Bugs Bunny.
“Call me Mr. Boris. I’ll only speak to you when I feel like it.”
The spider took a couple of flexed jumps on its web like a trampoline and then did some flips. “Don’t go insane on me human. I can help you write, just take me outside to catch some juicy insects.”
“Okay Mr. Boris, show me what you have.”
“Red necks in the chicken coop
making cackle whoop whoop

His mama was a cougar
he liked to eat his boogers

Chocolate man was a nigerette
he rolled a marijuana cigarette

“That’s enough Mr. Boris, your rhymes are so bad you’ll get my ass kicked for sure. I’ll burn bridges north and west, I’ll have to carry a derringer in my vest.”
“Not too shabby, Fisherman.”

He low crawled to the top of the sand dune and stared down at the oasis. Five nomads were watering their livestock. Nappy kept his rifle scope trained on each of them and shifted his hand grenades to a more comfortable position. He signaled to Qadr and she disappeared down the trail to where Nahla was guarding their animals. Most nomads were honest, but there were rumors of bands of thieves roaming this area. He’d learned long ago the best ways to stay alive. The five men left the oasis, headed east. Waiting until it was safe, Nappy’s entourage approached.
Nappy relaxed during the hot afternoon. The palm trees yielded shimmering shadows over the refreshing cool oasis. Sand dunes and mirage visions fought wars across the vast oceans of desert as far as you could see. His only wife, Qadr, who’s name meant fate, he’d met while living among the Blue Men of the Tuareg Tribe. Her beauty was unsurpassed. Nappy loved her so much, it frightened him at times.  She had only one servant, Nahla, which meant a drink of water. Often Nahla had found water for them and their camels, goats, and sheep, when they became thirsty on their journey.
Abdullah, Nappy’s Bedouin friend could not believe he’d wanted only one wife, when he could’ve had many or a harem of beauties. Nappy was excellent at raising livestock and racing camels. He could’ve been wealthy in gold, instead he was a seeker of knowledge. They watered their stock, then made camp a few miles away from the water. Where there was water in the desert, there was danger. Something woke Nappy, it wasn’t a sound exactly, it was more like a feeling of dread. Something was amiss. One camel and Nahla had vanished, she was on guard duty. Qadr and Nahla were always armed to the teeth. Nappy pursued the tracks leading toward the oasis.
The five nomads were taking turns raping his camel. Nahla was hiding, invisible to all, but Nappy. For men to hurt animals was unthinkable, it was a crime against God. Nappy was enraged, he became a monster killing machine. He waded into them like the devil incarnate. Bones were broken, heads and limbs were separated from torsos, blood soaked deep black into the sand. The camel trampled the last man to death. Nahla had seen Nappy in battle and knew enough to keep out of his way. She kept her rifle trained on the ferocious melee, in case her assistance was required. She filled a bucket of water for Nappy to wash in.
Nappy helped Nahla drag the corpses away from the water. The desert was quiet as the red orange sun peered above the sand dunes. Spotted hyenas were ready to feast, vultures circled above.

Chasing broncos, ghosts, and ladies through the night

A guy ticks off his mama, she beats him in the head with
a toaster then puts his penis in, plugs it in and clicks
it down to bagel setting.

The Biggest Joke is Death

there is even some sex, but never
enough just a toe dip into the river,
shackled by my years, gravity sucking
my energy, the sky and ceilings piss
on my head, the walls yawn in boredom,
nobody laughs at the ugly motherfucker.

Even Death Can Make a Mistake

Love is a black baby dying of starvation

Love is a palomino stallion falling
into the Grand Canyon

There is no such thing as love.

Bio: Catfish McDaris’ most infamous chapbook is Prying with Jack Micheline and Charles Bukowski. His best readings were in Paris at the Shakespeare and Co. Bookstore and with Jimmy"the ghost of Hendrix"Spencer in NYC on 42nd St. He’s done over 25 chaps in the last 25 years. He’s been in the New York Quarterly, Slipstream, Pearl, Main St. Rag, Café Review, Chiron Review, Zen Tattoo, Wormwood Review, Great Weather For Media, Silver Birch Press, and Graffiti and been nominated for 15 Pushcarts, Best of Net in 2010, 2013, 2014, 2016, and 2017 he won the Uprising Award in 1999, and won the Flash Fiction Contest judged by the U.S. Poet Laureate in 2009. He was in the Louisiana Review, George Mason Univ. Press, and New Coin from Rhodes Univ. in South Africa. He’s recently been translated into Spanish, French, Polish, Swedish, Arabic, Bengali, Mandarin, Yoruba, Tagalog, and Esperanto. His 25 years of published material is in the Special Archives Collection at Marquette Univ. in Milwaukee, Wisconsin. Bukowski’s Indian pal Dave Reeve, editor of Zen Tattoo gave Catfish McDaris his name when he spoke of wanting to quit the post office and start a catfish farm. He spent a summer shark fishing in the Sea of Cortez, built adobe houses, tamed wild horses around the Grand Canyon, worked in a zinc smelter in the panhandle of Texas, and painted flag poles in the wind. He ended at the post office in Milwaukee.
Posted by BOLD MONKEY at 3:59 PM