Sanjeev Sethi is a Mumbai poet. Asked what the poetry scene in India is like he replied, “A one word answer, vibrant. But it isn’t a monolith. Poetry in India is made up of myriad languages and each language has its canon. For the purpose of this discussion I will restrict myself to poetry written in English by Indians. This is a robust community of earnest practitioners. With the advent of the internet  it really is a global poetic guild. In such a scenario western or eastern are dated concepts.” 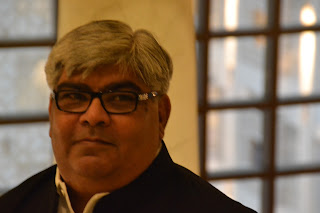 Freckled by fate I’m a sock puppet of concupiscence.
When the mind wishes to wank it begins to box: you
and your possibilities. It is the nature of spinnakers
to showboat. Some songs play loud. Were your signals
irresolute? Did I misread? Through maw of memory
regions rich in your residue are ossifying. When one
stocks one blocks: science of countervailing. Regimes
of pattern  have played their part. You possess hauteur
as one privy to my plot, albeit you’ve chosen not to
douse it in diction of bad faith.

Rampikes on the ridge unleash acquaintanceship
with lived experience: I wished to be a rosarian,
ash animates the breathless. Monorail of memory
urges me to carve a station with the argil of your
essence. I refrain, channeling you to rosaries I
never ornamented.

On the lattice of my attic your lines reverberate.
They hop on the heart and rattle it like a sistrum.
In its signature tune lodges our lyric.

Peradventure isn’t for the past. It does what
it’s supposed to and cotches on one’s karmic
lounge primed for Big Daddy’s piñata.

The cerate of completion has its own calm
like fondling a nummular rim. Chagrin takes
over only when one spoons your stretch.

Decibels exhaust their edge when the mind
superintends the self. On uneven days even
wheeze makes one uneasy. Invisible bankits
animate inner conflicts neither accepted nor
articulated. Lightheartedness by peaceniks
remedy for a while until verities paratroop
their way to combat theatres. Arrayed in
rouge fatigues, estimates fail to ignite.

Pestiferous extortion is best abandoned.
Urge is to move with flawless momentum.
Walloped feelings have no way to reach
if refrained from flowing. Splinters of truth
are splayed on texts, perused in far-off posts.
Can words recoup the hollowness of hying? 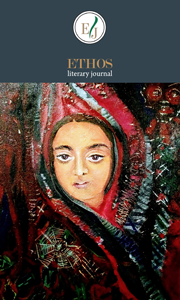 Sanjeev Sethi is the Featured Poet in the latest edition of Ethos Literary Journal (November 2018). Find an interview with Sanjeev, a review of his latest book and six of his poems here: http://ethosliterary.org/category/november-2018/featured-poet

Sanjeev Sethi is the author of three books of poetry. His most recent collection is This Summer and That Summer (Bloomsbury, 2015). A Best of the Net 2017 nominee, his poems are in venues around the world: Stickman Review, Neologism Poetry Journal, Olentangy Review, Home Planet News, Angry Old Man Magazine, The Stray Branch, Cholla Needles, Ann Arbor Review, Empty Mirror, Peacock Journal, Morphrog 16, Communion Arts Journal, and elsewhere. He lives in Mumbai, India.