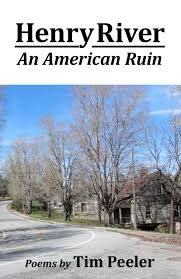 This collection by the American poet, Tim Peeler, consists of thirty-nine free verse poems about Henry River, a ghost town in the foothills of the Blue Ridge Mountains in North Carolina. The model town built in 1904 was abandoned when the company mill, which manufactured fine cotton yard, went bust in 1973 and was eventually set alight in 1977.

According to Wikipedia, the community of Henry River was designed and built by Michael Erastus Rudisill and others and included a mill, dam, general store and 35 two-storey worker’s cottages, 21 of which are still standing today on the river’s northern bank in Burke County. In 2011 there was a renewed interest in the town when the decaying village was used as the set for the first of the post-apocalyptic Hunger Games films. 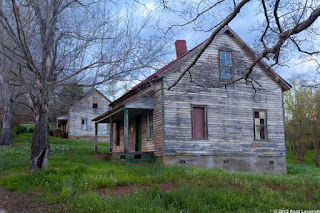 In his opening Note from the Author, Peeler clearly explains the origins and intent of his collection: “The poems in this volume reflect on the historical Henry River with some reference to the intrusive forces of the film industry. Some are responses to photographs; others are based on stories that Henry River natives have shared with me, while some are sheer flights of fancy. All of them share an empathy and reverence for those who lived and worked in Henry River.”

The poems do not have distinct titles but are simply numbered ‘Henry River 1’ to ‘Henry River 38’. The concluding poem is entitled ‘Henry River, 2014’. The poems adopt a variety of third person perspectives, mainly the critical eye of Peeler as a commentator on the sad passing of the microcosmic American small town and the recollections of Henry River inhabitants- their hopes and joys and fears, when the mill was fully operational. 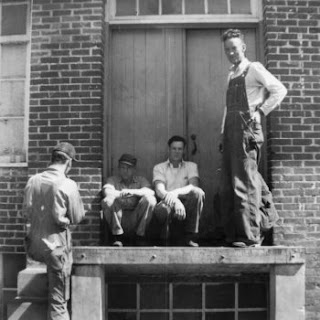 Apart from the bookended first and last poems, the sense of past and present and perspective have been shuffled by Peeler throughout this collection. Sharp emotive musings of life in the vibrant community are intermingled with the poet's closely observed photographs of people and places from the past, together with his derisory commentary on the invasive film crew and the do-gooders on Facebook who now want to save these “ruined houses.” The individual poems are easy to read and each broadens our understanding of how Henry River is viewed through “the slow sledgehammer of time”. 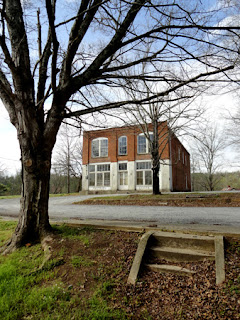 In ‘Henry 1’ the narrator, presumably Tim Peeler, sets the tone of the collection by highlighting how the film crew of Hunger Games has disrupted the long dead mill town and has released its ghosts:

He knew in his gut they were disturbing the ghosts,
Stomping around on broken porches,
Building a set in the company store,
Slowing the local traffic, and now
There were rumors they would blow up one
Of the houses. He thought about Erastus Rudisill
Designing the dam, the first bridge,
Laying out the mill and all those lives
Of labor, back breaking hours
Still better than drought-stricken farms
Till the mill burned thirty-five years ago,
And houses that never had running water
Became emptied tombs, and now
A stage for post-apocalyptic
Movie scenes, and he sensed the disturbance
As if his own nerves lined
Plank walls, open skull windows,
Outhouses and pump handles,
Doors swung wide open forever.

(the poem has been reprinted with the permission of the publisher)

In the Henry River poems which follow, Peeler unleashes a panoply of voices from the former residents of the small community. The folks are not identified by name and Peeler's focus is on the nuanced, every day activities and feelings of the people, and always with the sound and unceasing rhythm of the river's "flowery fist" amongst them. In the memorable poem ‘Henry River 30’, he describes how the river has immersed the locals on many levels. They were baptised in the river and it became the source of much childhood play. After swimming to the far side of a pond, the persona listens to the mill and the crickets:

And there was a rhythm
In the heat and the night
And the water splashing
Against the dam,
The turbines and the looms,
And it lulled you into the kind
Of sadness children feel
But have no name for. 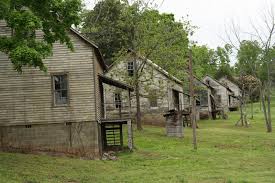 Peeler often contrasts the decay of the buildings with the fond, time honoured memories of the residents and their shared sense of community. Although the quaint mill had been discarded decades ago there are those who still grieve its loss:

But there are still those who know
The life that was here, for whom
Those days are but a blink away
From these, and walking the
Cracked sidewalks one can feel
Their grief sliding in the shadows;
In the green pulse of the grass,
Their roots clinging. 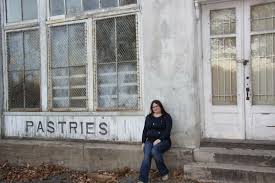 Peeler’s images and observations of the village are realistic but sometimes nostalgic. As he observes tourists posing for photos in front of the Pastries sign outside the general store which appeared in the film, he writes, “how blurry the line/ Between the grimly real/ And the grimly romantic.” (‘Henry River 31’)

Peeler, famous for his baseball poems, includes several references to the game in this collection. In one of the early poems, he refers to the “nicknamed boys in overalls/ Because baseball players/ And race car drivers all had one, (HR 3) and in another, he describes the children “Like ghosts in the dusk/ At the ball field/ Catching fireflies/ In the chipped jelly jars/ Till Mommas called/ From one bulb porches/ Up and down the hill” (HR10).

There are also descriptions of fathers snoring “Worn out from a day at the mill,/ With a paper in his lap on the porch/ His work shoes propped against the door’ (HR 2), of “gapped toothed boys in overalls/ sit with cane poles on the north bank/…Free as Huckleberry Finn… Just to dream like cork floats/ in the green summer shadows (HR14), of the blind keeper of the general store who “recognized his customers/ By the memorized pattern of their footsteps.” (HR27) & of sharing cold baths with visiting cousins after fishing in the river (HR 29).

Yet Peeler cleverly juxtaposes these comfortable, complacent images through his use of time shifts and alternating voices to reveal a fractured America during the Cold War. The small town, despite its idealistic intentions and amenities displays inequalities of wealth, domestic violence and suicide. With work at the mill slowing, the young hear the news about the Vietnam war and the protest marches (HR12) and many are lured by “the highway out of town” (HR 8,17).

Peeler makes it clear that Henry River is representative of many small post World War 2 towns scattered across America when he writes in Henry River 3, “Could be any mill hill/ In the black and white fifties.” But Peeler poetry is apolitical. He is more interested in imagining a social past, than say, in explaining the economics as to why the mill collapsed in the late 1960s, when at it peak, up to 12,000 spindles were churning out fine combed yarn for lace. My guess is that the demand for lace bottomed out when cheap cotton imports started arriving. To simplify matters, he states that the mill burnt down but this was years after the mill and equipment had been moth-balled.

Another mute criticism is that Muller never takes us into the heart of the factory to stand beside the men and watch them at work. The hum of the mill is a constant for the residents of Henry River, but as readers, we are never allowed entry to its mysteries.

In the last poem in the collection ‘Henry River, 2014’ Peeler takes a swipe at the film crew of The Hunger Games, which appears to have inspired this book, and the crowds of tourists and “meth head vandals” who have been attracted to the village after the release of the film. Peeler believes "the village is done" and should be left alone. He scathingly concludes:


Now it is an American ruin,
Photographers skulking
Between busted frame rentals
As if they are first to imagine
Art in unchecked entropy;
In the wee night, meth head
Vandals gathering in flash lit
Cobwebbed living room spaces
For glass pipe blue flames,
Then sledge hammering
Porch posts into weedy yards
Because history has always
Stood in the way of rebellion,
However meaningless.

Henry River: An American Ruin is a unique and deeply thought through collection of poetry. It wonderfully evokes the lost spirit of an abandoned American village and the scavengers who now pick its bones clean. 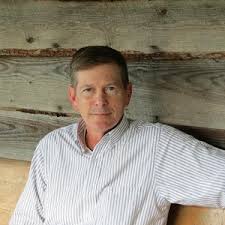 Tim, when did you first develop an interest in poetry and who were some of your early influences?

Thanks Tim for your time.

A short article on the town: http://www.atlasobscura.com/places/abandoned-henry-river-mill-village 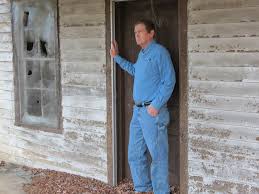 Tim Peeler Bio: A past winner of the Jim Harrison Award for contributions to baseball literature, he has also been a Casey Award Finalist and a finalist for the SIBA Award. He lives with his wife Penny in Hickory, North Carolina, where he directs the academic assistance programs at Catawba Valley Community College. He has written 13 books and this is his third chapbook.
Posted by BOLD MONKEY at 11:40 AM