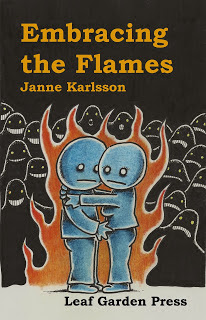 Embracing the Flames is the Swedish illustrator, Janne Karlsson’s latest book. It consists of 63 self-contained sketches which characteristically castrate mainstream cultural norms. Karlsson’s bleak landscapes are littered with dead trees, piles of human skulls, nooses and bottles of booze. There are “sick bastards” going nowhere & losers searching for unanswerable questions. Like us, they live in a world where religion is phoney & hateful and death is always only a heartbeat or two away.

The title poem is ironic in that it reveals an intensely vulnerable side to the artist. The first three captions boldly state, “We were born to embrace the flames, to kiss the fire, to eat the torch.” Instead of leaping headlong into “the fire” our hero Janne is later to be seen as prostrate, unable to move. He concedes, “I don’t burn very well without you honey. I don’t burn at all.” 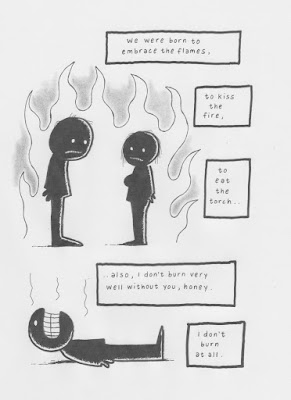 Karlsson was born to create and his work has a rapid-fire, spontaneous feel to it. In the interview which follows, Karlsson says he works quickly & without much revision. He has a strong, intuitive feeling especially when the job is done, “If the ‘feel’ of the piece is right, then the drawing is right too.” He further reckons, “everything looks better when you keep it simple. Also, the older I get, the more impatient I become. I need to make it fast and get onto the next project.” 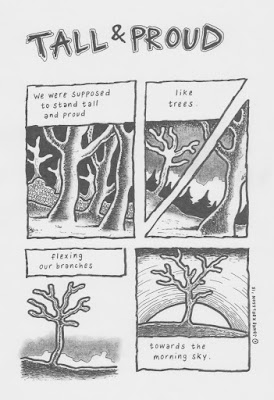 This manic fury to get it down & then to move on means Karlsson’s work is continuous. He simply creates without too much intellectualising about it. Consequently, his art is usually piece-meal rather than a longer sustained activity.

Although these pieces are largely independent of each other, Karlsson explores many common themes throughout: the failure of relationships, solitude, depression, pain & the possibility of redemption.

Karlsson’s work is edgy & extremely varied in subject matter. Sometimes his art expresses a gritty sense of triumphantalism, yet in the next panel or two, you might feel a deflated, gob-smacked melancholia.You might laugh yourself stupidly over several pages & then you might get an uncertain, creeping sense that the composer’s walls are only loosely flailed together by some dodgy sticky tape. 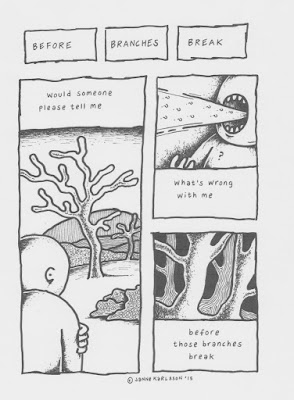 (all illustrations reprinted with the approval of the artist)

This is a mature, independent series of surreal drawings by Karlsson. He presents a fascinating world of characters who are essentially in search of love & meaning. Yet the people he portrays are largely seen as trapped by personal deficiencies and larger inexplicable cultural & political forces. Karlsson transcends these boundaries thru his skill at consistently illustrating how badly people are fucked up. 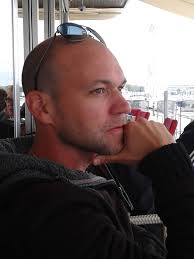 Janne, when did you first realise you had a knack for drawing? What sort of sketches did you accomplish then?

“I guess it occurred to me as a child when my classmates hung over my bench, laughing at my drawings and asked me to draw cartoons of the teachers, often in obscene situations. Which I gladly did.”

Who were some of your early influences?

“Don Martin and MAD magazine. Later on, in my teens, American and South European underground artists.”

I have to ask this but did you have a happy childhood?

“I was fed, I had roof over my head and I was able to breathe.”

When did you start publishing your work and what were some of the places where it first appeared?

“My first hits were in local papers. I recall I won the second prize in some drawing contest. I was probably 9-10 years old. My first ‘real’ published piece (where I was being paid royalty) was in a Swedish comic magazine named MegaPyton. It was in 1991. A horrible comic strip it was.” 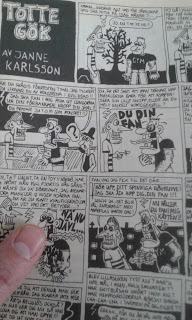 How did you arrive at your current style of illustration?

“ I was fed up with drawing these endless details, and kind of realized that everything looks better when you keep it simple. Also, the older I get, the more impatient I become. I need to make it fast and get onto the next project.”

Do you have a set routine when you go about drawing & writing? Do you create everyday? Do you work quickly without much revision?

“No. I draw because I have to. It could be anywhere, anytime, in any medium. Drawing is what keeps me somewhat mentally stable. Yes, I pretty much create everyday. My anxiety never takes a rest. Quickly and very seldom with any revision. If the ‘feel’ of the piece is right, then the drawing is right too.”

Your work has appeared in over 300 magazines worldwide and you have published several books to date. What have been some of your major achievements to date?

“Drawing for and being paid by both the Catholic Church of Sweden and the Hells Angels at the same time.”

No one is really listening to us right now, but tell me mate, are you really like many of the mad fuckers that you create on your pages?

“Hahaha! You´ll have to ask my girlfriend!”

Turning to one of your latest books, Embracing the Flames why did you decide to publish it through Leaf Garden Press, rather than say, your own publishing company?

“Because I´m lousy at marketing. Come the day when I can actually make some sales and profit off the Svensk Apache books, I´ll never EVER turn to any other publisher.”

Is there much ink left up there? What current projects are you working on now?
Have you ever seriously contemplated longer projects, such as a graphic novel?

Thanks again Janne for your time!

Bio: Janne Karlsson is an artist from Sweden. His surreal and grotesque comics and illustrations have been published in over 300 magazines around the world, and his many books are available at Amazon: http://www.amazon.com/s?ie=UTF8&page=1&rh=n%3A283155%2Cp_27%3AJanne%20Karlsson

You can reach him at: jan-karlsson@hotmail.com