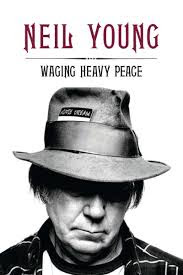 This is Neil Young’s first book and was apparently started after he stubbed his little toe on a rock at his Broken Arrow Ranch pool and broke it. At the time, Young was experiencing a writers’ block and found it difficult to write songs to his satisfaction. The book becomes a kind of refuge for Young, to keep him off the stage so he could “go away and replenish” his craft.

As Young explains: “We were together and celebrating Father’s day and all was cool. That’s when I stubbed my toe on a rock and broke it. My little toe! So I have to slow down. That’s why I am writing this book now.  Or maybe it’s because I’m not smoking weed anymore. I am a lot more focused now. That’s odd. On one hand, I am wondering whether I can write songs straight, and on the other hand, I am saying that because I am straight I am probably writing this book. Someone should take note of that for his or her own research on the subject of sobriety, but not me.”

Young’s auto-biography is non-chronological. He seems to have the freedom to write whatever enters his mind, and as he jokes, with minimal editing. His writing is casual and highly conversational. He makes you feel as if he is directly talking to you.

Young takes the reader through his vast musical career and the many fingers he has in pies. His relationship with his family, his obsessive interest in motor vehicles & miniature trains, his involvement in various bands and his health concerns are all intimately discussed. My main interest, however in writing this review is in what Neil Young has to say about writing this book and about his song-writing craft. 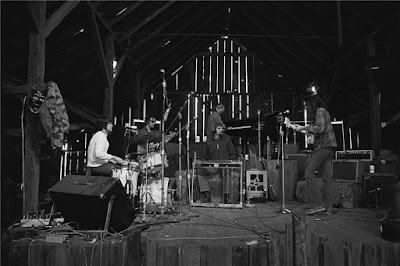 The title Waging Heavy Peace is in reference to Young’s interest in the start-up company PureTone (now known as Pono Music) in which he hoped to develop a high resolution digital player to challenge the poor audio quality of Apple’s iTunes Store. In talking to most serious musicians, Young believed they were unimpressed & depressed with the quality of sound available. After his son Ben’s caregiver heard PureTone for the first time, he asked Young whether he was making war on Apple. He simply said, “No. I’m waging heavy peace.”

Young provides some key insights into his art. As a teenager in the Winnipeg band the Squires, he realised that what set the band apart from most others was their ability to create original music. As a young musician, he never found it difficult to compose songs, “I never had to try to write. I learned to be ready to write when an idea came into my head, whether it was school or wherever. I learned to drop everything else and pay attention to the song I was hearing. The more I did that, the more songs I heard.” 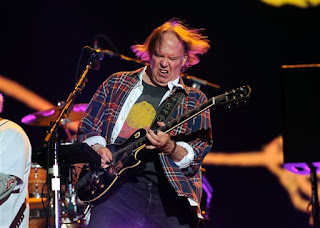 Young expands on his creative process in Chapter Twenty-One. He tells us unsurprisingly that song writing is essentially an intuitive process, “Have you ever wondered what goes into writing a song? I wish I could tell you the exact ingredients, but there is nothing specific that comes to mind. It seems to me that songs are a product of experience and a cosmic alignment of circumstance. That is, who you are and how you feel at a certain time.”

Young says his songs start with a feeling, “I can hear something in my head or feel it in my heart. It may be that I just picked up the guitar and mindlessly started playing. That’s the way a lot of songs begin. When you do that, you are not thinking. Thinking is the worst thing for writing a song. So you just start playing and something new comes out. Where does it come from? Who cares? Just keep it and go with it. That’s what I do. I never judge it. I believe it. It came as a gift when I picked up my musical instrument and it came through me playing with the instrument. The chords and melody just appeared. Now is not the time for interrogation or analysis. Now is the time to get to know the song, not change it before you even know it. It is like a wild animal, a living thing. Be careful not to scare it away. That’s my method, or one of my methods, at least.”

The songs become “like children” to him and “they are born and raised and sent out into the world to fend for themselves.”

Young is writing Waging Heavy Peace because he is pissed-off at his present attempts at writing new songs, “I am currently tired of my musical self. I have reached a point where I have OD’d. When this happens, it is temporary, but my capacity to enjoy music disappears totally. Everything I think of musically is a joke and I reject it completely. That is apart of the process. It has happened a few times before. The last time was near the end of 2009; I finished that tour and had to stop.”

We learn later that Neil Young’s doctor has advised him not to smoke grass but as a result of his clear head, he hasn’t been able “to write any songs for a while,” actually for the entire year he took in writing the book.  In Chapter Sixty-Four he re-examines this song writing block dilemma, “I always wrote when I was high before. Getting high is something I used to do to forget one world’s realities and slip into the world, where all the melodies and words come together in a thoughtless and random way like a gift. I always have said that thinking is the worst thing for music, and now I would like to know how to get back into music without getting high. Some people are probably saying I should get high and write some songs ‘cause that works. My doctor does not think that is good for my brain.” Young fears he is developing dementia which also afflicted his dad Scott. 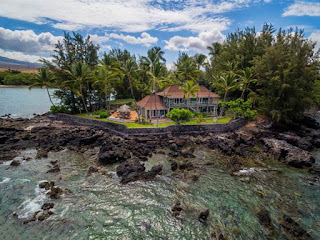 In 2011 Young flies to his property in Hawaii (recently sold for $20 million after the break-up with his third wife Pegi of 36 years) and now clearly takes delight in his emerging book, “Writing this book, there seems to be no end to the information flowing through me. There is always more waiting to come out, whereas songs are nowhere to be found at the moment.” He fancies himself as a book writer for the rest of his life “churning out books one after another to the endless interest of, say, fourteen people with Kindles.” About half through the book as an aside Young says, “I do enjoy writing and I hope someone gets something interesting out of this book. I already have. Now, if I ever have to write a book that is not about me, I may be totally stumped and have writer’s block. We will see. Writing is very convenient, has a low expense, and is a great way to pass the time. I highly recommend it to any old rocker who is out of cash and doesn’t know what to do next. You could hire someone else to write it for you if you can’t write yourself. He finishes with a word of warning, “Just don’t hire some sweaty hack who asks you questions for years and twists them into his own vision of what is right and wrong. Try to avoid that.” Young enjoys the writing process so much he reckons “there may be more than one book.” His follow up book documented his obsession with cars: Special Deluxe: A Memoir of Life & Cars (2014). 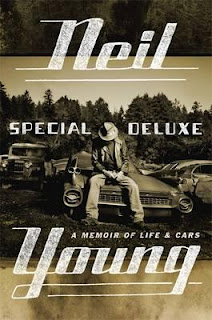 As a final observation it is interesting to note Young’s approach to creating words as opposed to music. On words he says, “I have looked up many words I could have used in the thesaurus, but that is not my style. I prefer to be boring and use the same words over and over, because that is more true to who I really am. That may not work for you if you pride yourself on your great vocabulary.” Earlier, in describing his style he says bluntly, “I am not interested in form for form’s sake. So if you are having trouble reading this, give it to someone else.”

On music he says in the opening pages, “Being a musician enables a person to bend the notes and express things that are inside you, no matter what. That is probably why I am so happy when I am playing music or making a record. “ In a rare and highly memorial passage in the book Neil Young describes playing a guitar solo on ‘Father John’ for the Squires in a Fort William, Ontario club “When the instrumental break came along for the song, I just went crazy on the guitar solo. I had just started to do that. One night it just happened, and now I was doing it all the time.” It was a turning point in his musical career,” I knew that while I was playing like that I was out of my mind. It felt right, but I don’t know what it was. Every note was out of the blue! I went places I had never gone before with no fear… That was the beginning of something. I knew I was doing something that had just come out of me, not something I learned, but something that was me.”

If you are a long term follower of Neil Young’s music you will enjoy Waging Heavy Peace. I found some of the details rather vague and after 502 pages I felt I hadn’t really amassed much information about his life. I did like the free flowing way the book evolved and the dozens of photos included were excellent in supplementing his life story.
Posted by BOLD MONKEY at 2:42 PM