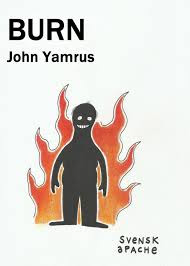 The American poet John Yamrus and the Swedish artist Jan Karlsson again join forces to inflict literary mayhem on the Western world. This chapbook consists of 12 poems by Yamrus together with 12 full page illustrations by Karlsson.

Yamrus loves kicking the backside of the literary establishment. In this volume he condemns the uselessness of writing workshops, the seriousness to which some poets take their craft & the lack of what most ultimately have to say or actually achieve.

In the poem ‘when’ Yamrus playfully questions the very nature of what Art is: (Reprinted with the permission of the publisher)

Karlsson’s visual representations of Yamrus’ poems add a layer of complexity and humour to Yamrus’s work. Karlsson’s world is inhabited by simple but zany ghost-like folk who shriek in pain or laughter, but who in the end, like Yamrus, just want to get on & enjoy life. 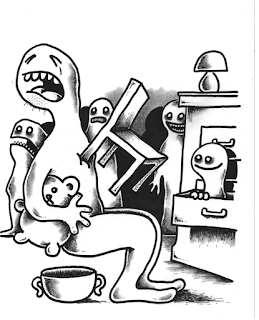 (Reprinted with the permission of the publisher)

This chapbook is beautifully smooth to hold & provides a brief, original take on life by two of the world's best practitioners of their art.

Find out more about John Yamrus’ poetry on his site here: http://www.johnyamrus.com/

Shooting Gallery Vultures   is a collaboration  between the Oregon based poet Scott Wozniak and the American graphic artist Andrew Nut...