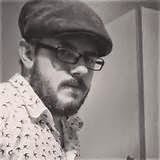 I should be sleeping. But who sleeps in this heat? In a few hours this road will be bumper to bumper. But right now it belongs to me. Rolling down this hill brings the still air to life and dries the sweat as it blows up the legs of my shorts. I had to get out. I couldn't stand another night in that room sweating it out in bed; waiting, like all the other grey-city people, for the sun to prompt yet another into motion.

The park I just passed will soon be emptied of its night-shadows and filled with joggers and dog walkers. Birdsong and beauty will be drowned out by the unnatural course of things, by the call of the sun and the obedience it demands.  The city will come to life and all its anger will rise to the surface and scream. Sirens and alarms will screech and moan. Cars, vans, trucks and taxi cabs will cough and groan. Busses will carry all those morning people to their morning destinations; schools, factories offices and the like. The world as we understand it will shrink and its air will be stale and we will breathe it in and blow it out, as is our custom.

At the hill's foot I turn sharply, resisting the urge to ease the risk with my breaks. I almost lose it, almost. The lights from the twenty-four hour petrol station catch my attention. Its night worker is staring out from the night-hatch. His chin cradled on two palms, his elbows pressed onto the counter as though they are stuck, rooted even. I stop outside the barbers and roll a cigarette. I should get my hair cut. Go in there and have him cut it right down to the nub. It's too bloody hot for hair.

The barbers and the massage parlour are on flat ground. The effort it will take to build up momentum won't justify the breeze. I strike a match, light my cigarette and start an idle peddling. A bead of fresh sweat runs through my eyebrow and into my beard. I pass the last shop on the row, a new blue-glass store. It's nice to see the boards removed from the window but the poor bastard won't last. You have to wonder where people get their optimism from. I've never cared much for blue glass but I wish him the best all the same.

I'd like to think I might make it inside the massage parlour one of these days. The palms of my hands are getting clammy just thinking about it.  I've managed to get as far as the front door on a couple of occasions. Nervousness keeps me from knocking though. My hands start shaking and I get that wet-sick saliva at the back of my mouth. Feel inconsolably nauseous and inadequate. I keep telling myself that it only has to happen once. If I could just work through that initial humiliation, the next time and all the times to come would make up for the first. I need to accept the anxiety as a necessary investment. I could get drunk and bang on the door with a 'couldn't give a shit' audacity, but then I'd have to start attending the twelve-step meetings again; and who needs that?

I manage to cycle up a quarter of the hill before I resign myself to walking. I lean on my bicycle as though it were pulling me, rather than me pushing it. I try and think about rolling down the other side but my eyes are stinging from sweat and it's hard to concentrate. Hard to be positive about what's to come when the immediate is so painful. A familiar looking box stands out from the floor. It’s probably nothing of interest but I bend down and pick it up, just in case. It's a discarded Ibuprofen packet. Just as well really as the only rehab I can afford is a faith-based one and I'm not going back there. Back where they strip you of everything. The first one I ever went to didn't believe in any kind of medication. Not even for the schizos and bad-bipolar cases. That is until Mad Marcus stripped down to his bitch tits and testicles and tried to force himself on the pastor's wife.

I stop for a rest and another roll-up on the bridge where I watch a couple of trains pull into the station. I wonder where they have come from, where they are destined and try to decide which of the two is more important. Neither, I conclude and force myself back on the saddle for the final stage of the hill. I can see the school I went to from the top. A horrid white building filled with equally horrid memories. My Father told me that those would be the best days of my life. I wonder if Meat-Head's Father said the same thing before passing away. Meat-Head's classmates decided he had killed his Father, cut off the head and eaten it.

The poor bugger didn't even have a big head. Best days be fucked.

I reward my aching legs by letting them rest on the pedals as I roll into the mouth of the city. Through sporadic traffic, past the train station, the hotel and countless office blocks. I’m almost swallowed by shadows cast from huge billboards which advertise the new Spider-Man movie and Coca-Cola and other such distractions. I should have bought a coke when I passed the petrol station. The cold can in my pocket would have felt good. I'm so thirsty.  I've cooled down considerably by the time I get to the harbour; hopefully the river air will keep me that way.

I wrap my bicycle chain around wrought-iron railings and roll the combination lock to my birth year, 1979. The year Charles Mingus left this world. I don't know why I always think about Mingus dying the year I was born. I have no musical ability and don't really get jazz. Perhaps it has something to do with the injustice of it all. After all, he made room for me. And what have I done with it? I could learn to play the bass I suppose. It's not too late. I don't think it is, anyway. Truth be told, I hope it is.

I roll up a cigarette and take to walking. The river is romantic at this hour, it clinks and splashes against the boats with reassuring sounds you won't hear during the day. The current and its ripples bring movement to the dead lights that spill over the water. The sun will ruin all of that soon enough. Some of the barges are lit inside. I wish I lived on a boat. Gently rocking on the water would help me sleep. I think I'd have a better chance at happiness on a boat. Happiness! I feel the back of my neck turning red at the thought of it. What the hell gives me the right?

The traffic is building on the other side of the river. The still city air is filling with distant sirens and car horns.  Soon the static cranes in this city’s many areas of so called construction will spring to life, reach above the skyline and prick the clouds. When I was a child I wanted to grow up into an adult's freedom and do childish things. Like climb up one of those metal beasts and look down on the whole world. If not for the fear of heights I grew into, I'd cycle over there now, and do it.

I sit down on a bench. The cold metal feels good against the backs of my legs. The sun is starting to rise, the waiting is over and all the grey-city people are obediently, getting ready for yet another day.