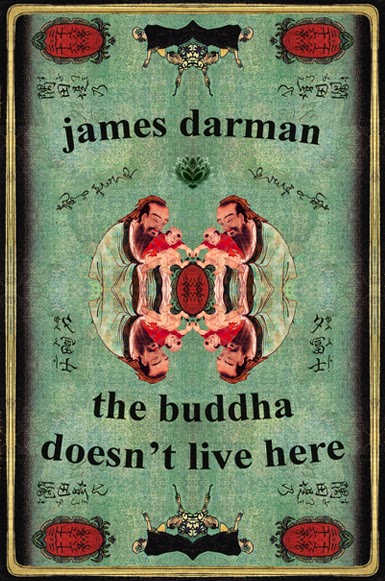 the buddha doesn’t live here is James Darman’s third collection of poetry. I tried to contact Darman for this review but he cannot be located. He is most likely living in a squat & roaming the streets of Hartford, Connecticut where he grew up. His blog provides no answers- it has been dormant since 2011. http://jamesdarman.blogspot.com.au/  Darman’s publisher, Wolfgang Carstens of Epic Rites Press, is concerned and fears the worst. Carsten says, “Unfortunately, as a ‘street person’ James has been missing in action for about two years. I haven’t heard from him. In fact, he’s never seen his book; at least not to my knowledge. I fear he may be dead.”

There are thirty-three poems in this slim book. About ten have previously appeared in Rob Plath’s short-lived on-line mag ‘Exuberant Ashtray’: http://rsplath.wordpress.com/2009/01/05/111/  the buddha doesn’t live here derives its name from the seven page narrative title poem. The persona, presumably the poet, lives in extreme poverty in a derelict house. He takes the reader on a guided tour through his house and onto the neighbouring cold streets.  As he enters a coffee shop, he notices a smiling picture of the Buddha on the wall and concludes, “2515 Manton St./ the Buddha doesn’t/ live here/ he dwells nowhere at all/ this house is perfectly empty.” Instead like John Locke, Darman surmises that the source of his knowledge derives from his senses rather than from some unseen world beyond: “these/ weather-beaten bones/ accept/ the cold rain/ thru every pore”.

Darman is a poet of despair who has been highly influenced by the American poet Rob Plath’s style and subject matter. Both use free verse with a leaning towards lower-case & truncated words. Both pare their poems to the bone and write confessional poetry to document the pain of their descent into some sort of undefinable existential void.

In Darman’s world there is no god. He believes we are trapped by a system heavily weighted against us and that our ultimate purpose is to learn to face the meaninglessness of existence alone. Wine and quiet reflection can sometimes help make life more bearable but death is our only reprieve. Darman seems to revere squalor and a monk-like silence punctuates his verse. He lives fully aware that he lacks ambition and that his life is disintegrating all around him, “I am-// 10,000 things/ turning to dust”- without regret or self-pity.

Most of Darman’s shorter poems reflect these core ideas and values. He often structures his poems around a personal anecdote which provokes an intense realisation in the poet which he conveys to the reader through a bleak but highly memorable image- often related to his preoccupation with death. In ‘COLD CHICKEN & WINE BLUES’ the poet sits on the porch and tersely concludes, “I drink the wine/ w/a feeling/ that something/ is dying/ from the/ ground/ up.” In ‘THE EMPTINESS OF A WINE BOTTLE’ he examines a wine bottle and joins the dots that “this empty/ green bottle/ will be large/ enough//to hold my/ bones one day.” In ‘ONLY THE GARDENER KNOWS’ he imagines he is dead and his memorial plaque is revealed to the gardener, “one day the gardener/ will run his blades/ across the grass// & only he will know/ my name.” This pervading morbid preoccupation with death is furthered in the poem ‘EAT, DRINK, WRITE’ where all questions, as innocent as “how is it that you chase butterflies?” inevitably lead the poet to infer that the one and only answer to everything is “Death...!/Madame/ Death...!”

Darman’s originality, in part, derives not only from his stance as a homeless person but also from his ability to achieve a sense of twisted unity in his work through his use of stark natural motifs- birds, beetles, lizards, cats, flowers, stars, sun, sky, home, trees, garden clouds, moon, wine, river- to name a handful of the images which populate his verse. Usually these words have positive connotations, but in Darman’s melancholic hands they often resonate with morbid or sinister associations. In his bed-of-nails figurative take on life, birds shriek “idiot songs”, a morning flower is “torn w/buckshot & suicide”, his chest is “a deep frozen river”, the sun “turns like rancid butter’ and the like. Darman turns natural restorative images inside-out to reveal a dark malise at his core.

In the poem ‘9:05’ even the comforting power of silence becomes a prelude to a ticking-bomb of cancer or madness in his mind:

& the fan’s whirl
& the cat’s tail
keep me company

Some of the longer poems in the collection provide Darman with more scope to develop his ideas and values. The opening poem ‘A POEM FOR BUKOWSI’S JOCKEYS & MY SCROTUM’ appears to be both a tribute and a critique of the dead LA poet. In a series of five poetry letter bombs to Bukowski, Darman develops an unflattering portrait of himself and painfully suggests that Bukowski, although an important role model, could never understand the intricacies of his own sorrow. The last letter in prose poem style concludes in a tragi-comedic way:

i’ve been to the doctor’s office 3 times this week. each time
they gave me a new prescription: Vicodin, doxycycline,
ciprofloxacin, aspirin- my scrotum is still the size of a
softball- we are both sick…& she loves me…i lost 2 teeth
this week. one while eating a pork chop. the other while
smiling…i am sick…Dearest Bukowski- w/flowers & stars
& moons…& death…& butterflies & sparrows…& the
jockeys you left behind…Dearest Bukowski- i am
sick…you were right! most people are milktoast- most
people can’t change a flat tire…most people will never get
the drinking, writing or living right.”

One of the best poems in the collection is ‘TO TEAR THE WINGS OFF.’

TO TEAR THE WINGS OFF

or the voice across the room
taller than Mt. Kilimanjaro

against the backdrop of cheap French wallpaper

or the fact that there is no food in the house

The beauty of the poem lies in its rebelliousness but also in the understated way in which it rejects mainstream American values. The listing of its complaints about society’s expectations- a nice family, car and job- recalls Bukowski’s poem ‘machineguns towers & timeclocks’ from his Crucifix in a Deathhand collection. Where this poem goes a step further is in its denial of betterment, in its caustic incorrigible view of the damaged.

This is a relentlessly dark collection from the rare perspective of a homeless man. From his “lifetime/ of park benches…of hard floors” Darman speculates not only about his own physical and mental demise but also about humanity’s inevitable collapse as is foreshadowed in ‘A REMINDER’. Despite the poverty and isolation, Darman finds pleasure in his surroundings. In ‘TONIGHT THE STARS’ he gazes through a large hole in the ceiling and wryly concludes, “the stars look good tonight w/a half a bottle of wine”. In ‘SONG FOR MY PALLBEARERS’ he recognises that death fills his heart but he wishes he has more life, “fill my cup again dear friend/ there has never been enough!”

From the “weeds & wildflowers” of his mind, Darman has thrown us this bright brittle gem from the American underclass. I hope one day that James Darman will resurface- but not with a new found god or love, or cheery, self-satisfied smile.