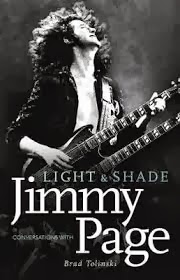 In his introductory ‘Overture’ Brad Tolinski explains that Light & Shade is not a “tell-all biography” but rather “(I hope) an enlightening and definitive look at the musical life of a rock and roll genius, told in his own words.” Tolinski believes “that Page is one of the most important and under appreciated musicians of the last century” and therefore wants to share with the reader his discussions with Jimmy Page and other important musicians who have worked with Page over the years, including Jeff Beck, John Paul Jones, Jack White (White Stripes) and Paul Rodgers (Bad Company).

As editor in chief of Guitar World, Brad Tolinski first interviewed Jimmy Page in 1993 and over the past two decades has had many opportunities to chat with Page about his long career as guitarist, composer and producer. The conversations were polite and honest as long as Tolinski followed a few unspoken ground rules: “He expected me to have assiduously done my homework, to have the facts at hand, and to ensure that, to the greatest possible extent, our conversation focused on music.”

Light & Shade includes conversations with Jimmy Page which cover the full gamut of his musical career- memories of his first guitar, his recollections as a British session guitarist, his career with the Yardbirds and Led Zeppelin and his subsequent ventures- such as The Firm and the Coverdale and Page Project after Led Zeppelin split up following drummer John Bonham’s tragic death in 1980. The focus is refreshingly always on the music, and although sometimes overly technical in its discussion of guitars and amps, the book is usually pitched at the general reader.

The book is nicely sculpted into chapters which are divided into three sections. Firstly, Tolinski provides a short, insightful narrative in which he establishes the context of a significant event in Page’s life. The heading will point to the chapter’s focus. This is followed by CONVERSATION Q which will provide a detailed interview with the musician related to a specific event. The third section MUSICAL INTERLUDE brings in other voices, to provide a different perspective on the events and personalities earlier discussed.

Chapter 3, for instance, is entitled “Jimmy Joins the Yardbirds, Learns How to be a Rock Star, and Builds the Foundation for Led Zeppelin.” Section 2 includes fourteen questions  to Jimmy about his contribution to the band and his thoughts on Eric Clapton and Jeff Beck. In the third section the Yardbird’s rhythm guitarist, Chris Dreja talks about his experiences in the band.

As Tolenski points out in Chapter 2, Page worked as a studio guitarist between 1963-1964  and contributed to hundreds of songs including the Kinks’ 1964 debut album, the Who’s “I Can’t Explain”, Tom Jones’ “It’s Not Unusual” and Shirley Bassey’s “Goldfinger". He had his hand on the pulse and “was often the first to learn about the latest technological innovations”, including Roger Mayer’s fuzz pedal. “He became proficient in a broad array of styles multiple genres to deliver dynamic and solo and rhythm parts under great pressure.” He also learnt how to produce studio sessions by watching the best. After Eric Clapton left the Yardbirds in 1965 he was asked for a second time to join the band.

The section on the Yardbirds is comparatively weak and focusses on management issues and the changes in the band’s line-up rather than on a detailed discussion of Page’s experimentations in guitar language. If you are unfamiliar with the Yardbirds, it’s interesting to see Page in action, although sometimes as a headless guitar player. Here are a few songs discussed in Chapter 3 which you can find on YouTube:

An excellent clip with Jeff Beck & Jimmy Page in the Yardbirds: http://www.youtube.com/watch?v=w9fZ7oydsl4

As you would expect the most interesting chapters in Light & Shade are Chapters 4-8 (roughly half the book) which discuss in detail Jimmy Page’s involvement  with Led Zeppelin. What you sense in reading these chapters is the extraordinary spontaneity and vitality of the band- how it was able to summon on the run incredibly tight, innovative & improvisational music.

In discussing his epic performance of 'Since I've Been Loving You' Page talks about pushing the envelop rather than pleasing the blues purists: "I wasn't interested in performing a note-for-note rendition to prove to everyone I could play in a certain style. I always approached the blues with a rock and roll rhythm to the phrasing, so whatever I would play was already going to be different." In discussing Led Zeppelin III with Jack White and Tolinski, he says: "The key is you don't want to copy the blues; you want to capture the mood. On III, we knew we wanted to allude to the country blues but, in the tradition of the style, we felt it had to be spontaneous and immediate. I had this old Vox amp, and one day Robert (Plant) plugged his mike into the amp's tremolo channel, and I started playing and he started singing. And what you hear on the album is essentially an edit of our first two takes. The band had an incredibly empathy that allowed us to do things like that."  In elaborating how it is easy to play like Stevie Ray Vaughan and difficult to play like Son House he says, "Technique plays a part- you have to know how to play. But what is important is the pursuit of something new and capturing the moment. Every band I've played in did a great deal of improvisation onstage, which is where the real magic takes place. That's where the real drama happens. You might fuck up, but that's also part of it. It's the tension that makes it exciting. Great music is never safe or predictable." During recording the album Physical Graffiti at the stately manor Headley Grange a session had been going nowhere fast. John Bonham starting drumming the opening riff to Little Richard's 'Keep A-Knockin' and Page spontaneously started improvising on his 1959 Les Paul and it felt so good that he said, "Stop let's work on this." "That's how it was going back then," Page says. "If something felt right, we didn't question it. If something really magical is coming through, then you follow it . It was all part of the process. We had to explore, we had to delve. We tried to take advantage of everything that was being offered to us."

For guitar freaks two Musical Interlude sections will be of special interest which will make them foam at the mouth. In Chapter 8 the guitar musicologist Jimmy Brown picks ten songs that demonstrate what makes Jimmy Page’s Playing Unique. Number 1 is “Since I’ve Been Loving You” from Led Zeppelin III. #2 Dazed and Confused -live version- The Song Remains the Same. #3 Achilles Last Stand- Presence. The chords and notes of each song are concisely but expertly discussed. In Chapter 10 there is a section “An Inventory of Jimmy Page’s Primary Guitars, Amps and Effects” which provides a brief guide to his equipment and on what albums they were used. The cover shot, for example, features Jimmy playing his iconic 1971 Gibson EDS-1275 6/12 double-neck guitar.

Danny Goldberg, a publicist for Led Zeppelin from 1973, insists despite all the partying, the band agonised over every detail: "They did meticulous sound checks; they rehearsed; they worried about the lights, the sound, the set list. There was nothing lax about the way they did things."

It is interesting to note that Page's favourite album is Presence despite its comparative lack of commercial success.

A quick survey of significant Led Zeppelin clips on Youtube bring these up:

Since I’ve Been Loving You:

Here are a couple of great clips post Zeplin: http://www.youtube.com/watch?v=xoPUDOgcFWY

Asked by Tolinski how he would like people to see his role in Led Zeppelin, Jimmy Page replies: "Many people think of me as a riff guitarist, but I think of myself in broader terms. As a musician, I think my greatest achievement has been to create unexpected melodies and harmonies within a rock and roll framework. And as a producer, I would like to be remembered as someone who was able to sustain a band of unquestionable individual talent and push it to the forefront during its working career. I think I really captured the best of our output, growth, change, and maturity on tape- the mutifaceted gem that is Led Zeppelin."

Overall, this is an intelligent & well structured book. It telescopes the events in Jimmy Page's life without resorting to deadening detail. The focus is always on the music rather than the peripheral drug taking and hotel trashings. And as many of the conversations are in Page's own words the reader can rely on the authenticity of the events described therein. 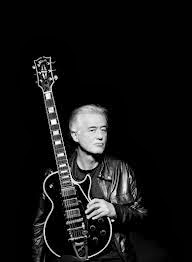