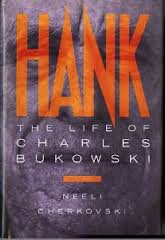 I recently came across a cheap hard-covered first edition of this book (less than $5) and was curious as to how it lined up to other Bukowski biographies that I have read. Cherkovski and Bukowski were not intimate friends but more casual acquaintances who shared the thankless task of wanting to bring poetry to the masses. Cherkovski first met Bukowski in LA in 1962 as a teenager through his parents and in 1969 co-edited with him the short-lived literary magazine ‘Laugh Literary and Man the Humping Guns’. In the early 1970s they had a falling out when Bukowski wrote a nasty article about Cherkovski in the LA Press. Bukowski declared that there were three famous woman poets in the world and that Neeli was the third. Cherkovski continued to follow Bukowski’s work and contacted him after the publication of Ham on Rye, and later, after the film Barfly was released. In 1987 Cherkovski suggested to Bukowski that he was interested in writing a full-length biography about him. ‘Jesus, I’d be honored,’ Bukowski told him. Two others have tried but I have faith in you kid. Although I don’t know who would buy such a thing.’ According to the Source Notes, Cherkovski interviewed Bukowski six times between March 1988 and January 1989 for HANK.

This is the first full-length biography written about Bukowski. It establishes the chronology of the significant events in his life- his terrible childhood, his struggle to become a writer, the women in his life and his eventual literary successes and rising popularity. It combines biography, literary analysis and personal reflections on Bukowski.  The writing is clear but often general in detail and remote in tone. Although Cherkovski includes many anecdotes and quotes from Bukowski, you don’t get a credible feel for the mad swirling genius who machine guns the words across the page in his stories and poems and letters.

The book appears top-heavy in relation to Bukowski's early life with two-thirds of the narrative leading up to his departure from the Post Office in 1970, with only eighty pages devoted to1970-1991. Bukowski’s major publications and the contexts in which they were written are quickly skimmed over at a cracking pace. The most engaging chapter is XV: Bukowsi in the Eighties: A personal Memoir in which Cherkovski outlines his association with Bukowski over the years.

I recently read in a Bukowski letter to Kevin Ring (Charles Bukowski Reach for the Sun- Selected Letters 1978-1994 Volume 3) that he wasn’t very impressed with this book, ‘On Hank, I am very disappointed in the book. It is virtually unreadable. Very bad writing. Dull, inept. I gave Neeli hours of tape, really good stuff, of wild and wonderful times, crazy times, deadly times but he put none of it in. he has lived a very protective life, so unsubconsciously I guess he didn’t believe the things I had been through. Also, various inaccuracies. There’s one where he has me trying to hit Linda King with a frying pan. I never told him that.’ Bukowski reckoned that it was Linda King who was trying to hit him but Cherkovski published the incident arse-backwards because he didn’t want to get sued by Linda. A few weeks later he writes Tom Chivens, ‘Forget the N. Cherry, Hank. Very bad piece of reporting. I gave him the juice on tape, he took the rinds. Outside of that, he doesn’t know how to write.’ I wonder what ‘juice’ Cherkovski left out of Bukowski’s intereview tapes to infuriate him so much. Do the tapes still exist? Nothing is mentioned in Calonne’s recent scholarly study Charles Bukowski, which includes forty-two pages of references, notes and acknowledgements.

Apart from the flat, largely factual accumulation of detail from Bukowski's life, even the casual observer can quickly make out why Buk was pissed off at Cherkovski's representation of him. Most tellingly, Bukowski is overall portrayed as a self-centered & obnoxious drunk who has a pathological jealousy which manifests itself in his fear that every man wants to fuck his women. Cherkovski, for example, provides a rather sympathetic portrait of Linda King. When Linda was recuperating from a recent miscarriage Bukowski told her indifferently that he had a new girlfriend. Linda King says, 'He wanted to incite my jealously about a new woman'.

Cherkovski also makes clear that he considers Bukowski's earlier poetry superior to his later more pared- down stuff. He says, 'In Dangling in the Tournefortia I found Hank's poetic style truly transformed. The new poems did not have the rhythmic proficiency that made his earlier poems so interesting...He had opted for a massive outpouring of emotions, caring little for the well-shaped, hypercrafted poem'. This a common debate topic amongst Bukowski readers and largely resolved through your own multiple readings and enjoyment of the variety of his poems.

In terms of the quality of the writing and the depth of research undertaken, HANK ranks well below the other Bukowski biographies I have read: Howard Sounes CHARLES BUKOWSKI: Locked in  the Arms of a Crazy Life (1998), David Stephen Calonne Charles Bukowski (2012) and Barry Miles Charles Bukowski (2005). It might be some years before a solid 1000+ page literary biography appears about his life & works.