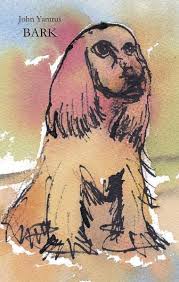 In John Yamrus’s twentieth book BARK, he collects twenty-three of his dog related poems. The poems are characteristically written in Yamrus’s pared down, first person/ conversational, free verse style. The poems are often sparked by an ordinary event- a visit to the vet, watching his dog sleep on the couch next to him or attending a dog obedience class. The book is dedicated to ‘all the great dogs’ he has known and loved over the years, including four of his own, Abby, Mika, Phoebe and Ito. In the interview with Yamrus which follows, he says that the book has exposed his writing to a ‘whole bunch of new readers...people who might not normally read poetry.  especially the type of half-ass'd poetry that i write’.

The front cover features a water colour of a dog by the Swedish painter and poet Henry Denander. The dog is alert and inquisitive and watchful of its master. The title BARK is a reference to the opening poem ‘my dogs’ who bark at everyone and everything and ‘when they’re not barking,/ they’re sitting there/ waiting for something/ to bark at’.

Yamrus is protective of and shows great affection for his dogs. In ‘okay, Mr Death, you win…’ the very presence of his dog brings contentment and a feeling of completeness to him. In ‘she said…’ he sees his bond with his animal as an undefineable pleasure ‘sometimes,/ without it/ even being/ said’. In ‘it’s always something…’ he saves his dog Abbey in his underwear after she falls ‘screaming’ in the swimming pool. He concludes he ‘owed her one’ ‘because that dog/ with her great, grey eyes/ and her absolutely/ crazy way// manages to/ save my/ life//every/ single//day.’ In ‘perfect’ he reads Doctor Zhivago in his sun room and later closes the novel and sees his reflection and that of his dog in the glass. He sums up the image, ‘perfect’.

Yamrus loves his dogs and says bluntly in the accompanying interview, ‘i think i like dogs more than i like people. there's no bullshit about them. no pretense. they are what they are, and you don't have to waste your time trying to figure them out. beyond that, they shit in your yard, not in your soul’. In ‘my dog doesn’t care much’ he likes how his dog has no worldly concerns and does not ask for much: ‘all she wants/ is to have/ her bowl/ filled// her/ head/ scratched// and/ to be/ let out/ when it’s/ time to/ shit.’ In ‘it’s raining now…’ he returns from the groomer’s and is impressed how ‘she knows/ exactly/ how to shake off// what’s bothering her.’ In ‘i just now’ Yamrus tersely tells an interviewer that he writes a lot about dogs because they teach him ‘joy,/ perseverance/ and acceptance,’ ‘total concentration/ on a single task’ and ‘the great secret’ of life that ‘there isn’t any.’

Yamrus is careful not to sketch overly sentimental portraits of dogs or to treat them like pseudo children or to anthropomorphise them.  Yet he provides his dogs with just enough credible, original detail to create unique, sympathetic personalities. In ‘my old dog’s gone deaf’ he writes that he sometimes forgets that his dog can’t hear him, but humorously quips, ‘actually,/ she never really/ listened to me, anyway.’ ‘In dog obedience class…’ his dog Abbey finally ‘paid attention/ and sat and stayed’ like the other dogs, and the rebellious streak in Yamrus raucously concludes, ‘I hated that’.

There are flashes of sentiment in the book but it is a raw, real emotion and never overplayed. In ‘I was just now’ Yamrus finds one of his deceased dog’s balls and as he threw it ‘watching that ball/ come to a stop/ nearly broke/ my heart’. Similarly, in ‘silly me’ his heart sinks when he spots a vet appointment card ‘from a dog/ that died/ two years ago.’

The writing is sparklingly clear and the book can be leisurely read a couple of times within an hour. As I read through the book I thought about the important dogs in my own life- Waldo, Leo, Maggie, Terra and Sugar. The walks, the bike rides, the sagging bags of dog turds and their poignant individual deaths. This collection will stroke the hearts of dog-lovers every where and provoke readers to recall their own companion dog narratives. 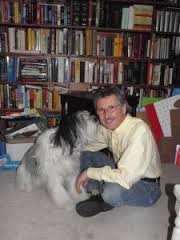 You sometimes use the metaphor that life is a card game. What sort of hand have you been dealt thus far?

Three jacks backed with a bottle of tequila.  i guess i've been lucky so far.  i'm 62, but still waiting to see what happens with the draw.

Your latest book BARK collects twenty-three of your dog related poems. Can you explain what happened behind the scenes that lead to the publication of the book through Epic Rites Press? Who initiated the idea for the book? etc

Well, my readers, (all 9 of them) have been asking me to put out a book of my best poems about dogs for years.  Until now, i never had a publisher who was warm to the idea.  i'm really happy with this book, as it's exposed my writing to a whole new audience...a whole bunch of new readers...people who might not normally read poetry.  especially the type of half-ass'd poetry that i write.

The cover water colour illustration is by Henry Denander and I notice on your website that he has drawn some postcards as well: http://www.johnyamrus.com/ What sort of brief, if any, did you give Denander for BARK?

Denander's one of the greatest artists around.  i wouldn't presume to give someone like him instructions or directions.  i'm just happy and proud to be able to call him my friend.  he included me in his book POETRAITS, which is a collection of his paintings of the faces of modern poetry.  i'm still trying to figure out why he included me.

As you imply in your poem ‘i just now’ the obvious question is: why do you write a lot about dogs?

i think i like dogs more than i like people.  there's no bullshit about them.  no pretense.  they are what they are, and you don't have to waste your time trying to figure them out.  beyond that, they shit in your yard, not in your soul.

Moving on to your writing style, you mention that your writing has gotten simpler the older you get. How do you go about saying more with less? That is, can you briefly outline the mechanics of your writing? Do you have a set routine? Where do the poems come from? Do you do much editing? When do you know when you have cut to the bone?

i try and write every day, but it doesn't always happen, and the poems come from what's happening around me.  i don't make stuff up.  i'm not that smart.  i see things...i write them down...and move on.  i'm not one of those guys who thinks that being a writer is a big deal.  the guy who installed my new generator last week is a big deal.  he gets stuff done.  all i do is hold up a mirror and hope.

In stripping back a poem to its bare essentials did you ever fear that you were dumbing down the language and robbing it of its beauty and complexity of meaning?

not in the least.  what i'm doing...what i'm trying to do...is give the poem back to the reader.  i want to get THEM involved in the process.  like i said...i'm not very smart.  i want their input, so i leave holes in my poems...holes that they can fill with their own ideas.

You refer to Bukowski often in your writing. What do you admire about his writing?

Charles Bukowski is personally liable for pretty much all that's good and all that's bad about "modern" poetry.  people read him and think "i can do that"...not understanding the talent and technique that's behind what he does.  it's very very hard to make it look easy.  Jack Kerouac once said "walking on water wasn't built in a day".

Your poems often depict flawed people trying to understand the complexities and ambiguities of life. They discover a few clues to some possible answers- but ultimately, they don’t seem to get it in the end. What have you ‘got’ as a writer and man that you have passed on to your readers?

when i figure that out, you'll be the first to know.

Do you have other books in the loop for future publication? If so, what are you working on?

i've got a children's book (a first for me) and a book of new poems in the pipe. i'm really a lucky guy.  i've got a great wife...enough money to buy a good bottle of tequila every now and then...and the time and the inclination to write.  it doesn't get any better than that.

thanks!  i appreciate the help and support.