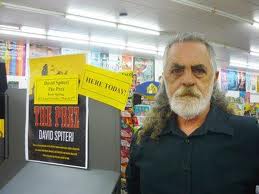 David Spiteri, 63, grew up in western Sydney and was a founding member of one of Australia’s first outlaw motorcycle clubs in the late 1960s. In The Prez, a True Crime memoir, Spiteri fictionalizes his involvement and knowledge of bikie culture up until 1985. The writing is raw, but remarkably accessible and despite the massive size of this book, it is always geared to keep you reading, its throttle cracking wide open, taking you further into the depths of the writer's world. Spiteri is remarkably candid and offers his readers a wealth of credible and highly entertaining anecdotes about motorcycle club sub-culture in Australia.

Spiteri started writing the book about ten years ago while he was recovering in hospital from a serious motorcycle accident. His mates dropped off some books for him to read which were mostly about bikies. He found them exploitive, sensationalist and lacking in soul. He thought he could write better shit and had a good story within him to tell. It took him about seven years to write his book in long hand in big block letters in numerous exercise books. He eventually teamed up with editor Tim Harris who has done an outstanding job in humping into shape Spiteri’s sprawling recollections. As the blurb on the front cover states, Spiteri has had to change the real names of the people involved and to obscure the actual events, such as the 1984 Milperra Massacre, but he insists that ‘what is in the book is 100% true.’

The Prez is a third person narrative told largely from the perspective of Peter Winifred. It charts his beginnings as an eleven year-old in Fairfield, in Sydney’s west, selling horse shit door-to-door with the aim of saving to buy a neighbour’s 250 cc motorbike. When a local fails to pay-up for his shit he learns his first valuable lesson: ‘cash only, no credit.’ He takes a tomahawk to the woman’s prized rose bushes and donates them to the church and they are used as altar flowers.

What follows is a series of further lessons for Winnie and his close mates Brian Corrigan and Big Kev. They learn early that school is not for them and they ‘were not going straight.’ The blokes begin their petty-criminal careers as teenagers by stealing and selling rebirthed bikes. They soon lease a shop and service bikes and sell dope under the counter as a sideline. The club’s illegal activities gradually branch out to growing their own cannabis in greenhouses and later setting up their own meth lab and importing Afghani hash.

Speteri’s main intention is to write a social history about a highly guarded and intensely loyal sub-culture. Speteri says matter-of-factly, ‘Maybe we’re tough on people, but we aren’t bad people.’ This book is surprisingly well written and structured. He uses staunch, no bullshit prose to drive his story. I loved in particular his extensive use of Australian and club idiom which fills every page of this book. If the book is published in America it may require a glossary of terms if the puzzled reception of our films is any guide.

The Prez is written in the context of significant social and legislative change. The club and its members need to secure its operations in the flux of state and federal governments who are passing new laws to restrict or destroy their activities and confiscate their ill-gotten gains. We see the establishment of Strike Forces to investigate the criminal dealings of bikie gangs, new banking laws which make it increasingly difficult to hide assets as well as the introduction of progressive laws which legalize gaming machines and prostitution, previously controlled by criminal gangs.

In some respects, The Prez might be read in the future as a text book in Business Studies for aspirational capitalists. Peter Winifred expresses early in the book that he is a product of houseos in the western suburbs of Sydney and his ambition is to never return to that life. Winifred and his Vice-President Brian Corrigan play the system for all its worth. They extensively network with other clubs, they research their markets, diversify their investment portfolios, they edge out & sometimes take-over the businesses of competitors, they provide their customers’ with a superior and reliable product and they hire an array of accountants, financial advisers and solicitors to legitimize their dealings. When they need further help in consolidating their business interests, they solicit cops, bureaucrats and politicians on the take.

I was highly fascinated by Speteri’s descriptions of the club’s many interesting personalities, the punch-ups, motorcycle runs, drug operations, the club's inner politics and the 'gutting room'. He feeds the reader just enough material to allow us into his world and then leaves it to us to fill in the gaps. The most interesting chapters of the book are multi-stranded, that is, they advance the storyline through a complex series of sub-stories which unfold simultaneously and which sometimes foreshadow future events or link back to previous events. The conclusion of the book is shocking but well prepared for.

You really have to work hard to find weaknesses in The Prez. The section leading up to the book’s climax is overly long and comparatively weak. The depiction of Winifred’s domestic life is awkward and occasionally borders on sentimentality. The depiction of Winifred is perhaps its greatest flaw. For most of the book, he has an answer for everything and never seems to place a foot wrong. He seems incapable of expressing fear and has an intense seriousness which is largely devoid of humour. As a consequence, it is sometimes difficult to emotionally engage with Winifred.  But these are minor blemishes in the context of Speiteri's extraordinarily grand and compelling narrative.

One of the downsides for Spiteri in writing The Prez was that the book brought grief to certain members of his motorcycle club. After 31 years Spiteri chose to resign and donate his colours and custom-built Harley to the club.

The Prez is a compulsory read for anyone interested in knowing more about rebel bikie culture in Australia. My interest in the genre dates back to the iconic films ‘Stone’ and ‘Easy Rider’ and Hunter S. Thompson’s classic book Hell’s Angels. As a comprehensive and authentic Australian bikie tome, Spiteri’s contribution is difficult to overtake.

The photo of David Speteri above was taken at one of his book launches for The Prez and is reproduced here with the author's  permission.
Posted by BOLD MONKEY at 9:10 PM