Mitchell’s slender volume of experimental poetry won the PressPress Chapbook Award in 2009. www.presspress.com.au The book consists of sixteen cutting-edge, but tricky, enigmatic post-modern poems. ‘songs for the ordinary mass’ is the central focus of this short review. If you are more interested in Mitchell’s career as a poet in its many reincarnations, have a close read of his honest and entertaining comments in the extensive interview which follows.

Mitchell is one of the most diverse and original emerging poets working in Western Australia today. He is a ground-breaking poet from the street who uses highly inventive language tools and forms to express his evolving grand vision as an artist. ‘Poetry’, he says, ‘should make people gasp, their heart leap and the toes want to pirouette. It’s the scientific art of language as our fundamental technology. Good poetry should engulf but disappear leaving only the slightest echo of a vision glimpsed and momentarily comprehended in full. It should leave people wanting, hungry and slightly obsessed.’

‘songs for the ordinary mass’ is not about ordinary people. It is centered on Mitchell’s young adult haunt:  Northbridge, Perth’s entertainment area- the city’s ‘cesspool of sin’. The equivalent of Wollongong’s Kenny Street.  Apart from a few snatches of dialogue, the book also does not use the language of ordinary people but is embedded in the coded language of post-structural theorists like Derrida and Foucault.

The language is minimalistic. Hybrid with a pervading meta-tinge: Chucked in a blender then sprinkled on top with aberrant punctuation.

The chapbook begins with a prologue in two parts. Mitchell marks out the territory he is to explore- the rewriting of Northbridge from his own lense, using a mash of found or fragmentary phrases and words. The main section of the book consists of fourteen mostly short poems. These are typically snapshots from the street- about hookers, junkies, urban graffiti artists and drunken hoons written in a cut & paste style integrating pop references, direct speech from the gutter, social or philosophical observations and the like, with the writer and the reader hurtling in a chaotic rush towards  some unknown but inevitable confrontation.

Mitchell’s overall aim is ‘to capture the godlessness of the ghetto and fuse it with an almost liturgical quality’. As he explains in the interview, he adds a complex layer of structure to his work by developing the concept of neumes, or graphic pitches characteristic of traditional Gregorian chants, to evoke the dark resonances of Northbridge’s underworld. Each poem in the main section is a sampling of a different  Gregorian pitch and each title makes a specific allusion to the tone that the poem wishes to covey: caccia, climacus, stretto sone, porrectus & so on:

‘I had been reading, every Saturday, dictionaries in non-sequential ways. The Oxford I did backwards. A crossword dictionary I’d navigate using that Saturday’s crossword puzzle. Finally I hit a musical reference dictionary, which I read by reference notes (i.e. see also this or that). Here, an antiquity of musicality emerged. Words thick with accent and history and an architecture of precision.

And the archaic beauty emerged: antiphonary, a liturgical book containing chants for the office, comprising of The Mass Ordinary and The Mass Proper; fiato, breath; sone, a subjective unit of loudness; and neumes, graphic notational signs indicating a certain pitch to be obtained rather than a note to be carried, the obvious analogy Gregorian Chants. From here emerged the neumes themselves, with odd little names. Northbridge suddenly transformed too’.

These are clever, but obscure poems and I often had to refer back to Mitchell’s own explicit comments from our interview to make better sense of what he was attempting to achieve. Keep in mind that this chapbook represents only a small fraction of Mitchell’s work to date. As he outlines in considerable detail below, he has been involved in the spoken word, meta-narratives, break up letters, reality games, ‘spite of madness’ writing, slam, remix, parkour and other cutting-edge mediums. I urge you to follow up some of his links to his work and influences. The poet Michael Farrell, for example, is a leading exponent of 21st century experimental writing in Australia and certainly worth investigating.

All that said, ‘songs for the ordinary mass’ is the smallest sized chapbook I have ever purchased. It measures about 6 x 4 inches and cutely fits into its cover sleeve. Overall, the word count is small but the editing excellent and the quality high. The book costs $10 and makes a significant contribution to PressPress’s recent drive to publish innovative Australian poets. Find their latest chapbooks here: http://members.ozemail.com.au/~writerslink/PressPress/PressPress_Home.html

BIO:  Scott-Patrick Mitchell is a poet & writer who lives in Perth, Western Australia. He works as an arts and fashion journalist for OUTinPerth Newspaper and volunteers as a poetry editor for dotdotdash. His poems are typically intense experiments in sound & rhythm, of constraint and explosion, balanced with performative works which explore the resonance of an actual voice. He has been a guest of the National Young Writers’ Festival and the Emerging Writers’ Festival and in 2009 he won The PressPress Chapbook Award for songs for the ordinary mass, a collection which fuses urban sampling with Gregorian musical notations. He recently won the Perth Poetry Slam and was accepted as one of three emerging West Australian poets to appear in Fremantle Press’ latest release New Poets. Scott-Patrick has been accepted into WAAPA at Edith Cowan University where he will complete a Masters in Performance Poetry, upgrading to a PhD in 2011. He is the only person in the state currently studying this topic at this level. From this he will produce a full length collection of poetry plus a one-man show, which he hopes to tour New York and London with, showcasing it to the international performance poets he is currently interviewing as part of his thesis. In early 2011 he will release two e-books, one through Black Rider Press and the other as experiment in remixed experience written in collaboration with Matt Hall and Siobhan Hodge.  In his down time he blogs about street art and buys far too many clothes.

It’s doing a mash. The piece begins with a found text from the East Coast. It then bloats itself on the importance of achingly overwrought definition, juxting that with slogans – these 2wo segments attempt to define the nature of street art. What follows are musing’s on street artists. For example, The Yok is actually the successful Asian diffusion line of Hitchcock, implemented around 2003 or 2004. He’s now internationally recognised as The Yok. In part ii, a street artist called Victim would actually stencil a council worker painting the wall whenever the council painted over, or buffed, a piece of graffiti. They were the victims Victim was giving voice to. From there the piece examines the practice of ‘vandalising the vandal’, a reverse form of community service where you actually steal the graffiti from the street for your own collection. The community service is a double entrende: on one hand you cleaning up the streets, but on the other you are protecting the art with the intention of it having a future, either in a private collection or possible future public collection.
I have been ‘collecting’ street art for years. I’ve also been photographing it too since 2004 and have over 5000 photographs. I write a regular column about it plus blog the images at http://perthstreetart.tumblr.com with the hope of publishing a book on it in the future.
The list of names are names of actual Perth street artists. 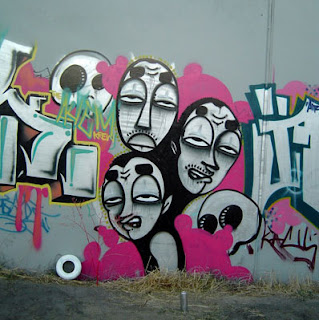